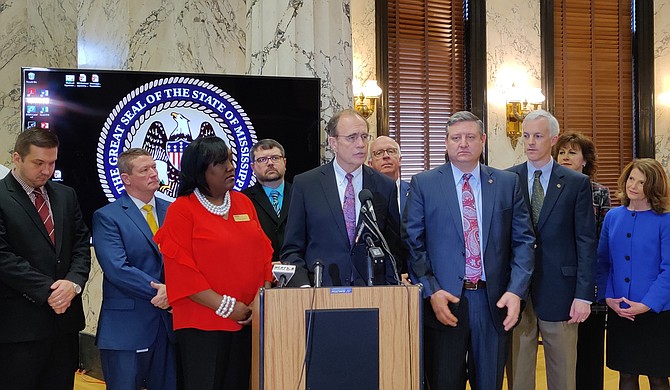 Lt. Gov. Delbert Hosemann (center) made good on his promise of swift action on teacher pay, shepherding a bill for a first raise through the House Education Committee. But more is needed to achieve both his and Gov. Reeves’ goals. Photo by Nick Judin

Rep. Hester Jackson-McCray walked the halls of the state Capitol with a jubilant smile on her face, flanked by her team. Last November, the Horn Lake Democrat convinced 1,553 voters near Horn Lake and Southaven to vote for her. On Wednesday, Jan. 29, she received only five new votes. But that was all it took to keep her in the Mississippi House of Representatives—as long as the full body agrees.

The House Special Election Committee tasked with investigating the race unanimously voted to keep Jackson-McCray in the Legislature after a long and emotionally charged public hearing. White Republican incumbent Ashley Henley had challenged Jackson-McCray's victory over her in the Republican-controlled House rather than through the courts where most election challenges land.

As of press time, the House had not voted on the final measure, but Rep. Rob Roberson, R-Starkville, told the Jackson Free Press he is confident the House will accept the committee's recommendation.

After four hours of testimony and deliberation, the committee of four Republicans and one Democrat voted 5-0 to recommend the House uphold the results of the election. The decision is not expected to change the makeup of the Legislature: The House sat Jackson-McCray with all the other representatives at the beginning of the term.

As promised, Lt. Gov. Delbert Hosemann began the process of raising teacher pay on Thursday, Jan. 30. Senate Bill 2001 proposes a $1,000 raise for all public-school teachers in the state. The bill would also bring the bottom bracket for new teachers to $37,000. SB 2001 sailed through the Senate Education Committee on Jan. 30. SB 2001 is the first Senate bill this term.

SB 2001 must now pass the Senate Appropriations Committee, survive a final Senate vote, and then to House Speaker Philip Gunn, who will refer the bill to relevant committees in the House.

The bill does not yet accomplish the full measure of teacher pay raises that Hosemann and Gov. Reeves promised. Additional raises will come at a later date, Hosemann said, indicating that SB 2001 may not be the last word on teacher pay this session.

In addition to bills addressing educator compensation, DeBar promised to meet with teachers after the session ends to plan out initiatives for improving Mississippi's education system in coming years.

Hosemann also spoke of plans to raise salaries of numerous other state employees. "We have other state employees who are woefully undercompensated," he said. "We have over 1,000 employees working full time for the State of Mississippi whose gross salary is less than $20,000. First of all, that is not economically feasible. Second of all, realistically, we can't compete. We have thousands of open positions in state government. Why is that? We can't compete with a growing and burgeoning economy in Mississippi. They can get a better job."

Hosemann's plan is to raise the salary of the lowest-paid state employees, making entry-level positions more attractive to job seekers. The lieutenant governor was quick to point out the Legislature had not attempted a bottom-up pay raise in the past. But then, as Hosemann said at his press conference, "they've never had me for a lieutenant governor."

After a brief delay due to the volume of incoming freshman representatives, Speaker Gunn announced the full slate of House committee assignments. Unlike the Senate, Democratic leadership is notably missing, save Rep. Cedric Burnett, D-Tunica, who now chairs Youth and Family Affairs.

But a closer look reveals a number of interesting appointments. Rep. Kevin Horan, I-Grenada, chairs Corrections, replacing Bill Kinkade, R-Byhalia. Horan, who represents a majority-black district outside Greenwood, left the Democratic Party at the beginning of the session. The newly independent senator told Mississippi Today that he "voted pretty much down the middle," even before his departure from the Democrats.

The Corrections Committee has much to do this session. With the leadership roles of Horan in the House and Juan Barnett, D-Heidelberg, in the Senate, no Republican is leading Corrections in the Legislature. Previously, Reeves tapped Tommy Taylor, a Republican, as interim commissioner of the Mississippi Department of Corrections.

Recent Democratic defectors head both the House's powerful Judiciary committees. Judiciary A's new chairwoman is Rep. Angela Cockerham, I-Magnolia, re-elected as an Independent in last year's elections. Rep. Nick Bain, R-Corinth, heads Judiciary B. Bain switched from Republican to Democrat last March, saying in a statement that he desired to be more involved with the legislative process. The Judiciary committee chairs wield substantial power over criminal and civil-justice reforms: both Cockerham and Bain are moderates, compared to many House members.

Hundreds of bills now wait for the attention of their attendant committees in both chambers of the Legislature. Hosemann spoke glowingly of bicameral cooperation at his press avail—time will tell if that pattern holds.

Many of the currently filed bills are related to health care and Medicaid expansion specifically. The question of expansion is a dicey proposition for legislators, especially those in leadership roles.

Gov. Tate Reeves has repeatedly rejected expansion, calling any attempt to accept federal funds "Obamacare." But Hosemann displayed flexibility on the issue before and after the election.

House Bill 350, sponsored by Rep. Jarvis Dortch, D-Jackson, would expand Medicaid in the state, directing the governor to seek a waiver to expand the program's eligibility to Mississippians below 138% of the poverty line.

Senate Bill 2180, sponsored by Sen. Chad McMahan, R-Guntown, aims to expand Medicaid to include a broader range of disabled children not currently covered under the eligibility requirements. The bill follows a crackdown on a different kind of 'Medicaid gap': disabled children whose medical needs are extensive, but do not justify institutional care.

Parents of many of these children previously received coverage based on the federal "Katie Beckett waiver." The waiver extends Medicaid coverage to children who need one of three levels of institutional care—skilled nursing, hospital or intermediate care facility—regardless of their family income. But a change in the authorization process revoked the eligibility of more than 200 Mississippi children previously covered under the waiver, many permanently.

The bill is only intended as a partial fix, instituting an income cap on eligibility the senator from Guntown says is out of his hands. The cap is fixed at 300% of the federal poverty level—roughly $78,000 for a family of four.

"This 300% cap is a federal regulation. If I remove it, no one will get the waiver. None of them," McMahan explained to the Jackson Free Press.

The health-care bills filed so far show differing approaches to expanding Medicaid coverage, with some legislators seeking broad support for the program and its beneficiaries, while others are content with a more targeted approach.