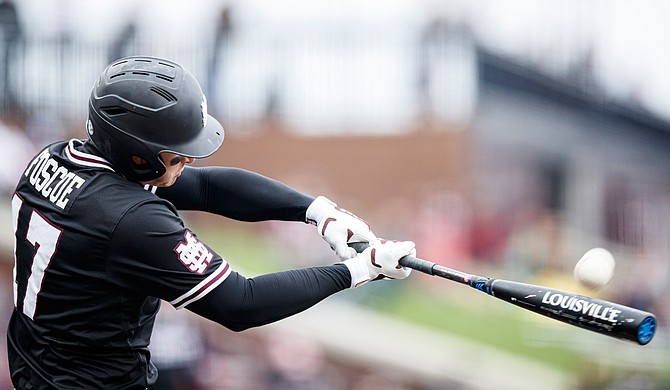 In the first round, the Texas Rangers made Mississippi State University second baseman Justin Foscue the 14th pick overall. Foscue is the 15th MSU player to be drafted in the first round of the MLB Draft. Photo courtesy Austin Perryman/MSU Athletics

As of now, Major League Baseball is not following the same road as the National Basketball Association or the National Hockey League. While the NBA and the NHL are working on coming back from the coronavirus-related shutdowns, the MLB appears to have chosen to not hold its 2020 season.

So far the owners and the players have failed to reach agreement on pay and how many games should be played. The two sides did agree to hold the 2020 MLB Draft but it only lasted five rounds instead of the normal 40.

In the first round, the Texas Rangers made Mississippi State University second baseman Justin Foscue the 14th pick overall. Foscue is the 15th MSU player to be drafted in the first round of the MLB Draft. He is the fifth highest player drafted behind Will Clark, B.J. Wallace, Paul Maholm and Hunter Renfroe.

Everything changed for the Huntsville, Ala., native for his junior season. Already a solid player in the field, his bat was the weak spot of his game. In 2019, Foscue raised his average 90 points to .331 with 91 hits, 66 runs, 60 RBI, 22 doubles and 14 home runs. The infielder played and started 67 games.

Foscue started out strong this season before COVID-19 ended the college baseball season. The junior played in and started all 16 games MSU played. He hit .321 with 17 hits, 16 RBI, 10 runs, four doubles and two home runs.

The good start to the season certainly helped the Rangers decide that Foscue was not a one hit wonder and that he would keep developing. Foscue was joined in the first round by shortstop Jordan Westburg, who was the final pick of the first round. It is the second time MSU has enjoyed seeing two players go in the first round, with Clark and Rafael Palmeiro accomplishing the feat in the 1985 MLB Draft.

Foscue is the highest drafted second baseman in school history but there is no telling when he will get a chance to play baseball again. Certainly no games are getting played until the owners and players figure things out and it looks like the 2020 minor league season won’t take place at all.

With luck, baseball will come back soon and that will be a good thing for Foscue and baseball fans.