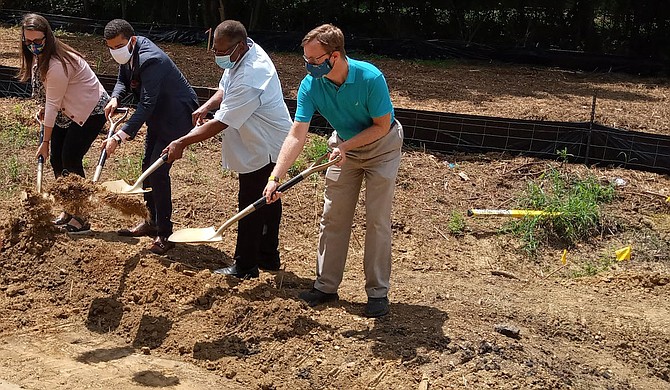 The paving of Lynch Street between Robinson Road and U.S. Highway 80 also includes a half-mile, 10-foot-wide multi-use path between Yarbro Street and West Highland Drive along an abandoned railroad. Lumumba said the path is part of his mission to help improve the health of the citizens of Jackson.

"This is an opportunity not only to address the critical infrastructure needs of our residence as it pertains to their quality of life, but we are also trying to check off many boxes as it relates to our strategic plan,” he said. "One of the central goals of our strategic plan is to have healthy citizens. So (we will not only) repair the infrastructure, the road, but also create a multi-use path."

The $2.2-million project, funded in part by the Federal Highway Administration and the Mississippi Department of Transportation, is scheduled for completion in four to five months and will have an impact on the city’s economy.

"Any time you have a project that not only repairs infrastructure but provides a better quality of life with a multi-use path, that not only provides healthier citizens but (also) leverages an opportunity for economic development and property values to go up," the mayor said. "What we are doing as a city is no longer chasing projects, we are chasing a collective vision. Every decision that we make feeds into prior decisions that we have invested in, and where we intend on going as a city."

Simmons said he is proud to work with the mayor and support his vision. "This is a great project, but it can never work without the collaboration of the federal transportation division, the City of Jackson and the (Mississippi) Department of Transportation, and when we come together, we will be able to do many, many things,” Simmons said. “This is one of many projects (we will do in conjunction) with the City of Jackson, going forward, because, again, our capital city and its infrastructure (are) very important."

Director of Planning and Development Jordan Hillman said the aim is to have a network of multi-use paths linking various parts of the city.

"Today is exciting for a number of reasons, but specifically because we are beginning to have a network of bike systems, a multi-modal trail, running trails, recreation, and transportation across the city," she said. "Just a couple of weeks ago, we kicked off the groundbreaking for the museum to market trail."

"The State Street project—the TIGER grant—includes a multi-modal trail. There are a couple of upcoming projects that are about to go into construction that also includes pieces of our transportation system," Hillman explained. "So this project may be a small piece of the puzzle but is part of a dream to take ourselves from where we are standing today in the (Lynch Street) project through the JSU campus all the way through downtown all the way into north Jackson and start building a network across the entire city."

"Over the next couple of months, you will see a kick-off of both a comprehensive plan of the City Jackson that is going to look at our land use, our transportation, our capital improvement," she added.