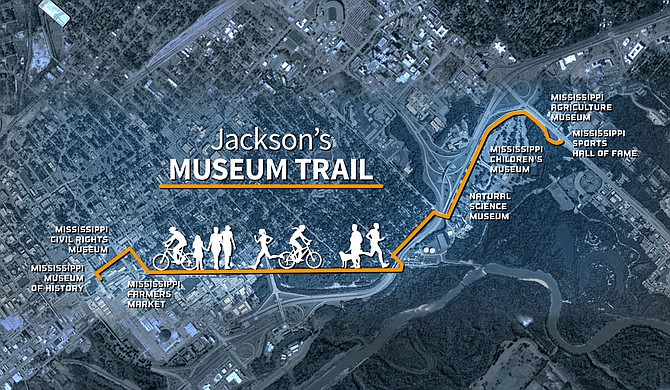 Dozens of people gathered Tuesday at the southern end of the Mississippi Farmers Market, near the intersection of North Jefferson Street and Mississippi Street, for the groundbreaking ceremony of the $1.6-million project. Neel-Schaffer Engineers designed the project, and Hemphill Construction has the contract to build it. 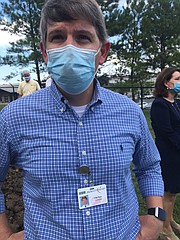 Dr. Clay Hays, a past chairman of the Greater Jackson Chamber Partnership, highlighted the economic and health benefits of the Jackson Museum Trail. Photo by Kayode Crown

"We anticipate that the project will be completed by the end of October," Hays, a cardiologist and vice president of the Jackson Heart Foundation, said. "It's something that is going to be a great boom for Jackson. Hundreds of people have participated in this project, people from the city, state, Mississippi Department of Transportation, Blue Cross (and) Blue Shield, the medical community, the schools."

"The Department of Transportation has been part of the project for 10 years to work to get resources, to work with the City of Jackson and all the other entities, both public and private, that have worked so hard to make this trail possible," Central District Transportation Commissioner Willie Simmons said at the ceremony. "It is going to be very, very beneficial to the city of Jackson and to the state. I am so pleased as commissioner to be a part of the ceremony and part of the support system to do this."

David Pharr, a Jackson lawyer and one of the volunteers on the project, recognized the role of the Chokwe A. Lumumba mayoral administration in overseeing the manifestation of a project that has been 10 years in the making. "They picked up a ball that was a legacy project and of three prior mayors and made it a priority to get it done," he said.

Pharr said the trail is a unique infrastructural project bringing together the private and the public sectors. "Very few transportation projects attract private capital that does not expect a return. Lots of people contributed private money to make this public trail a reality for the people of Jackson," he said.

Pharr said Blue Cross and Blue Shield Mississippi made a "six-figure contribution in 2011 that almost covered the entire amount of the City's matching obligation to get the federal grant."

"We appreciate them as an early investor," he said. "Then 10 years later, when the construction bill came in high, the Community Foundation for Mississippi stepped in with another six-figure contribution." Pharr is on the board of the Jackson-based foundation.

Pharr said the leadership of Clay Hays of the chamber made the project possible. "He brought in the leadership of the Jackson Heart Foundation, which functioned as our fiduciary, collecting all these donations," he said. "It's been a labor of love, but it has taken a long time."

The Federal Highway Administration and the Mississippi Department of Transportation are also providing funding to the project, which will involve converting an abandoned railway to a 10-feet-wide multi-use path from Spengler Street to Laurel Street and constructing a new pedestrian bridge over a creek.

Construction should start this month. A volunteer effort to raise money to add amenities to the trail is ongoing. More information is available on the website, www.jxntrailblazers.com.