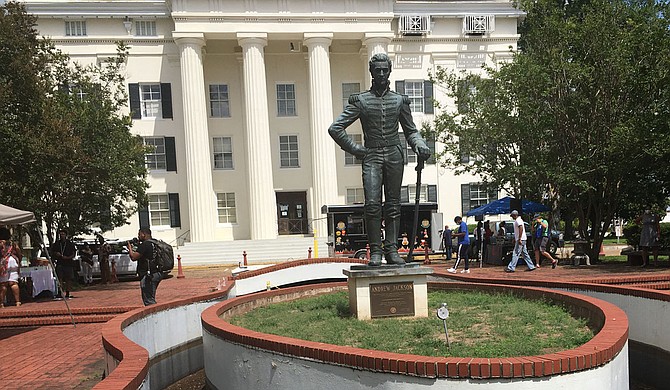 The days are numbered for the Andrew Jackson Statue in front of Jackson City Hall. Photo by Kayode Crown

In line with the current trend against glorifying slave owners and the slavery era with monuments and statues, Jackson City Council on Tuesday authorized Mayor Chokwe A. Lumumba to legally remove and relocate the statue of former President Andrew Jackson from the City Hall.

After Ward 3 Councilman Kenneth Stokes introduced the motion, later modified at the city council meeting to reflect the phrase "legally remove and relocate," Mayor Lumumba said he supports the move and wants a newly commissioned statue of Medgar Evers as the replacement. Evers, a civil rights hero, lived in Jackson before his assassination in 1963.

Lumumba said afterward in a statement said "We should not have to constantly encounter the likenesses of those who profited off of the blood, sweat and despair of our ancestors or see them immortalized as honorable."

"When I took office, I found out the name Jackson means 'God has shown favor.' So, we want to reclaim the name of our city for that meaning and divorce it from the legacy of a brutal owner of enslaved people who (were) instrumental in initiating the Trail of Tears against indigenous people," he said, in an apparent answer to the inevitable question of what to do with the name of the city after the statue of Jackson is removed. "Black people have reclaimed and repurposed names given to our families by slave owners for centuries. This is no different."

Jackson was the seventh president of the United States. The website for his plantation Hermitage in Davidson County, Tenn., near Nashville says he purchased his first enslaved person in 1794. “Over the next 66 years, the Jackson family would own more than 300 men, women and children. The maximum they ever owned at any one time is about 150,” the Hermitage site says. It also lists known enslaved people the Jackson family owned. Jackson is buried on the Hermitage grounds.

The councilman argued the need for the removal be with solemnity rather than glee, saying, "we will always be tied to this particular president because of this name."

"We now take advantage of the true promise of the United States to have folks that truly believe in equality, be the people we choose to glorify voluntarily, with monuments and honors," Priester said. "I think it is very important that we do it with a level of solemnity, and a level of following the law as required because we are a nation of laws and I want us to make it clear."

He supports the position of the mayor on the name of the city, saying, "there is a difference between getting rid of a name or getting rid of something, or moving something to a more appropriate place, given what we now know about history."

Priester highlighted the fact that Andrew Jackson was a "brutal plantation owner" while reiterating the need to talk very clearly about his history and not be ashamed of it as a city but "take the good with the bad."

Ward 6 Councilman Aaron Banks said that the moment should not be taken lightly because of what Andrew Jackson represents, not just as a former president but the one the city is named after.

"The records on how brutal he was as a plantation owner and as a slave master is not something noble that we need to continue to recognize,” he said. “We can find a more appropriate place for people that will like to recognize that."

At the Tuesday meeting, Banks replaced Ward 7 Councilwoman Virgi Lindsay as president of the council in a unanimous vote. Ward 5 Councilman Charles H. Tillman was unanimously elected as vice president.