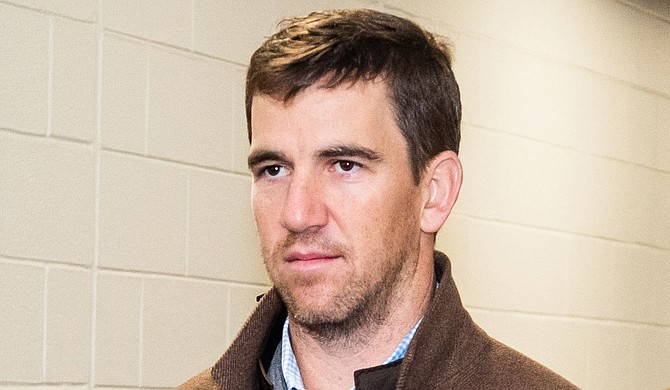 If the 2020 college football season is played, a third number will be retired. Former Rebel great Eli Manning follows in his father’s footsteps and is having his number retired at the school he started for from 2000 to 2003. Photo courtesy Alexander Jonesi

In football, just two numbers have been retired at the University of Mississippi. Those two distinguished individuals are Archie Manning’s number 18 and Chucky Mullens’ number 38.

If the 2020 college football season is played, a third number will be retired. Former Rebel great Eli Manning follows in his father’s footsteps and is having his number retired at the school he started for from 2000 to 2003.

While Peyton Manning chose to play at the University of Tennessee, Eli went to UM like his father Archie and made his own legacy. By the time his college career ended, he would earn a reputation as one of the best quarterbacks in school history.

Manning did not play much as a freshman in 2000, as he only saw action in six games. He completed 16 passes on 33 attempts for 170 yards with one interception and no touchdowns.

The following year, Manning played in all 11 games and became the leader of the offense. As a sophomore he threw for 2,948 yards while completing 259 of 408 attempts with 31 touchdowns to just nine interceptions.

In the 2002 season, Manning’s numbers dipped some but he was still impressive during his junior season. He completed 279 of his 481 attempts for 3,401 yards with 21 touchdowns and 15 interceptions.

The New Orleans, La., native enjoyed a spectacular senior season. He threw for 3,600 yards on 275 completions on his 441 attempts with 29 touchdowns and 10 interceptions.

Manning won the 2003 Maxwell Award, 2003 Johnny Unitas Golden Arm Award and was named 2003 SEC Offensive Player of the Year. He finished third in the Heisman Trophy voting as he set school records for career passing yards with 10,119, career competitions with 829, career passing attempts with 1,363 and career touchdowns with 81.

The San Diego Chargers selected Manning with the first overall pick in the first round of the 2004 NFL Draft. Being drafted number one made Eli the highest drafted player in school history just ahead of his father Archie who was drafted second overall by the New Orleans Saints in 1971.

Manning was traded to the New York Giants for Philip Rivers and would go on to play for New York for 16 seasons. It would end up being a memorable professional career for Manning.

He led the Giants to two unforgeable upsets of the New England Patriots in the Super Bowl XLII and Super Bowl XLVI. Manning threw a spectacular throw and catch to win both games against the Patriots and earn Super Bowl MVP honors for his play in both games.

It just was not on the field where Manning excelled but his deeds off the field earned him honors as well. He shared the 2016 Walter Payton Man of the Year award with Larry Fitzgearld and was named the 2020 winner of the Bart Starr Award.

Manning will have his number retired by University of Mississippi on Saturday, Sept. 19, against the University of Auburn. His number for the Giants will be retired during the 2020 season and he will join the team’s Ring of Honor as well.