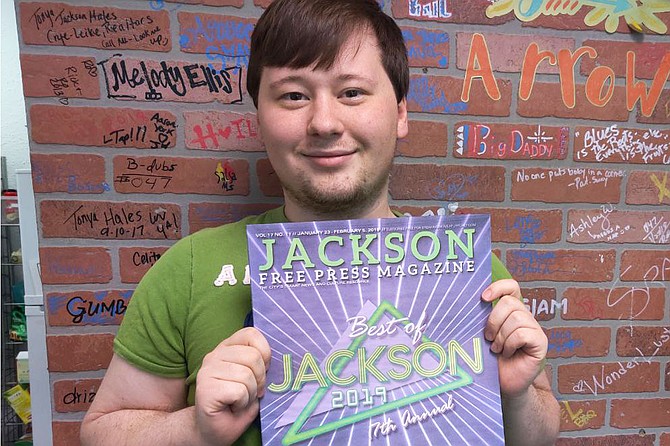 Deputy Editor Nate Schumann holds a copy of last year’s Best of Jackson issue, which was the first issue he helped put together when he first first joined the JFP as an assistant editor under then-managing editor Amber Helsel. Photo by Nick Judin 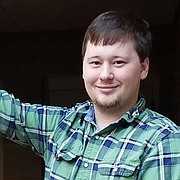 For someone whose least favorite subject in school was history, I have a habit of remembering exact dates for seemingly random events in my life. I remember the date of my third grade play, “Pecos Bill and Slue-Foot Sue,” Oct. 23, 2004. I played Pecos Bill and accidentally enwrapped myself in my own rope when I was attempting to lasso an imaginary horse. I remember the date I met my soon-to-be fiancée, March 3, 2018. She had begun working at the bingo hall I part-timed at, and I introduced myself quite formally, shaking her hand despite her hesitance to do so (hey, it worked out, no?).

One date that has been committed to my memory is Jan. 8, 2019, precisely a year ago from the date this editor's note is published. Have you any guesses as to what the significance of this date is? Well, I suppose the headline clued you in. Yes, today marks a year since I began working for the Jackson Free Press. Much has happened since I meekly walked through that door. Before I get into that, though, allow me to tell you my "JFP story." I touched upon how I started working at the JFP in my first editor's note, but there is more to the tale.

A series of happenstances led to my joining the JFP, and when I think about how everything had to occur exactly how they did, I am sometimes blown away by the power of cause-and-effect. Ultimately, I could argue that I owe my previous job for my current job. One of my jobs during college was calling for Plaza Bingo in Laurel, which The Good Samaritan Center, based here in Jackson, runs.

At Plaza, I forged a solid employer-employee relationship with our CEO, Kathy Clem. I left bingo to finish my final semester at USM, but my girlfriend Hannah remained at Plaza as she worked to pay for her own college education. Plaza hosts an annual Christmas party for its staff, so December 2018 I attended as Hannah's guest. While visiting my old coworkers, I caught up with Kathy, who asked my plans for the future since I had graduated earlier that month. I explained how I hoped to somehow find a path to be an editor, and she was excited for me.

I didn't think much more of the moment, but apparently Kathy kept me in mind, because when she saw an advertisement the JFP was circulating for a position as an editorial assistant, she screenshotted the ad and sent it to Hannah to share with me. To be honest, I had not applied to many places since graduating a couple weeks earlier, but I took a shot. I emailed then-managing editor Amber Helsel about my inquiry for the job, and I attached my resume and a cover letter. She quickly responded and asked if I could come up for an interview that Friday. I had previously interned for the University Press of Mississippi here in Jackson, so I had no qualms about returning for a new opportunity toward a path I longed to venture.

Dressed in dark gray slacks, a charcoal button-up and a pair of brown shoes that clashed with the rest of my attire, I made my way to Capital Towers and found the entrance to the JFP. I stood outside the door for a moment to ready myself when, to my right, Amber (whose appearance I did not know beforehand) seemingly materialized from nowhere (OK, so she had exited the restroom on our floor, which happened to be near where I was standing; point was, I was startled, ha). She asked if I was Nate, and after confirming my identity, she introduced herself and walked me inside. I like to think not having to ring the doorbell helped ease my nervousness, somehow.

Amber directed me to the "Zen Den," where I broke the ice by commenting on Micah's superhero T-shirt. I am a huge comic nerd, so I felt more at ease by chatting with Micah before he and Amber began the interview.

Before long, Donna joined the fray, shaking my hand and seating herself in an adjacent chair before immediately striking with "Do you procrastinate?" The directness of the question nearly threw me off, but I answered honestly. I said that most of us can fall into a place where we find ourselves procrastinating, but that we have to take steps to help motivate us and push us through those moments, like prioritizing and creating subgoals. Donna smiled and nodded her head, and I sighed in relief—because then I felt comfortable with all three of my interviewers. The interview progressed, and the more I spoke with my future coworkers, the more I felt like the JFP may be the place for me.

As I left to return to Laurel, Donna passed me as I awaited the elevator and said, "See you soon!" to which I immediately responded, "I hope!" That weekend, while playing card games with some friends, I checked my email and saw one from Amber saying I was hired and could start that week. Ecstatic, I leapt from my chair and nearly knocked my cards off the table.

Now, while I had been offered the position, at my starting point of 15 hours per week, earning enough money to pay for my own place here in Jackson would have been tough. Fortunately, Lady Luck was not through with me, yet. As it happened, one of my best friends from high school, Mason, had recently taken up a program through Nissan here in Jackson wherein he would work for them for a year, and then they would help pay for him to finish his schooling at Mississippi State University.

Mason graciously let me stay at his apartment for the six months remaining in his lease.

By the time I got my own place here in Jackson, I had worked my way up to being a full-time employee. Soon afterward, as anyone who read my previous editor's note may know, I took on Amber's responsibilities mid-September when she left journalism to work at Teen Health Mississippi a floor below us. Since adopting my current title of deputy editor, I have dramatically grown as an editor in the nearly four months I have been in this role.

Right now, I am preparing for our Best of Jackson issue, which was the first issue I had the chance to work on when I first arrived here, bringing me full-circle.

If I had not called bingo balls for a year, if I had not begun dating Hannah, if I had not gone to that Christmas party and told Kathy about my goals, if Kathy had not sent me the JFP ad, if Mason had not been in that program, if any of these key factors had occurred, I would not be where I am today. And that is why Jan. 8 is a date that will be burned in my memory for years to come. Happy JFP-iversary to me!