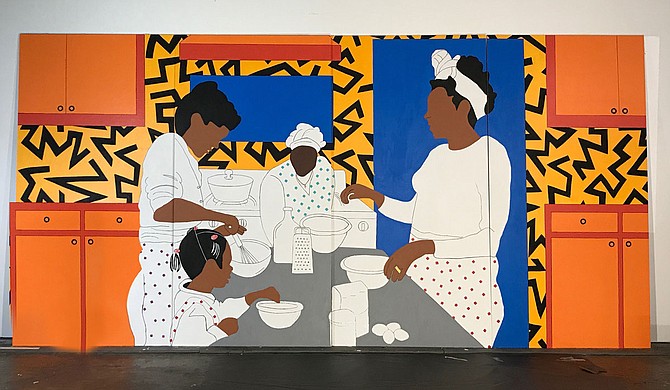 “Mama Rose Kitchen,” a painting by Mississippi artist Adrienne Dominick, is one of several public art projects included in the Fertile Ground Expo. Scheduled for April 9-11, the expo aims to inspire dialogue around hunger and food access issues in Jackson and beyond. Photo by Adrienne Dominick.

In a state where one in four children go to bed hungry at night, solutions to the food insecurity that plagues Jackson and other southern cities are the goal of a series of public art installations and workshops. The Fertile Ground Expo, scheduled for April 9-11, aims to address the history and future of food access in Mississippi and beyond.

"We know when you are hungry, you can't perform at your best," Mayor Chokwe A. Lumumba said at a press conference Tuesday in downtown Jackson. "Hunger is a problem that reaches beyond one's belly but affects every aspect of a person's way of life, which ultimately impacts how we function as a society."

Agriculture may be the state's leading industry, but Mississippi remains one of the hungriest in the country, Salam Rida pointed out at the presser. She is a program manager for the expo and an urban designer for the City of Jackson.

The U.S. Department of Agriculture defines food insecurity as "a household-level economic and social condition of limited or uncertain access to adequate food." In a recent report, the department revealed that more than 37 million Americans lived in food-insecure households in 2018.

Mississippi has consistently ranked as one of the most food-insecure states in the nation. Between 2010 and 2018, the state ranked No. 1 in food insecurity. It also has the highest poverty rate.

One in four Mississsippians—more than 600,000 people—experience food insecurity. The issue is especially profound for the state's elderly population and children. Half the state's senior population does not have enough to eat, and about 25% of Mississippi's children go to sleep hungry.

The Mississippi Food Network reports that in Hinds County alone, nearly 62,000 people have too little to eat—more than the entire food-insecure population of North Dakota.

Food insecurity has multiple adverse health impacts, ranging from developmental problems for young people to difficulties concentrating in school. Given that nutritious foods tend to be more expensive than unhealthy foods, families struggling with food access are more likely to eat foods that are detrimental to their overall physical health. Experts also link food insecurity to additional problems such as housing access and inadequate access to medical care.

The USDA notes that a number of state-level factors affect the degree to which a state experiences food insecurity. These include wages, housing costs and unemployment as well as "State-level policies that affect access to unemployment insurance, the State Earned Income Tax Credit, and nutrition assistance programs."

"The goal of the expo weekend is not only to be critical of our existing food system, but to provide new ideas and solutions for developing a more food-secure environment for southern cities," Rida said.

Scheduled to take place in various Jackson neighborhoods experiencing food-access issues, the Fertile Ground Expo will bring together prominent area and national chefs, nutritionists, farmers, activists, artists, and policy makers for workshops, dialogues and exhibits related to food. More than 30 events will tackle topics including the history of food insecurity, how to ferment food, urban farming, food waste, the food traditions of Farish Street, the impact of food insecurity on families and more.

The event is free.

The mayor thanked Bloomberg Philanthropy for its $1-million gift to organize the expo. In 2018, Jackson became one of five cities that the philanthropic organization selected from a pool of more than 200 applicants as part of its Public Art Challenge competition. At the Feb. 25 press conference, Lumumba added that Bloomberg Philanthropy work was independent of Mike Bloomberg's campaign for the presidency, while emphasizing the need to focus on the problem of hunger.

"We live in a world of abundance, but we operate from a place of scarcity. In our society, there is no room or justification for anyone to go hungry, for anyone not to have access to healthy food options," the mayor said at the press conference, adding that food is how Mississippians show love in their communities.

"Food is a reflection of how we demonstrate our appreciation for people. In spaces where people often have very little to offer, food is one of the few things that they can give you and provide you to demonstrate their love and appreciation for you. As a city, we should return the love," he said.

For more information about the Fertile Ground Expo, including a schedule of events, click here.