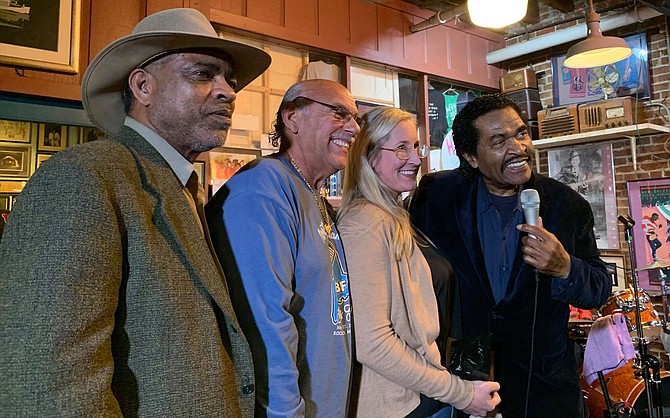 The blues genre will never die as long as enough people strive to preserve it as the years progress. Each year, The Blues Foundation, known as the International Blues Foundation, recognizes individuals, businesses, organizations, and festivals from across the globe that have invested years and effort into upholding the musical genre during its annual "Keeping the Blues Alive" Awards in Memphis. This year, Jackson's Hal & Mal's won one of only nine KBA awards when they were presented on Friday, Jan. 31.

"This is one of the biggest blues win that an entity can receive," Peggy Brown, a founding member of the Central Mississippi Blues Society, says, likening the award to a Grammy or Oscar but for the blues genre. "To be nominated is a big deal, but to win is just huge, because it covers the whole world. So to be honored with (a KBA award) is a big, big honor."

To become a nominee, a past KBA recipient or a Blues Society member must nominate the candidate. From there, a selection committee from The Blues Foundation reviews the nominee's work in blues until only a few winners are chosen. CMBS nominated Hal & Mal's for the best blues bar category for its long-standing history of booking blues-music artists, as well as allowing CMBS to host Blue Monday at the venue for nearly 14 years now.

Blue Monday begins with a "Front Porch" segment, where a solo or duo act performs at the end of the bar. Afterward, the Blue Monday band, which is a rotating roster of musicians who are also CMBS members, plays a set starting at 8:30 p.m. Visitors can fill out a sign-up sheet when they walk in to be allowed to join the stage and sing or play with the band, which many—both big names and talented locals—have done throughout the years since Blue Monday started.

"We could not have done Blue Monday for 14 years if it hadn't been for a location like Hal & Mal's," Brown says. She says she has been told the show is like "a mini festival every Monday."

Blue Monday has drawn in an international audience, having been mentioned in international blues magazines in the past. CMBS purposefully chose Monday to host its blues night to fill a need in the niche.

"What's significant about Monday is that there are a lot of people that travel through the state and don't have a place to go to listen to music on Monday, and that's one thing that the Blues Commission and the State of Mississippi had wanted in the past, for there to be a place for tourists to experience (blues) music every night of the week, and we have Monday nailed down."

Malcolm White, owner of Hal & Mal's, traveled to Memphis last week to accept the award from The Blues Foundation, which is celebrating its 40th year. On Monday, Feb. 3, Paul Benjamin, past chairman of the board for the organization, made his way to Jackson to re-present the award at Hal & Mal's during Blue Monday so that he could explain the significance of the honor to the event's regular patrons. Brandi Lee, White's niece who helps run Hal & Mal's, accepted the award.

Other prominent guests in the blues world who attended include Peter Astrup, a blues festival promoter from Denmark; Janet Webb, president of the Indianola Blues Society and member of the Mississippi Blues Foundation; Ron and Carol Marble, founding members of CMBS and owners of Mississippi Delta Blues Inc.; Bob Arentson from the Mississippi Blues Trail Commission; and Peggy Brown.

The Central Mississippi Blues Society hosts Blue Monday every Monday at Hal & Mal's (200 Commerce St.) starting at 7 p.m. The cover charge is $5. For more information, call 601-948-0888 or you can email  [email protected].