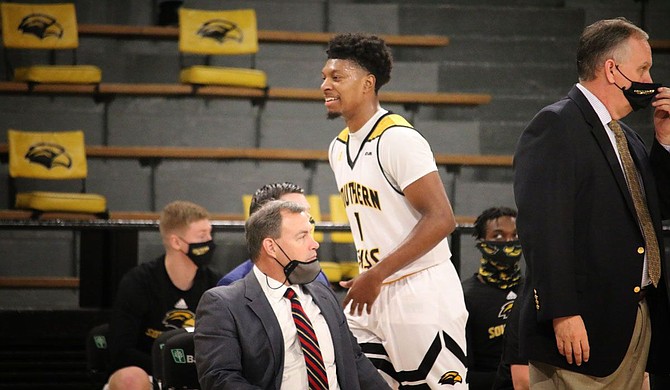 Ladavius Draine added his name to the University of Southern Mississippi record books when he scored 21 points against Loyola University New Orleans, becoming the 38th player in USM history to score 1,000 career points.

It was the first time that a Southern Miss player has reached 1,000 career points since Cortez Edwards accomplished the feat in 2019. Draine is just one point away from moving past Berlin Ladner for 37th place in school history in scoring.

Those 21 points are a season high for the senior, and he has scored double-digits in four of the seven games the Golden Eagles have played. He has helped USM go on a three game winning streak to get to 4-3 on the young season.

Draine only made three starts as a sophomore but was the first Golden Eagle to be named C-USA Co-Sixth Man of the Year. He broke Fisher’s school record for three-point shooting percentage as well.

The 2017-2018 season saw the freshman play in all 28 games for the Golden Eagles. Coming off the bench Draine played just 11.8 minutes per game as a freshman.

USM will look to win four straight as the team begins C-USA play against University of Texas El Paso on Friday, Jan. 1. The Golden Eagles will play the Miners in back-to-back games as both teams clash on Saturday, Jan. 2. Both will be home games for Southern Miss.

The Golden Eagles will face the University of Alabama Birmingham on the road in back-to-back games. UAB will host USM Friday, Jan. 8 and Saturday, Jan. 9 in the second C-USA series to start the season.