Burrow Yourself in ‘The Fox Cave Chronicles’ 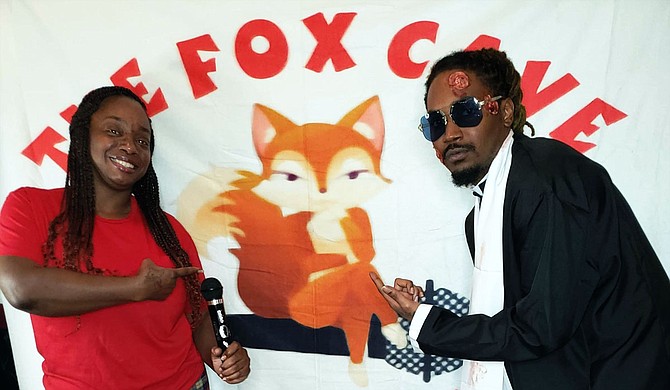 Felicia Hobson fixes herself a drink at the bar and takes a seat at a red table in the middle of the room. A candle burns, and '90s hits play softly in the background. A few friends gather on the couch to debate the best artists from their teenage years. Minutes later, Hobson picks up a microphone and introduces an upcoming local artist. Another episode of "The Fox Cave Chronicles" podcast has begun.

When the pandemic shut down businesses and offices in March, Hobson was in the middle of changing jobs. She found herself out of work and searching for something to do. One evening as she and a family member were sitting in her den listening to old music, Hobson realized that many of the songs they were enjoying were no longer in rotation.

"A lot of the music that I listen to is no longer around," Hobson says. "It's like the music is dying from the era that I love so much, which was the '90s."

The Jackson native decided to change that. "Foxy," as her friends call her, set up some recording equipment in her "woman cave" and started producing her podcast. Initially, Hobson used the show to catch up with older, popular musicians in the metro area.

"I didn't want the OGs to die out or become irrelevant, so the show was mainly about making Mississippi rappers relevant again," she says. "You know, the ones we don't hear about anymore."

The first show featured  Bigelow and aired via Facebook Live on July 20. When she saw that the episode was viewed more than 800 times, Hobson realized that she would need to expand the platform. She extended invitations to both older and up-and-coming Mississippi artists of all genres—as well as entrepreneurs, community members and Black business owners—to give them a chance to introduce themselves to the area.

"There are so many artists here (who have) so much talent here that we don't know about," Hobson says. "A lot of times they get overlooked because people are so prone to shine the spotlight on the ones that are already popular. That is why my platform is here."

The show gained so much interest that Hobson expanded from recording once a week to twice a week, then three times a week. Soon, she found herself recording nearly every day of the week.

Additionally, the podcast's popularity combined with safety concerns caused her to move the recordings from her home to a local nightclub with more open space.

In the future, Hobson imagines the podcast broadening its scope even further to include artists from other states. She also hopes to attract the attention of television networks and higher-profile celebrities.

The second season of "The Fox Cave Chronicles" will begin airing in February on the podcast's business page on Facebook. To view past episodes, join the podcast's public Facebook group. Follow the podcast on Instagram at @thefoxcavechronicles.