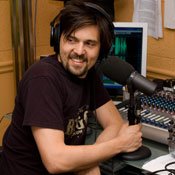 Daniel Guaqueta, tall and dark-headed with a half-grown mustache and goatee, is sitting in the control room at the WLEZ radio station and unwrapping a CD as quickly as he can. "I am so not ready for this show," he says.

"Well, that's the way it always goes," says a thin black man standing behind him.

"True." Guaqueta breaks open the CD case and puts the disc into a player.

The voice behind him belongs to Patrick Butler, 32, photographer and podcast administrator for "Mississippi Happening," a Jackson-based radio show dedicated to rock, pop, alternative, country and other genres of Mississippi music. Many episodes include interviews with Mississippi artists, and several of themincluding AJC, Signals, The Da Vincis and othershave performed live at the station. The show airs throughout the Jackson metro on 100.1 FM and online at http://www.wlezfm.com.

With podcasts available 30 minutes after air-time, a blog full of Butler's photos (http://mississippihappening.blogspot.com), an ever-expanding Facebook group and a new Twitter account, the voices behind the show want to reach as many listeners as possible. In the words of producer and host Guaqueta, 32, "We won't stop until everybody in Mississippi knows we exist. And we're working on nationwide, too."

Pretty ambitious for a show that started in February. Guaqueta wanted a new name for his show "Radio Fondren," to reflect a more statewide musical focus, so he talked to his friend Daniel Johnson, who had hosted a show called "Mississippi Happening" in 2006. Johnson gave Guaqueta the title and a catalogue of Mississippi music 120 CDs deep. The first episode of the new show aired Feb. 20.

Butlerwearing wire-framed glasses, a purple Jimi Hendrix T-shirt, jeans and a green fishing hat with a Batman symbol on the backis standing because he has given me his seat. It's just as well: Once the show starts, he'll be moving around the tiny, orange-walled room and brightening it with an occasional flash from his Pentax K100D. Every once in a while, he leans over to a microphone to add his two cents to whatever Guaqueta is saying.

Two other people populate this small space. One of them is Gretta Williams, a 28-year-old environmental scientist who is visiting tonight at Butler's invitation and now has her own mic.

The othera short, thin black man wearing a white T-shirt and dark jeansis Marques Phillips. I assume he is 7even:Thirty, the Jackson rapper scheduled to appear on tonight's show. But he doesn't quite mesh with the preconceived "rapper" archetype floating around in my head: He just told Williams and Butler that, although he likes the old "Star Wars" trilogy, the "Back to the Future" trilogy is better. He speaks quietly, and one of the two or three tattoos on his lower-right arm reads "Time Traveler" in curly black letters. Oh, and he's married.

"I have to get my wife to text me stuff to say," he says, looking at his cell phone. ӒCause I'll straight forget."

Ah, broken stereotypes. This show hasn't even started, and I love it already.

Four days before this taping, Guaqueta's sat in his living room with Butler and Amanda Rainey, co-producer and co-host of "Mississippi Happening." She is curvy and petite, with tight brown curls that frame her face. Guaqueta says, "the show wouldn't happen without Amanda," who books bands for live appearances and manages the "Mississippi Happening" blog.

When Rainey first visited the show, she was promoting her own band.

"I just came by to talk about The Bachelorettes, and I kept coming back," she says.

She plays drums in the band, a local throwback to '60s girl groups like The Shirelles. She'll miss this week's "Mississippi Happening" for band practiceexcept at 7:15 p.m., when she and the Bachelorettes will cram into the WLEZ control room and announce the weekly concert calendar. The calendar is always read by at least one Bachelorette, and the tradition will continue via phone during the group's July tour.

Guaqueta has lived in Jackson for four years and in Mississippi since first grade, when he moved to Hattiesburg from his father's home of Colombia. He says he "learned to speak proper English" by listening to the radio and mimicking NPR disc jockeys. He's been radio-obsessed ever since.

Like Rainey, Guaqueta plays drums in a Jackson-based rock band, Storage 24. He just finished directing the band's first music video for their song "No Surrender," and has produced four other videos for local artists. He's also a songwriter.

Butler, a freelance photographer and Jackson native, has been a regular contributor to the JFP and just started a photography blog, http://scenesaroundjackson.wordpress.com. (His latest two entries contain photos from the Storage 24 video shoot.)

These are busy people, and "nobody in 'Mississippi Happening' makes money," Guaqueta says. "Zero-point-zero zero zero."

So why devote time to it? Butler says he enjoys hanging out with his friends and taking photos, and Rainey says the show is a fun stress-reliever. Guaqueta says the most satisfying aspect of the show is giving exposure to the artists who perform on the air.

"Let's say (that) no one knows who they are," he says. "I give them the airwaves for an hour. That's all I care about.  You should see what the bands do when I tell them the hour is theirs: 'Really? How many songs can we play?' 'How many songs do you want to play?Ҕ

And when the band's live performance is as irresistible as AJC's was last week, Guaqueta will just tell them to keep playing. Nobody knows exactly what will happen on "Mississippi Happening."

On Thursday night, when it's time for the show to start, Daniel is as ready as he's going to be. He puts a huge pair of headphones over his ears and greets his listeners:

"Hellooo Jacksooonnn, this is Mississippi Happeniiing! We're here to bring you something fresh and easy."

bands and musicians can contact the show at [email protected]