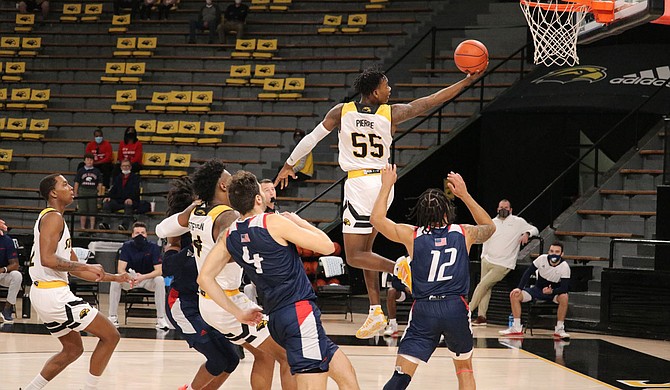 The University of Southern Mississippi is still trying to rebuild its program after NCAA sanctions a few seasons ago. The Golden Eagles might have found a major building block to help with the rebuild.

Freshman guard Jaron Pierre Jr. was named Conference USA Freshman of the Week for his play against Tulane University and the University of South Alabama. He averaged 18 points and eight rebounds against those two teams.

Pierre scored 11 points and added six rebounds against Tulane. His performance wasn’t enough as the Green Wave rolled to a 58-38 win over the Golden Eagles.

This is the first time a newcomer recorded a double-double since January of 2013 when Norville Carey accomplished the feat. The 25 points were the most points scored in a game since R. L. Horton did it in December of 2007.

It still wasn’t enough for Southern Miss to earn the win as USA held on for the 76-75 victory. The Golden Eagles are still learning to win in the second season under head coach Jay Ladner.

The shape of the USM men’s basketball program can be seen in Pierre earning C-USA Freshman of the Week honors. It is the first time a Golden Eagle was recognized by the conference as player of the week since Leonard Harper-Baker in January of 2018 and the first time a USM freshman has been named freshman of the week since D. J. Newbill in February of 2011.

In this young season, Pierre is leading the Golden Eagles in scoring with 11.5 points per game. He is third on the team in rebounds with 4.8 rebounds per game.

The Golden Eagles broke through on Tuesday, Dec. 15, against Lamar University. Pierre scored just two points as USM held on for the 66-63 victory.

Southern Miss hits the court again on Saturday, Dec. 19, against the University of Louisiana at Monroe. The Golden Eagles end the year on Monday, Dec. 28, against Loyola University out of New Orleans.