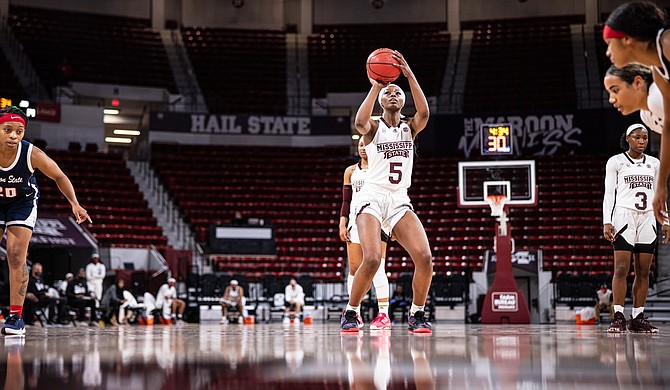 Mississippi State University’s women’s basketball team will have to prove it can play this season under adversity. The program is dealing with a head-coaching change and the current ongoing pandemic.

McCray-Penson will try to lead the Bulldogs through the 2020-2021 season as the coronavirus rages on around the country. The new coach will need her best players to play like superstars.

Sophomore forward Rickea Jackson entered this season being named First-Team All-SEC by both the coaches and media. Jackson was added to the 2021 Cheryl Miller Award list as she looks to build upon her gerat freshman season.

The Detroit, Mich., native finished her freshman season being named SEC All-Freshman Team and Second Team All-SEC. She was a three-time Freshman Player of the Week and winner of the Gillom Trophy, given to the best women’s basketball player at a four year college or university.

Jackson was named to the SEC All-Tournament Team and might have gained more honors if not for the virus shutting down the season. The NCAA Women’s Division I Tournament was cancelled before play started.

As a freshman, Jackson led the Bulldogs in scoring with 15.1 points per game. She finished third on the team in rebounding with 5.1 rebounds per game.

This season, Jackson has improved her scoring and resounding average or her freshman season. She is averaging 17.7 points and seven rebounds per game through the teams first three games.

Jackson doesn’t have to carry this MSU on her own. She will be helped by junior forward/center Jessika Carter, who was named Preseason Second-Team All-SEC.

Carter is second in scoring and third in rebounding for the Bulldogs this season. She is averaging 17.3 points per game and 5.7 rebounds per game through the teams first three games.

Several games this season have been cancelled for the Bulldogs. Until the vaccine for the coronavirus is widely available expect more games to be canceled or postponed for MSU.

MSU is currently 2-1 after being upset by the University of South Florida on the road. The Bulldogs won’t play another game until Monday, Dec. 14 against Troy University.

The Bulldogs will finish the non conference schedule with two final games. MSU will play Southern University on Friday, Dec. 18 and the University of Central Arkansas on Sunday, Dec. 20.

MSU begins SEC play on New Year’s Eve against the University of Georgia.