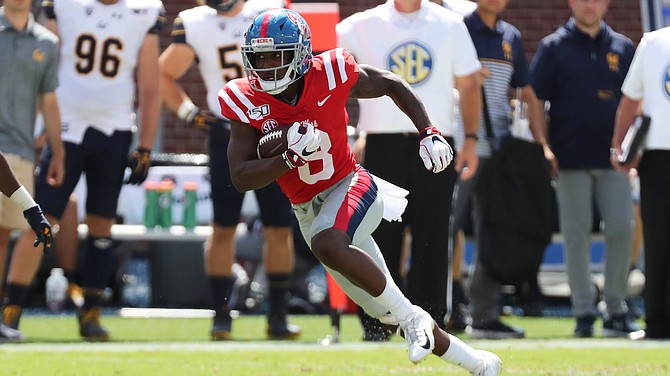 Featuring an ending that would go down in Egg Bowl lore for years to come, the 2019 Egg Bowl will always be remembered for University of Mississippi wide receiver Elijah Moore’s end zone celebration.

Moore scored for the Rebels to pull them to being down just 20-21 within the closing seconds. Then the wide receiver decided to lift his leg like a dog peeing in the back of the end zone.

The action drew a 15-yard penalty for unsportsmanlike celebration and Mississippi State University decided to use the penalty yards on the extra point.

Moore’s actions might have had a major effect on both schools. UM cut ties with then head coach Matt Luke, and it saved the job of MSU head coach Joe Moorehead until a meltdown leading up and into a bowl game.

That led to the Rebels hiring Lane Kiffin as head coach, and MSU hired Mike Leach as one end-zone action changed the course of both programs. Meanwhile, Moore headed into the 2020 Egg Bowl with plans of redemption.

Moore enjoyed a great game for the Rebels, as he caught 12 passes for 139 yards to lead the Rebels in receiving. He didn’t find the end zone but made big play after big play for UM when the team needed it most.

The Rebels grabbed the Golden Egg in a 31-24 victory over the Bulldogs. In a season full of ups and downs thanks to the coronavirus, UM gets bragging rights for the next year.

Moore is enjoying his best season as a Rebel in 2020. He has 86 receptions for 1,139 yards with eight touchdowns. All those are career highs for the junior wide receiver.

The progression of Moore as a receiver has been on display since his freshman season. In 2018, he played in every game and made four starts. He caught 36 passes for 398 yards and two touchdowns.

As a junior in 2019 he started all 12 games as he led the team in touchdowns, yards and receptions. Moore caught 67 passes for 850 yards and six touchdowns.

The 4-4 Rebels are waiting to play their final two games of 2020 after games against Louisiana State University and Texas A&M University were postponed.