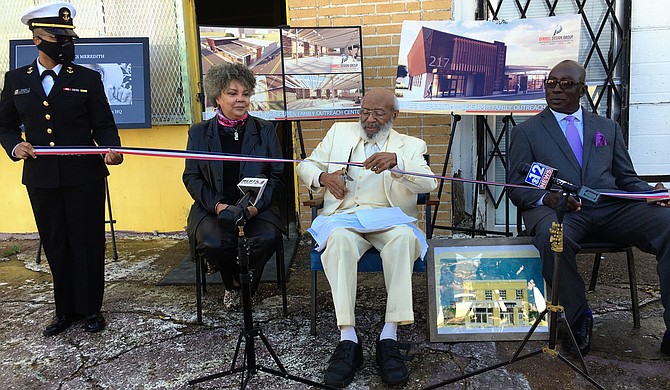 Civil-rights icon James Meredith, flanked by his wife, Judy Alsobrooks Meredith, and an associate, prepares to cut the ribbon for his proposed museum and Bible society headquarters Wednesday. Photo by Kayode Crown

James Meredith, the first Black person to graduate from the University of Mississippi, has set his eyes on another goal of building a personal museum in the next year, as well as starting a global Bible society.

The day before Thanksgiving, he brought together the media at the proposed site of the museum and the first Bible society mission headquarters at 217 West Griffith St. in downtown Jackson for the project's ribbon-cutting ceremony with the different design layouts on display. The museum will incorporate photographs, speeches, his 28 books and a research library.

"The purpose is to uplift the moral character and to rebuild our families by reading the Bible," 87-year-old Meredith said of the Bible society. "And teaching the 10 commandments and the teachings of Jesus Christ to children and the uninstructed."

The building is estimated to cost between $8 million and $10 million, which Meredith said he plans to raise partly by visiting Mississippi counties to fundraise.

"The James Meredith Bible Society is a 501c3 tax-free organization," he said. "All contribution donations, gifts, bequests, devices or transfers are tax-deductible."

He described the Bible society as a religious order whose members can come from around the world with online registration and no membership fee.

"It operates like a regular Protestant church," he said. "All reading groups with three or more members must elect officers, presidents, secretary, treasury membership fees. All gifts are free will."

"The Bible Society Association, in order to do the will of God according to the teachings of Jesus Christ, we are establishing the following organization," he added. "There are four levels, general, colonel, captain, lieutenant.

"I think anybody that systematically reads the Bible like we intend to get going will benefit and will become better people and will seek to go good,” Meredith said. “And that's what Jesus Christ is all about. That's what we want to accomplish."

While introducing Meredith at the event, his wife, Judy Alsobrooks Meredith, summarized his life's journey, starting with a notable event in his teens when he first experienced racism, which spurred him to take action later.

"James Meredith, when he was 15 years old (and) with his younger brother, was coming back from a bus trip from Detroit, Michigan. When they got to Memphis, Tennessee, the bus driver got up, and told James and his brother, Everett, to get on the back of the bus, and he drew a black curtain across them," she said.

"They had to stand all the way that 220 miles. James cried all the way to Jackson, but he was also scheming. Those tears turned into a plan that he would break the system of white supremacy."

Against stiff opposition from white supremacists, and with state and federal forces' assistance, he enrolled in the University of Mississippi in 1962.

"In 1965, there was a Voting Rights Act, which didn't mean much to Mississippi and white folks because people were still intimidated regarding voting in this state and around the country, actually, if you want to know the truth."

While Meredith cried from Memphis to Jackson at age 15, almost two decades later, he embarked on a walk linking the two cities to spur Black Mississippians to shake off the fear of violence and register to vote.

"He called it the Walk Against Fear," Judy Meredith said. "And what he was trying to do was to convince Black folks not to be afraid that any person ought to be able to walk any road without any fear of intimidation by white supremacists."

"On that second day and in Hernando, Mississippi, he was shot," she added. "That painful reminder, though, is something that he continues to carry."