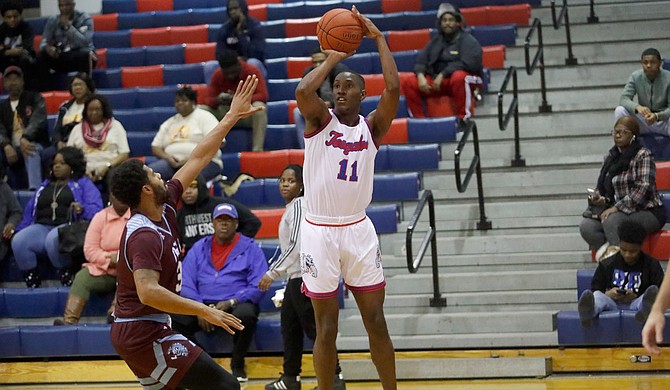 One Tougaloo player that was enjoying a great campaign was senior forward Ledarius Woods. He was named First-Team All-GCAC to end the regular season and named to the conference's All-Tournament team. Photo courtesy Tougaloo Athletics

One Tougaloo player that was enjoying a great campaign was senior forward Ledarius Woods. He was named First-Team All-GCAC to end the regular season and named to the conference's All-Tournament team.

Woods scored 8.2 points and grabbed 3.1 rebounds as he played in 28 games with four starts during his junior year. He led the team in scoring with 15.4 points and in rebounding with seven rebounds in the 2019-2020 season.

The Tunica, Miss., naive was a finalist for the Howell Award given to the best men’s basketball player in the state of Mississippi. Woods’ next chance to impress would be in the national tournament.

The No. 12-ranked Bulldogs waited to see where they would end up in the NAIA national tournament. Then the coronavirus ended the 2019-2020 college basketball season.

An abrupt stop of the season robbed Woods of his chance to play in the national tournament, as it was cancelled. “It stole my chance to play for a national title,” Woods explained. What might have been more important was that it took away the chance for any professional scouts to watch him play.

As the coronavirus shut down the nation, Woods soon found it hard to find places to work out or a gym to work on his moves. “I spent my time running everyday and jogging and sometimes was lucky enough to get access to a gym to a quick workout on the court,” Woods said.

As the pandemic rages on, Woods is trying to get his name out to scouts and professional teams to play at the next level. It is still hard coming from a smaller school with travel restrictions and limits on crowds at events.

Wood wants potential teams he is still working on his game as COVID-19 continues to persist. “I am looking for any opportunity to play professionally,” he said. “That team will get a hard-working, team-first young man who is a winner.”

“A team will get strong leadership, my great shooting ability and a defense that is good enough to defend just every position on the floor,” Woods explained. He will try to jump start his professional career by playing with the Jackson Showboats this fall.