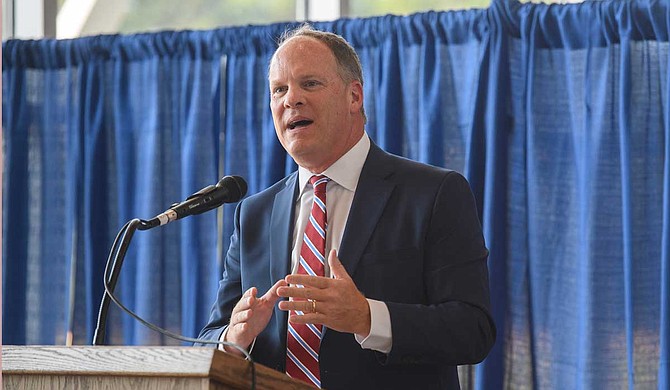 David Magee talks about the grass-roots outpouring of support for the UM William Magee Center for Wellness Education, which was named for his son. In 2013, William passed away from an accidental overdose after relapsing. Photo by Thomas Graning/Ole Miss Digital Imaging Services

As football season gets under way, David Magee remembers his son William Magee's love for the University of Mississippi's team. He remembered taking William to Egg Bowl against Mississippi State University when he was 8 or 9 years old and did not want to leave.

"It was misting rain, and it was cold, and I said let's go. He's like, 'No dad, we can't leave yet until it's over.' I just kind of wrapped him up and pulled him close and tried to keep him dry and warm," David Magee said.

"Then I thought, 'You're right, we shouldn't have left. This is good because we are a father and son together, and those moments are priceless.' As a parent, sometimes the simplest things mean so much," he added.

Magee said William was fluent in Spanish and was an all-state track star at his boys' college-preparatory school, McCallie School in Chattanooga, Tenn. William graduated from the school in 2008 and then moved back to Oxford, Miss., where he was born and raised until his family moved to Tennessee in 2003. At UM, William majored in International Studies and excelled in the Sally McDonnell Barksdale Honors College and the Croft Institute for International Studies.

"He just loved travel, and I think the global diversity of people and thought. He loved learning about different cultures," Magee said.

William lettered in track as a sprinter in college, participating in the Southeastern Conference championship in the 400 hurdles, his father said.

But William was also shy and suffered from anxiety. In high school, he started using alcohol to cope and make himself fit into the crowd, his father said said.

"He'd be more relaxed with alcohol, and then he'd walk into a party, and then suddenly he wasn't shy William. That was his Achilles heel. Unfortunately, it was more than he could manage," he said.

William graduated from UM in 2012, moved to Nashville, and sought help for his substance abuse through rehabilitation programs. He had plans to help others with substance-abuse issues, an idea he shared with his father.

"He told me he wanted to help people one day, but he said, 'I'm not strong enough now, but one day I want to,'" Magee remembered. "I said, 'That's so great. I feel the same way. You've managed to survive this, and I agree that would be great.'"

However, William would not live to see his dreams come to fruition. In 2013, a week after his conversation with his father, he relapsed and died of an accidental overdose. He was 23.

Magee said he and his wife, Kent Magee, learned the extent of William's substance abuse through journals they found after his passing. That lack of knowledge about his addiction is what pushed them to fulfill William's dream of helping people and on Sept. 6, 2019, the William Magee Center for Wellness Education opened on UM's campus.

"I think the reason we started this center is we realized as parents what we didn't know. Your children don't always want to tell you their problems. They try to hide, and they want their parents to not worry," he said. "Also, he (William) didn't know how to recognize the problem, which is really why we did the center. In a way, it may be able to help parents as well."

In 2016, when he moved back to Oxford for a job, Magee and his wife decided to make William's story public, he said. He wrote a column in The Oxford Eagle about his son and the story got a million hits online, he said.

"I put it all out there, (and) I was very revealing, but he told me he wanted to help people, so I thought let's see where this leads," Magee said of the column.

He said UMstudents, faculty, staff, administrators, alumni, family, friends and others whom William's story affected came together to help support the creation of the center. For three years, the Magees were active in raising funds for it, $2.7 million total, and telling their son's story. They had input in what the center would offer.

Assistant Director of Wellness Education Erin Murphy-Cromeans said some of the center's services include wellness consultations, and Rebel ADE. The Alcohol and Drug Education program centers around decision making, through experiential learning, street outreach and presentations for student groups on campus.

"We're targeting from a prevention and intervention standpoint. We want to make sure we're doing something before it becomes a larger issue," Murphy-Cromeans said.

The mission of the center is to help students make informed choices. "We want to be able to help answer those questions, whether it's stress-related or financial concerns, and it's spiraled out of control. Maybe they're having issues with their peers, and they need someone to sit and talk through that. Maybe they've gotten in trouble, and they're utilizing that program as a sanction," Murphy-Cromeans said.

'Joy Again After Losing a Child'

David Magee said he has already seen the impact the center is having on individuals.

"Over these three years, before the center was even open, and because it was gaining some publicity, we would already hear from both parents and students. Not just Ole Miss students, but area high school students and parents ... who were maybe dealing with some issues or had some questions like, 'I wonder if I have an issue?'" he said.

"We've already been able to help and have seen benefit and direct impact on lives. If not changing lives. I have to tell you the reward of that is so deeply gratifying, I couldn't put words to it," Magee said.

He said the center has taught him that he can find joy again after losing a child. "We, as a couple, lost a child, and we find great joy again because we understand that his life can help others. We've developed so many wonderful relationships with people," Magee said.

Magee has probably worked with about 1,000 UM students throughout the years of getting the center together, and those relationships have been amazing, he said.

He hopes the University of Mississippi will be a leader and beacon of light to help spread the message of the importance of wellness education, Magee said. "I just feel so good knowing that whenever my time is to go, there's something that stands long beyond us even. That will be able to help people long into the future."

The William Magee Center for Education Wellness is located inside the University of Mississippi's South Campus Recreation Center. The center is open Monday through Friday from 8 a.m. to 4:30 p.m.