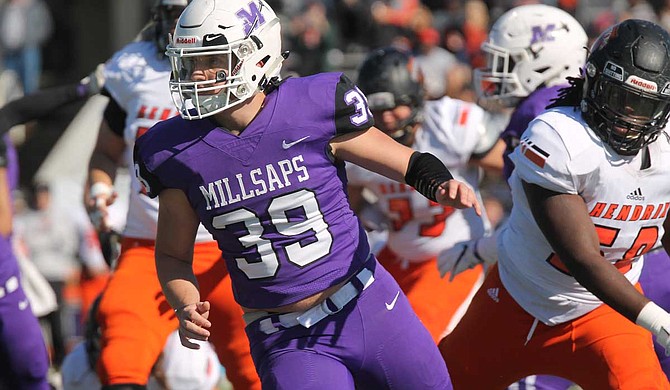 Each year, college football teams around the state enter the new season needing to fill holes that players created when they departed from the previous year's roster. In some cases, players graduate; in others, they exhaust their eligibility.

Millsaps College is one of the programs looking to fill a hole in its defense. The Majors must replace linebacker Chandler Coleman, who led the team in tackles, solo tackles and tackles for a loss, and tied for the lead in sacks.

Fellow linebacker Reid Evans could be the player who steps in and replaces some of the production Coleman provided last season. Evans enters his final year in position to be one of the leaders on defense.

Evans finished second on the team last season with 57 total tackles and tied for second in total tackles with 38. His nine tackles for a loss was good enough for third place on the team. He added two sacks, and one forced fumble and fumble recovery.

The Spring, Texas, native attended Klein High School and became a member of the Majors in 2016, While in high school, Evans earned All-District Honorable Mention as a junior and All-District Second Team as a senior. He was named Most Outstanding Linebacker and earned two letters. He also earned three letters with the wrestling team, winning the district championship title in the 182-pound weight class.

As a Millsaps freshman in the 2016 season, Evans played in all 10 games. He finished third on the team with 44 tackles, and his five tackles for a loss was good enough for fifth on the team.

The 2017 season was another strong showing for the linebacker. He posted 59 total tackles, leading the team in that statistic to lead the team in that year. His nine tackles for a loss put him in second place, and he added three pass break-ups and a sack. His play in the 2017 season earned him his first All-SAA Honorable Mention honors. A durable player, he played in all 10 games for the Majors that year.

While playing in all 10 games in the 2018 season, Evans earned All-Southern Athletic Association Honorable Mention honors. He was 16th in the SAA in total tackles, 11th in solo tackles, ninth in tackles for a loss and 26th in sacks.

Millsaps returns several players who, like Evans, could make an impact on defense this season. The Majors also return five of their eight leading tacklers from the previous season.

Junior defensive back Christian Roberts returns after finishing with 42 tackles for fifth place last season. Junior defensive lineman Liam Vincifora tied for first and fourth in the SAA with 6.5 sacks last season and eighth in tackles with 35.

Millsaps begins the season with the 10th match up in series history against Belhaven University. The Blazers lead the series 5-4 but the Majors won last year's contest 18-3. The Riverside Rumble is Thursday, Sept. 5, with kickoff set for 7 p.m.