Residents Champion Multimodality at 'Slow Roll with the Mayor!' 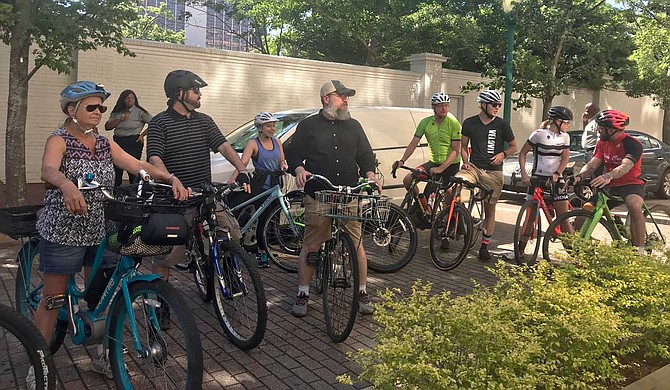 Jackson residents wait for Mayor Chokwe A. Lumumba to kick off the first "Slow Roll," a bike ride with the mayor through downtown, outside the Congress Street parklet on May 23. Photo by Aliyah Veal.

Jackson residents waited outside the parklet on Congress Street for the mayor to kick off his first "Slow Roll with the Mayor!" event. Some riders were decked out in biking gear while others were dressed more casually in jeans and T-shirts. Participant Roderick Brown, 47, was in the former group, strapped up in a helmet, and elbow and knee pads while straddling his mountain bike.

"I just wanted to participate in the mayor's ride. I thought it would be a good thing to do," he told the Jackson Free Press.

Mayor Chokwe A. Lumumba's Slow Roll allowed residents to ride their bikes with him through downtown. At Tuesday's press conference, he said the event supported his vision for Jackson to become multimodal, meaning the City would create multiple modes of transportation for residents. Jackson's current main modes of transportation are cars and JATRAN, the bus system.

Brown said he has ridden his bike off and on for six to seven years. Although he normally drives a car, he supports Jackson becoming a multimodal city.

"I think they need to make (the city) more bike friendly—more lanes and signs and remind motorists to be kind to bikers," he said.

The City of Jackson has placed bike racks and bike-repair stations in front of businesses downtown. At a press conference on May 21, Mukesh Kumar, director of planning and development for the City of Jackson, said as time goes on, the City will implement more bike infrastructure.

"Hopefully, we get to enjoy our beautiful city more the way we exist rather than entirely with a car," Kumar said.

The mayor said that multimodality may also help keep millennials from fleeing Mississippi. Data from the Census Bureau shows Mississippi has suffered an almost 4% loss in millennials since 2010.

After conversations with residents and a roundtable discussion with millennials, he has a better understanding of what they look for in quality of life, he said at the press conference.

Linden Potts, 35, a participant in "Slow Roll," said he likes to ride bikes and thought it was a great opportunity to ride with the mayor. He's been riding his bike for 20 years and participates in community rides with the Jackson Bicycle Advocates. As a millennial, he sees multiple benefits for the city from multimodality.

"Health. Affordable transportation," he said at Slow Roll. "A lot of urban, dense cities have a lot of multi-path trails, so I think biking would be very popular for the young crowd."

He said he wasn't aware of the bike racks and repair stations downtown, but he was excited to be able to use them.

"I think the more positive biking infrastructure we can have, the better," he said.

Betty Potts, 71, Linden's mother, also attended the "Slow Roll." She said she rides an e-bike, a bike with an electric motor, and wants bike lanes that connect to Ridgeland, so she can ride without the threat of getting run over.

"It'll keep the young people here if we have bicycling, that's for one thing, and it'll cut down on cars and traffic," she said of multimodality.

After the bike ride, participants could partake in watermelon, water and beer inside Basil's.

"We have to build the future of Jackson today. A city which offers these type of attributes that allows them to choose what mode of mobility they want to employ on any given day," the mayor said at Tuesday's press conference.