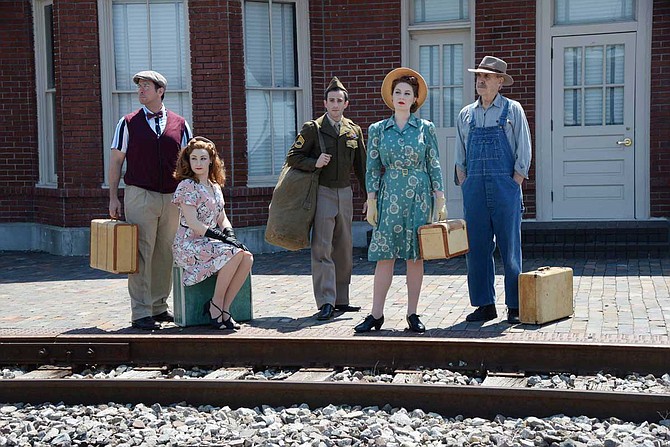 UPDATE: New Stage Theatre will hold over its current production of Bright Star. See additional dates at the end of the story.

William Helms stopped near a rail trestle in the St. Louis Iron Mountain & Southern Railroad on Aug. 14, 1902, to pick up some lumber for a barn. After a train sped by, he began to hear what at first he thought was field mice. But then he discovered something else: a telescope valise with a five-day-old infant inside. To this day, no one knows why someone had tossed him off a train.

"Bright Star" by Steve Martin and Edie Brickell aims to fill in those gaps of information—fictionally, of course, says New Stage Theatre Artistic Director Francine Thomas Reynolds. The musical, which takes place in the 1920s and 1940s, is loosely based on the legend of the "Iron Mountain Baby." New Stage is performing "Bright Star" from May 28-June 9.

"This play answers that question: 'Where did this baby come from?'" she says.

"Or offers a suggestion," adds Sari Koppel. She plays Alice Murphy, who goes on a journey to find her long lost son after meeting Billy Cane (played by Tyler Bellmon) a soldier who has returned from World War II.

The Americana-style musical centers around Murphy and her journey to find the son she lost. The musical switches between Murphy in her mid-30s in 1945 and 1946 as the editor at the Asheville Southern Journal, and her as a teenager in 1923 and 1924, when she has an unplanned pregnancy and loses the child when someone throws it off a train.

Because of the folk style of the musical, "Bright Star" is different than what people may expect from musical theater, Reynolds says.

"There are standard anthem-type songs, ballads, and then upbeat kind of songs that you would find in musicals. It's just that it's accompanied by fiddle, guitar, banjo, mandolin, that type of accompaniment, as opposed to trumpet, trombone, you know, brass and woodwinds," she says. "It's more string-based. Steve Martin didn't want it called a bluegrass musical, but there's a sense of bluegrass in the score."

One important part of "Bright Star" is the ensemble.

"In some instances, (it) becomes the Greek chorus of the show, not really commenting, but being part of the story by participating in most of the musical numbers," she says. "The music kind of soars. The vocals in the show are beautiful."

"Whether it's the '20s or '40s, they really set the opinions of those times, and things like that, which was quite incredible," she says.

Reynolds chose the show for this season because of its literary bent. In "Bright Star," Cane wants to be a writer, and Murphy is the editor for the Asheville Southern Journal.

"They mention things like Carl Sandburg, Tennessee Williams, Eudora Welty, Carson McCullers, F. Scott Fitzgerald, Ernest Hemingway," she says. "All these names are thrown out. Billy Cane's love interest manages a bookstore. ... Literature is a big part of this show."

It also fit with this season's theme, the "power of place."

At one point in the show, Koppel's character says, "It'd be easier to get Lincoln off the face of Mount Rushmore than to get home out of the heart of a southern writer."

"(That line) just spoke to Mississippi," Reynolds says. "Plus, (the play) really fits in because of what Sari was just saying about the music and folk music, it speaks to the people of the area. 'Bright Star' has a strong sense of place in its story. Place is really important, where they grew up, Zebulon, North Carolina, Raleigh, North Carolina, Asheville, North Carolina, that's part of the story."

"Bright Star" is all about story, Reynolds says.

"'A sweeping tale of pain and redemption,' as (the synopsis) says," Koppel says.

And though it has some dramatic elements to it, "Bright Star" is also a heartwarming comedy.

"A baby gets thrown off a train, and that's dramatic, but it's Steve Martin," Bellmon says. "There's humor and heart, and it's hilarious. It's not all dramatic."