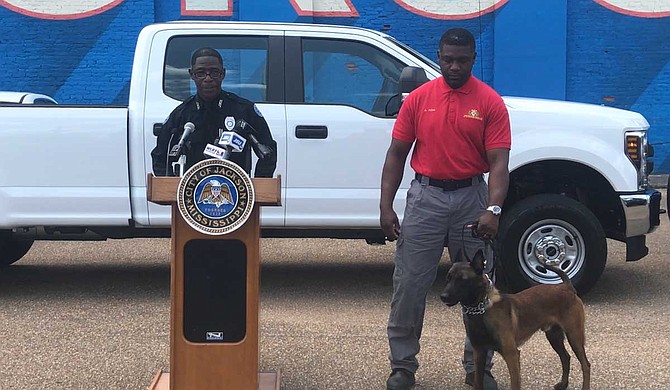 JACKSON—Loki, the 4-month-old new bomb-squad K-9 for the Jackson Police Department, wagged his tail as he stood beside JPD Officer Sam Brown and Aaron Allen, his handler, on the corner of State and Pearl streets.

The Jackson Police Department announced the introduction of a new bomb-squad truck, trailer, K-9, K-9 vehicle and other equipment at a May 22 press conference.

"Not only am I excited, but the bomb squad is as well," Brown, a public-information officer for the JPD, said. "[W]e have the equipment necessary to do this job, but any time you can get the latest equipment and the latest technology, it will make the job very much easier."

A City of Jackson press release said the JPD has one of four bomb squads in the state and covers a 90-mile radius. The unit's seven members are trained in explosives and explosives disposal—the process in which the bomb squad renders hazards and explosive devices safe.

"The bomb squad is dedicated to enhancing public safety at the scene of incidents involving explosives," Brown said.

He said the police department got the new equipment and technology through a grant from the U.S. Department of Homeland Security. "It goes without saying that these individuals are placed in harm's way to save lives, and they should have the very best training and equipment to accomplish that," Brown said of the bomb squad.

Those officers are on call 24 hours a day, including when a dignitary comes into town or to check out a venue for a major event in town. "They (can) go out, and they have the necessary tools and equipment needed to handle those threats. That's a big deal," he told the Jackson Free Press.

Due to security reasons, JPD could not get into specifics about the equipment in the trailer or its function. However, the press could take pictures of the outside of the trailer and the dog.

Loki, who is trained in bomb sniffing, is a good addition to the bomb squad because dogs have much better senses than humans do, Brown said. "They (are) going to sniff the buildings and find things that maybe the naked eye can't see," he said.

Brown said they are still keeping the old bomb truck and equipment. However, a recent increase in terrorist threats has pushed the police department to get the equipment and training that will match these threats, the press release says. The Jackson Free Press reached out to JPD to ask what those threats were but did not get a response by press time, and is now filing a public-records request for a list of equipment, cost and vendors.

"At any point in time that they don't have the necessary equipment that they have and can do the job properly, it can be a sad day for the city of Jackson or within a 90-mile radius," Brown said of the bomb squad.

On May 13, someone made a call to the bomb squad regarding a suspicious package outside a Walmart in south Jackson.

"It was rendered safe. (There) was no explosive in that package. It was business as usual," he told the Jackson Free Press.