UMMC Empowering Through Base Pair 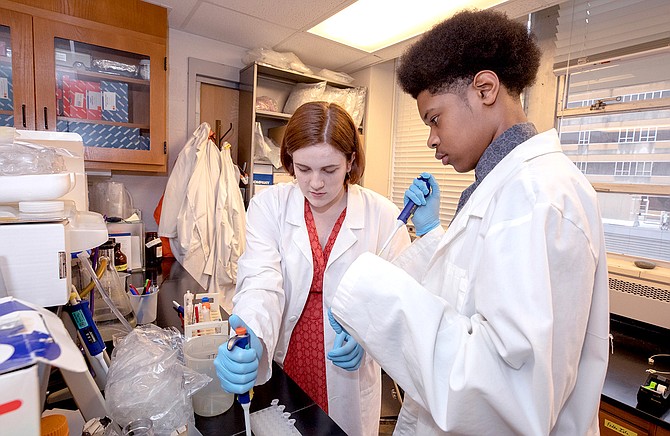 At least a dozen large corkboards on wheels, each containing diagrams, data, charts and more, fill a room in the University of Mississippi Medical Center. It's hard to hear over the noise of students presenting research projects on everything from potential cancer treatments to things that can restrict the growth of fetuses.

The students, all of whom are from Murrah High School, are part of Base Pair, a program that lets them work on research projects with doctors at UMMC.

The initiative, which has been around for 27 years, started with a simple question: "How can the sole academic medical center for this state help advance science education in the public schools, specifically Jackson Public Schools?" says Dr. Rob Rockhold, UMMC's deputy chief academic officer.

"From that question came the idea of working actively with students and with teachers in the public schools to show them what the opportunities were for advancement in education and careers in the health sciences," he says. Specifically, it is meant to improve students' knowledge of what research is when it comes to biomedicine and health care, and how to approach research at basic and clinical levels, he says.

For the program, doctors at UMMC identify students at Murrah High School who are interested in exploring science research and health care. The students eventually partner with someone at UMMC who is actively engaged in research.

They start the program as juniors, and Rockhold says they spend much of the first semester getting oriented to the campus and the academic research environment, and begin learning about the different projects they can work on.

In the next semester, they pair with the mentor and spend the last class period of each school day working in research teams in UMMC research laboratories, and continue that through the rest of their junior and senior years. Some students also get the opportunity to work full-time with the researchers during the summer.

The mentors do not pick the students, though; it's the other way around, Rockhold says. The students have to look up the research projects in UMMC's scientific literature database and find what interests them, and then they have to set up interviews with the researchers. Once the student and researcher comes to a mutual agreement. they're paired together.

Asiah Clay, a junior at Murrah who is mentoring with Dr. Parminder Vig, says she likes that the program lets her work hands-on in a lab.

"We don't really get that experience through the labs in school," Clay says. "Actually being inside a lab with real doctors is nice."

Matthew Hairston, a senior at Murrah, says being in the lab has been a good learning experience for him.

"Being able to grow as the year goes by, stuff that didn't make sense at the beginning, now it's just like, 'Oh, yeah, it's clear and concise now,'" he says. "It's nice being able to see that growth in learning."

The program has shown Hairston that if he goes into the medical field, he would enjoy jobs that allow him to do research, he says.

The name, which comes from the bases that pair in DNA molecules, refers to the mentorship between students and researchers, and also the proximity of UMMC and Murrah, which sit opposite each other on Woodrow Wilson Avenue.

"There is literally no way that we could continue ... no way we could give these students an intimate understanding of doing laboratory research if our two campuses were not so close together," he says.

The people who make the program work are the UMMC faculty members who devote their time to these students, Rockhold says.

"Everything we've achieved in Base Pair is the result of those faculty members here at the medical center who have given of themselves to advance the futures of these young students," he says.

The 220 students who have gone through the program or are in it have presented more than 450 different scientific projects, Rockhold says, usually in formal presentations like the annual meeting of the Mississippi Academy of Sciences, in scientific journals and manuscripts, and at national science meetings in some cases.

"Usually, you don't develop those kind of professional credentials until you are a graduate student in biomedical sciences," Rockhold says.

In addition to the students receiving mentorship, Base Pair also has programs for the professional development of teachers. Many of the ones who went through the training have gone on to do great things, he says. For example, Susan Bender, a teacher at Jim Hill High School, developed the Student-Oriented Academic Research, in which students develop research projects for science fairs, after she finished the training for Base Pair in 2001. As a result of Bender's work with SOAR, Jim Hill has won more than half the awards at the Mississippi Science and Engineering Fair Region II.

The success of the Base Pair students speaks volumes about the potential available in public schools, Rockhold says.

"If we don't harness that, we have lost a tremendous opportunity to advance the city, to advance the state," he says. "It would be just a terrible waste not to be able to take the fullest possible advantage of that resource."

For more information about Base Pair or the University of Mississippi Medical Center, visit umc.edu.