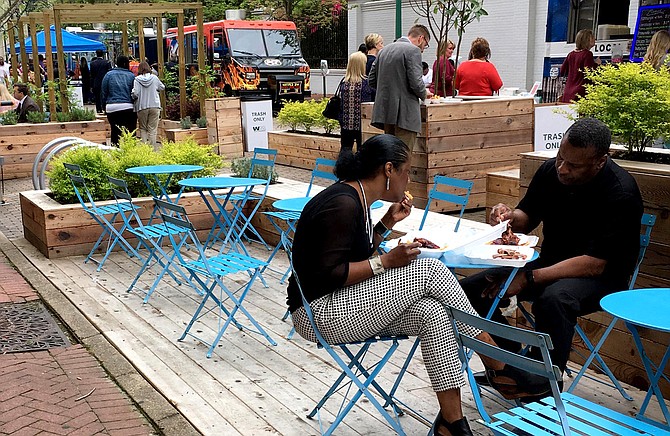 The next Downtown Food Friday Festival is June 7, tentatively at One Jackson Place at the corner of Amite and Lamar streets. Photo by Alivia Ashburn-Townsend

On the first and fourth Friday of each month, the area around Smith Park is abuzz with activity. Downtown workers gather from the different offices, and some people outside of the downtown area gather at the park for one thing: Downtown Foodie Friday Festival.

After Alivia Ashburn-Townsend, owner of Ariella's NY Delicatessen at Cultivation Food Hall, noticed a need to create a more lucrative environment for the food trucks in Jackson, she turned to the foodie community. She posted in the Eat MS Tri-County Foodies Facebook group in February, asking the members what Jacksonians could do to keep the food-truck community alive.

Sherry Wallace, a local event planner, commented, "Whatever you need me to help you do, let's do it."

Wallace, whose family owned The Western Weigh Station knew she wanted to do something for the city that would involve food trucks or  catering, she says.

"I wanted to do something to bring something entertaining back to Jackson," she says. "... I figured that would be a good way to do it."

The two connected with the City and hatched a plan to launch the festival, bringing in more revenue for both downtown and the food trucks, Ashburn-Townsend says.

"It was really, really good," she says. "Big turnout. All the food-truck vendors did really well. We had a couple of table vendors out there ... to introduce them to the community as well, and their businesses. I think that all the way around, everyone was just happy."

The next two were April 26 and May 3, and the next is June 7, tentatively at One Jackson Place at the corner of Amite and Lamar streets.

In creating the events, they wanted the focus to remain downtown because it's under-utilized, she says.

"When you go to capital cities in other states, the downtown area is being used significantly to bring in revenue for the city as far as attractions and festivals and businesses and just in general," she says.

"Ours is a ghost town. How do we change that? It's going to start with one event and one person at a time."

Wallace and Ashburn-Townsend's plans don't just stop at Downtown Foodie Friday, though. Ashburn-Townsend is currently working with the department of planning and development to do more downtown, especially after hours, and to create a more consistent income for  local business owners.

There is one specific big plan in the works, she says, but they can't say much about it just yet.

For more information about Downtown Foodie Festival Friday, find the event on Facebook.