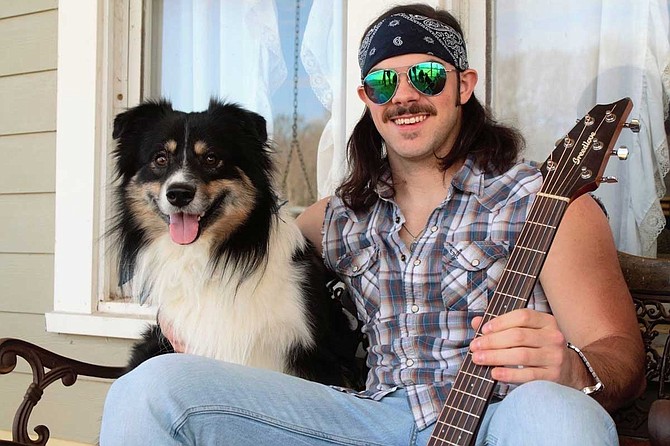 Local country artist Josh Journeay released his five-track EP, “Down the Road,” on Feb. 11, 2019. He recorded it at Blue Sky Studios in Jackson. Photo by Addi Powell

Just two days after local musician Josh Journeay, 26, released his first solo album "Down the Road," on Feb. 12, 2019, the five-track EP reached No. 7 on the iTunes country music charts.

"I was taken aback by that a little," Journeay says. "That doesn't happen to a lot of independent artists."

He was born in Greenville, Miss., and grew up in that city and the neighboring town of Leland, Miss.

While teaching himself to play guitar at the age of 12, Journeay gravitated toward country.

"I like the storytelling style of country, the way it can paint a picture with words. I feel closest to it," he says. He describes his own music as being primarily country with influences of rock-and-roll and blues.

Among the musicians Journeay admires are Travis Tritt, whom he calls a "songwriting genius," and Waylon Jennings, whom he respects for embodying outlaw country and always  "being himself."

Journeay was a senior in high school when he got his first paying gig at a bar in Hollandale, Miss. The business hired him to play one weekend per month, and from there, he got a taste for performance and began looking for more gigs, playing at small venues.

He graduated from Deer Creek High School in 2011 and then started at Delta State University, where he participated in the Delta Music Institute's entertainment industry studies program for a year and a half; however, in 2012, he decided college was not the best fit for him.

While living in Leland in 2014, Journeay fell back into performing paid gigs as a primary source of income, playing about four nights a week at various venues, often alongside his roommate and best friend Patrick Ballard.

In 2015, Journeay began working at WDMS, a radio station licensed in Greenville that focuses on country music. While there, he worked as a salesperson, selling air time to advertisers and making valuable connections, he says. The station currently still plays his music from time to time.

Journeay moved to Oxford, Miss., in 2016. In 2018, he moved to Brandon, Miss., and began performing in venues within the metropolitan area.

He recorded "Down the Road" at Blue Sky Studios, which Casey Combest owns. Journeay initially told only his friends and family about the EP. However, when he shared the news of his recent release on his professional page on Facebook, hundreds of people began to like, comment and share.

"All I had was a ton of people that support me and love me, and want to see a Mississippi boy go up and do big stuff," he says. "I was really humbled by it. I didn't realize just how many people were behind me."

The EP earned more recognition than he anticipated

"I'm still a little blind in the business, so when I saw (how well the EP was doing), I called Casey and asked if it was a big deal, and Casey was like, "Yes, that's a big deal,'" Journeay says.

The release party on Feb. 11 for "Down the Road" featured other local artists such as Patrick Ballard, Burnham Road, Chad Perry and Zach Bridges—all performing original music.

"I want to start more of an original music movement in Mississippi," Journeay says. "I wanted to prove to myself that you can go to a bar and play your own music, and people will listen and enjoy themselves as much as they would if you played covers. I was hoping that everyone else that performed that night gained enough confidence to continue that direction."

Journeay has also been a member of the band Burnham Road since June 2018 and is forming a duo with Ballard, who played a guitar riff in the song "The Price You Pay" from the EP. Together, they brand themselves the Ballard Journeay Show.

For more information, find Journeay on Facebook. The EP is available on iTunes.