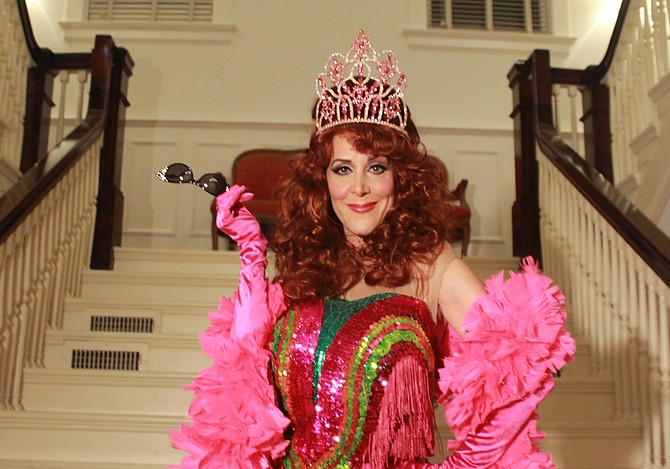 JACKSON — Years ago, among the parade floats and walking krewes in the then-named Mal’s St. Paddy’s Parade was a group full of people dressed head to toe in bright pink and green, complete with crowns, boas, capes and other accessories. Everyone knew them on sight: the Sweet Potato Queens.

Though the Queens have been absent during the parade’s recent years, they will return for this year’s Hal’s St. Paddy’s Parade & Festival—the same year, coincidentally, that New Stage Theatre will produce the first licensed version of “Sweet Potato Queens" the musical.

SPQ founder Jill Conner Browne, the woman whose life the musical is based on, calls it “divine cosmic convergence.”

Earlier this year, parade cofounder Malcolm White asked her if she could give he and the other organizers a date for when the Sweet Potato Queens would be part of the parade. She said this year. Then, as soon as the play was ready to be licensed, she immediately called New Stage Theatre Creative Director Francine Thomas Reynolds and asked if the company would consider the production for this season.

“It’s just been a divine cosmic convergence of things, that it worked out in their schedule,” Browne says.

She founded the Queens in the early ‘80s.

The Queens marched in the very first parade and continued until 2010, when Browne announced that SPQ had grown too large for the St. Paddy’s Parade. They created the Zippity Doo Dah Weekend, with its first iteration arising in Fondren in 2011. SPQ currently has 6,429 chapters registered across the world.

The idea for the musical planted itself in Browne’s head after author Willie Morris had a dream about it. After the Los Angeles Times ran a front-page story about the Queens in 2003, singer/songwriter Melissa Manchester had dinner with Sam Haskell, former executive vice president and worldwide head of television for the William Morris Agency, which was shooting the pilot for a TV show on Browne’s life.

He told Manchester about Browne and the pilot, and Manchester told him that she had read about the Queens in the LA Times. He gave her Browne’s book, “Sweet Potato Queens Book of Love.”

“As she read all of that, she started hearing music,” Browne says.

The two connected, and Manchester told her that she wanted to create a musical based on the Queens.

“I said, ‘Well, as it happens, that has always been my dream for it,’” Browne says.

Manchester wrote the music, Sharon Vaughn wrote the lyrics, and Rupert Holmes wrote the script. The play premiered at Houston’s Theatre Under The Stars’ TUTS Underground in March 2016.

“It’s a pretty star-studded cast of writers on this,” Browne says. “I had no idea how to go about getting a musical done. I just knew I wanted it. It came to me, and I’m thrilled.”

New Stage’s production runs of the musical March 13-24. Its plot centers around Browne's life and the creation of the Sweet Potato Queens.

“It’s the story of Jill’s life told as a musical, but it’s also a celebration of Jackson and the tradition of the Queens and the St. Paddy’s Day Parade, and the phenomenon that came out of it, this huge, huge movement of these ladies and men who dress up and parade their 6,400 chapters of the Queens all over the world,” says director Randy Redd. “They all gather, they all come here to Jackson, and as far as we know—this morning, Jill said she’s expecting millions—lots of queens to swarm Jackson for the parade.”

Redd, a Brookhaven native, has directed plays for New Stage such as “Smoke on the Mountain” during the 1993-1994 season, and “Million Dollar Quartet” in the 2016-2017 season. Though he is generally pretty serious about the theater and his work, he says, this play in particular is all about fun. He infused that attitude into choosing the cast and creative team.

“It’s all about fun, and it’s all about play,” he says. “... You’ve got to let go and have fun to work on the show, so I wanted people around me that were a lot of fun and that had wild, creative ideas.”

He says the show plays like “a big fever dream fantasy of Jill’s.”

In choosing someone who could play the Browne, Redd looked for someone who could fit her fantasy of who would play her in the movie of her life—“5-foot-2, long red hair, big breasts, small feet and she could sing,” Browne has said on multiple occasions, including in her speech during the 2014 TEDxJackson.

Redd chose Janine LaManna, an actress who has starred in Broadway plays such as “The Drowsy Chaperone” and “Seussical the Musical,” to play her in the production.

“I needed someone who not only who physically matched Jill’s fantasy, but also somebody who had the heart and spirit and the fun, and more of the fun; it’s what Janine LaManna is bringing to this part,” he says. “It’s so hilarious and yet so heartfelt; it’s so soulful what she’s doing on stage.”

Even if people think they know the Queens, Redd says, this play will show them more about Browne’s life and where the group really came from.

“Janine is doing that,” he says. “Janine is doing all the deep dive to get at the essence of Jill. I don’t think we could ever crack who Jill Conner Browne really is. I’m still just like staring at her whenever see her, I’m like, ‘Who are you? What are you made of? Are you really sweet potato on the inside? … She’s a real force, so charismatic, so dynamic, and to find someone to take that and then blow that up larger than life, how do you take that and use that in a musical? Janine is doing that. She is killing it. I’m really excited for audiences here to see that and to feel that.”

Because of the Queens’ origins, Redd says audiences in Jackson may enjoy the story more than they would in other places.

“We’ve worked really hard on the script to focus it on Jackson and to finetune all those details,” Redd says.

He has worked closely with Holmes on making changes to the script to make the musical more accurate to Jackson, such as the names of streets, hotels, restaurants and grocery stores, and the distance between here and Hattiesburg.

“He’s been very open to me saying, ‘Let’s make this more Jackson specific,’ so that this is truly a love letter to Jackson and the Queens’ birth in Mississippi,” Redd says. “That’s really important to get that right.”

While some Mississippi stories and plays may become a broad southern narrative, he says, the musical “Sweet Potato Queens” is different because it’s specific to Jackson and Mississippi.

“If you grew up here, you know how specific some of these references are, and what it means to be from Mississippi,” Redd says. “They’re a very specific, a very sweet challenge to define what that is, and this play does a really good job of capturing that.”