On Pothole Patrol in South Jackson 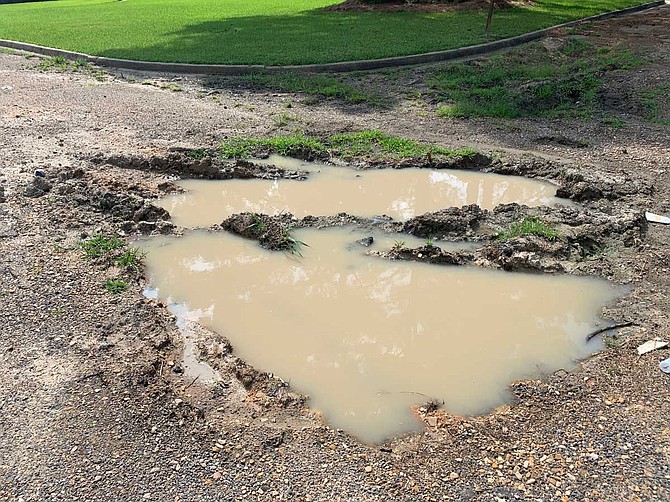 A large pothole sits in the middle of Amanda Lane in the Brookleigh Hills subdivision in South Jackson. Photo by Josh Wright

"This little cul-de-sac to your right down here. You see that hole? Yeah, that's in the street," he told the Jackson Free Press team that had joined him.

It was one of the worst of multiple untended potholes he showed us that the day. Two large indentations sat in the middle of the street, filled to the brim with muddy water, obscuring how deep they are.   "You wouldn't believe that. That had to develop from a heavy vehicle turning around," Martin said. "I say the (only) heavy vehicle that would be coming through here on a regular basis would be the  garbage truck."

The road hazard had no hazardous marker of any kind.

Brookleigh Hills is littered with potholes. Some were just starting to develop during that visit on June 19, while at least one other had grass growing out of it. Some  potholes were accented with orange cones as markers; others came with no warning.

A deep pothole, near Linglewood Drive, sat in the middle of the street, with the top of an orange cone peeking out of the hole's entrance.

"That one developed here recently in the last three or four months. We made a visit (to City Hall) and it wasn't solved then, and that's been less than a month ago," he said on the tour.

Martin has been living in  Brookleigh Hills, a neighborhood with many large brick homes, for 10 years and recently noticed an increase in potholes within the neighborhood. He and Emon Thompson, resident and senior  president of the Brookleigh Homeowners Association, have been going around the neighborhood and documenting their findings, he said.

"Our tax dollars should provide better roads for us than that. We've reported several times. Promises are made, and nothing happens. We have to follow up with them, and we still don't get any action," Martin said.

Thompson attended the June 11 Jackson City Council meeting, asking its members to create a better and more organized and responsive system of communication with the residents of Brookleigh about their hazardous streets.

"We're asking that the City communicate with us better. It's not nice for someone to tell us that they're going to do something, and we never hear anything about it again," Thompson told the council.

Martin said when he has approached the City of Jackson about pothole  complaints, the City routinely answers that they don't have the money to fix them. He also complains about the crews that get sent out to refill potholes.

"I try to report to them that the crews they send out are half  doing the work. If you gone pay someone for work, give them good instruction and follow up with what they are doing. Get us someone who can do it right."

'The Criticism Is Fair'

Hazardous road conditions, many of them routinely unmarked, have caused a number of issues in Jackson, including a Jackson Public School bus getting its tire stuck in a pothole in May. In 2017, Marie Jones lost control of her car and struck a silver pole after hitting a pothole  on Terry Road.

The lack of urgency about the dangers of street conditions has also led to tragedy. Last year, high school senior Frances Fortner died after her car flipped over an uncovered manhole on Ridgewood Road, after residents had filed multiple complaints about the uncovered manhole. The potholes even have a Twitter page, @jacksonpotholes, which posts photos of  potholes across the city.

Driving around the city shows that even the flagging of extremely potholes is inconsistent at best. Dangerous potholes on the streets around the  Belhaven neighborhood, for instance, had white paint—now fading—placed around them in recent months.

However, in many parts of the city, no such paint  is apparent.

The City of Jackson relies on citizen reporting through the 311 system, where residents can call and report their pothole problems. Potholes were the number-one reason residents called 311 last year. There were 1,835 complaints in 2017 and 2,028 complaints last year, the Tableau Public reported.

City engineer Charles Williams said resident's complaints are dispatched to maintenance crews, and the Department of Public Works tackles them accordingly. "The situation that we're in is that new ones form every day. Even when we think we have a legitimate number, it rises," he told the Jackson Free Press.

Williams said they do not physically go out and mark potholes: "What we'll do is once they're called, we'll work on it. On the work orders, there are designated addresses that the crew will be dispatched to."

He said he has heard criticism similar to Martin's regarding the pothole crews, but emphasizes that the City has workers who do some good pothole  work as well.

"The criticism is fair, but the reality of where we're at is the City has infrastructure issues from poor pavement, brittle water lines, brittle sewer collection lines," he said. "The bridges have met their life expectancy, we have drainage issues in the city."

"All of our infrastructure systems are competing against each other, so it makes it very difficult for us to focus specifically on one particular issue."

The Public Works department is also lacking in funds and workers with a crew of 20 people and a budget equaling half a million dollars. The funds are spent on asphalt, materials related to repair such as shovels, and maintenance required to keep the paving machine and two pothole trucks operational, Williams said.

He thinks the department needs a steadily funded  budget to maintain street maintenance.

"If you have continual funding to do that, you can continually have resurfacing programs in place that will be strictly applied towards your street inventory to  increase the life expectancy of pavement surface."

He said Public Works' main focus is repaving streets and trying to allocate funds toward resurfacing roads. His department just finished its 2018 resurfacing project, and it has presented some streets for consideration to the One Percent Commission, he said. The commission is a panel of 10 people appointed by the mayor and governor who provide guidance over the spending of money that is collected from the 1% sales tax.

"We're working with them to narrow down funding and a list of streets. Hopefully, we'll have some of that figured out at the next meeting in July," Williams said of the commission.

Mayor Chokwe A. Lumumba and City Council President Melvin Priester Jr. did not return calls about pothole repair and funding by press time.

While Jackson residents wait for their pothole problems to be solved, other cities across America are creating solutions to combat the problem. Chris  Conway, city engineer of Montgomery, Ala., said there were 17,000 potholes in Montgomery in 2018. Ninety-five percent of the potholes were filled due to the city's pothole patrol crew, he said.

"We have very few calls in complaining and reporting potholes," he told the Jackson Free Press. Montgomery is the capital city of Alabama with similar population size. Its median income is about $10,000 a year higher than Jackson's.

The pothole patrol there divides the city into three or four districts, and they ride the streets once a week. He has been working for the city for 15 years and said the pothole patrol was already established before he was the city engineer.

"We have over the years determined rather than wait for people to call and report them, we just send our guys out. If you find one, let's take care of it. We have found that to be a very effective way to handle (them)," Conway said.

One of the tools Montgomery used to its advantage was RoadBotics, a road-survey product that uses artificial intelligence to evaluate road conditions for local governments and organizations responsible for maintaining roads. RoadBotics assessed the road every 10 feet, took photos, and showed engineers areas where the pavement was in bad condition, he said.

"It was a great tool for us. We had about $15 million dollars of streets that were in disrepair, and we knew we didn't have enough money to rank those streets. RoadBotics provided that," he said.

At RoadBotics, certified technicians collect images using smartphones mounted to the windshield of a car. These photos are analyzed by the company's artificial intelligence that rates the images on a scale of one to five, with one being in good condition and five being roads that need immediate repair.

"With objective data, decision-makers can prioritize road maintenance activities with data instead of personal opinions," Nikhil Ranga, director of product and customer experience at RoadBotics, said.

William Martin of Brookleigh suggested that the City of Jackson needs a pothole crew like Montgomery that drives the streets themselves looking for hazards. "Set up a crew that's designed to do nothing but that and move from one area to the other until you can get major street resurfacing projects approved," he said.

What bothers Martin the most about Jackson is that public officials here would allow their residential areas such as Brookleigh Hills to wither away, while waiting for citizens to alert them. Jackson is supposed to be the capital city, but it doesn't look like it, he said.

"I'm frustrated and angry because nobody seems to care, and that's the bad part about it. They give you this story and that story, but that doesn't solve the problem," Martin said. "I hope this will spur somebody to do something positive to get the job done."