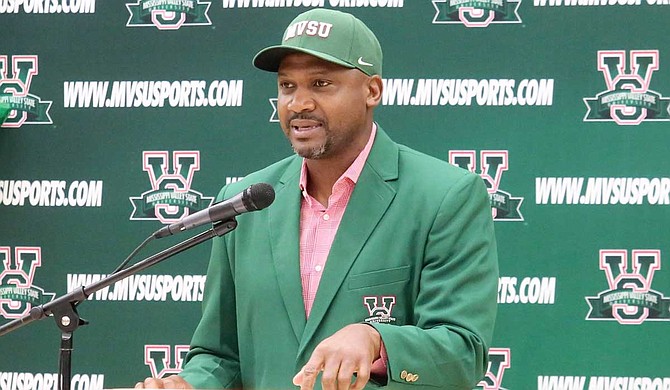 Mississippi Valley State University hopes a SWAC legend will bring life back to one of the conference's rich basketball programs. The Delta Devils hired former Jackson State University and NBA star Lindsey Hunter to restore the luster of the program.

Anyone familiar with the many great basketball players to come through the Jackson Public Schools system will remember Hunter. He played for Murrah High School at a time when the school was chasing titles and a top spot in the JPS basketball world.

At Jackson State, Hunter flourished, going from scoring 6.2 points per game to 20.9 points per game. JSU finished first in the SWAC in the 1990-1991 season but lost a play-in game for a spot to the NCAA Tournament against Coastal Carolina University.

Hunter continued to become a dangerous scorer as a junior, as he scored 24.8 points per game. The Tigers finished sixth in the conference and lost in the opening round of the SWAC Tournament.

As a senior during the 1992-1993 season, Hunter's scoring average improved again to 26.7, and SWAC recognized him as its Player of the Year. JSU finished first in the conference in the regular season, but Southern University beat the Tigers in the conference tournament.

Hunter still got his chance at the postseason with a trip to the NIT. There, he and JSU pulled off a memorable upset against the University of Connecticut in the first round. His college career came to a close in a loss against Murray State University.

He finished his career as the second-leading scorer in school history in the three years he played for JSU. For his college career he averaged 20.1 points, 3.7 assists, 3.2 rebounds and 2.2 steals per game.

The Detroit Pistons selected Hunter in the 1993 NBA Draft with the 10th overall pick. He played for the Pistons from 1993 to 2000, and in five of those seven seasons he averaged double digits in scoring. Hunter averaged 11 points per game during his time with Detroit. As a rookie he was named to the All-Rookie Second Team

He went to the Milwaukee Bucks for the 2000-2001 season, and averaged 10.1 points per game that year. It was the final season that Hunter scored double digits as an NBA player.

Another trade sent Hunter to the Los Angeles Lakers for the 2001-2002 season, and he won the first NBA championship, as he played a backup role. He averaged 5.8 points per game on a Lakers team that featured Kobe Bryant and Shaquille O'Neal.

Hunter was on the move again after winning a title. This time, the Lakers traded him to the Toronto Raptors for the 2002-2003 season. Then another trade sent back to where his career started: Detroit.

The guard spent 2003-2008 with the Pistons and won this second NBA title in 2004, when Detroit upset the Lakers. He and the Pistons reached the 2005 NBA Finals but lost to the San Antonio Spurs.

Hunter spent 2008 to 2010 playing a limited role with the Chicago Bulls as his career came to an end. He spent 17 years in the NBA and played in 937 games with an 8.5 points-per-game average during his career.

In 2012, Hunter was named assistant coach for player development for the Phoenix Suns. After a coaching change from the Suns, Hunter moved into interim coach for 41 games during the 2013 season.

Now Hunter returns home to take over a program that has not won with double-digit scoring in games since the 2011-2012 season. It will be up to Hunter, the 11th head coach in MVSU history, to restore the prestige that legendary coach Lafayette Stribling built.

The Delta Devils get a coach who knows the ins and outs of the conference as a player. The program and Hunter get the chance to lure players to MVSU by having a coach that played in the NBA and won championships from a SWAC program.

However, Hunter has one of the hardest jobs in Division I men's basketball. Mississippi Valley State has fewer resources than other schools in the SWAC. But, as recently as 2012 the program went to the NCAA Tournament and has a history of winning for Hunter to use for recruiting