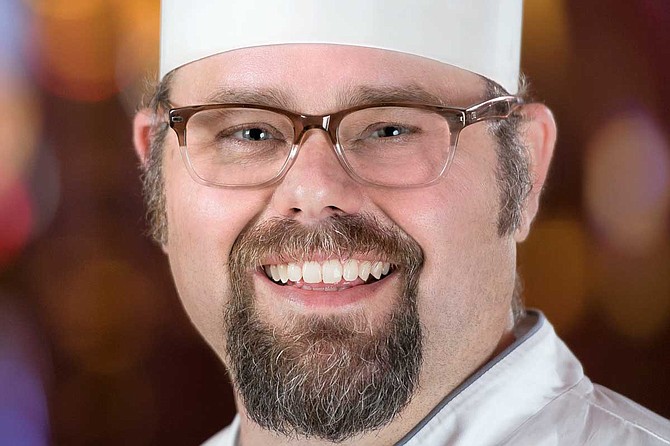 Kristian Wade, executive chef at Beau Rivage Resort & Casino in Biloxi, recently took home the “Best of the Fest” title at the ninth-annual Atlanta Food & Wine Festival, which took place from May 30 to June 2.

“This was the first time Beau Rivage has ever been involved in the festival, and we had no idea what to expect,” Wade says. “However, that made it even better for us, pulling off what we did. The festival had so many amazing chefs and sommeliers, and we got such a great response to our burger. We had lines backed up for 45 minutes to get it, and when we won Best of the Fest, it just blew me away.”

The Landmass Burger also has patties made from 80 percent beef and 20 percent mushrooms. Wade first created the burger in 2017 as part of the James Beard Blended Burger Project, in which The James Beard Foundation challenged chefs nationwide to create burger patties with a blend of beef and sustainable ingredients as part of an effort to reduce meat consumption in America.

Wade told the Jackson Free Press that the Landmass Burger takes its name from a weather report during Hurricane Isaac in 2012.

“When Hurricane (Isaac) was on its way to the coast, there was this ... weatherman on television who said it looked like the hurricane was going to hit ‘the landmass between Louisiana and Alabama,’ which you might know is Mississippi,” Wade says. “It became a big joke for us at Beau Rivage, so when I was trying to come up with a new ‘coastal’ burger, I decided to mix Louisiana and Alabama sauce together and called it ‘Landmass Sauce.’”

Wade says he has been fascinated with cooking ever since he was a child, as he would watch Julia Child and other famous chefs on television during summer vacation. He also says he enjoyed pretending to be a chef while making his own lunches. Wade says the greatest influence on his love of cooking, however, was his grandmother, Violet Wade.

“My grandmother lived on Beardslee Lake in Moss Point, and every time I visited her we would go and fish off a wharf where a bed of bream gathered, then make fried bream and grits for breakfast together,” Wade says. “She loved to spend her time cooking from the time she got up until it was time for bed, and I spent a lot of that time in the kitchen learning alongside her.”

Wade was born in Pascagoula and graduated from Pascagoula High School. He enrolled in the Atlanta Culinary Arts School in Atlanta in 1996 and received an associate’s degree in cooking in 1998. In 1999, he took a job as a line cook at Memphis Q, a former restaurant inside Beau Rivage. He became executive chef for the resort in 2015.

“When I came back to the Gulf Coast after years of being landlocked in Atlanta and first saw Beau Rivage while it was being built, I knew I wanted to work there,” Wade says. “It’s been a magical place to work over these past 20 years. I love driving down the I-110 highway into Biloxi and seeing this big, beautiful building come into view. I take pride in coming here every day to work with all the great people we have.”

Wade and his wife, Grace, have been married for four years and have a 16-month-old son named Jaxon.