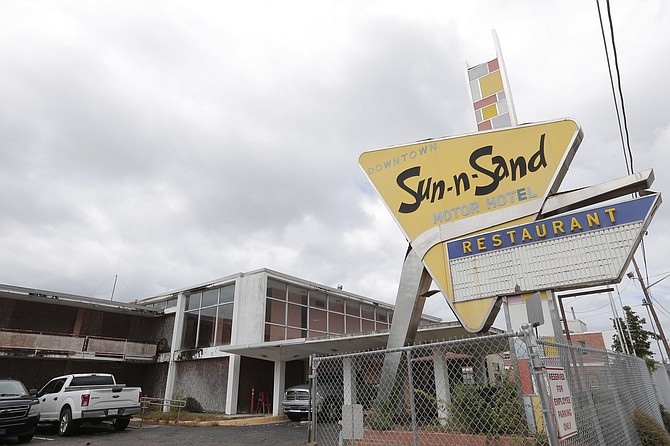 MDFA plans to raze the Sun-n-Sand and construct additional parking space for government workers, but will leave the sign up, MBJ reported. Photo by Imani Khayyam.

The motel, which the late businessman Dumas Milner opened in 1960, has been vacant since 2001. Milner also owned the King Edward Hotel in downtown Jackson, which closed in 1967 and re-opened in 2009. Lamar Properties purchased the Sun-n-Sand in 2005, and the state later bought it for $1,015,021.

Though the State will raze the Sun-n-Sand itself, the sign will still remain, MBJ said.

On Tuesday, July 9, the Metropolitan YMCAs of Mississippi made two indoor walking tracks free to use for senior citizens in light of a recent summer heat advisory. Now through September, seniors age 60 and over can use the indoor tracks at the Clinton and Flowood facilities for free every day between 1:30 p.m. and 4 p.m.

Metropolitan YMCAs is also partnering with senior fitness programs Silver Sneakers and Silver&Fit to offer members of either program free YMCA memberships at no additional cost.

"We want to make sure that seniors have a safe place to walk and be physically active when it's so hot outside," Jara Miller, chief executive officer of Metropolitan YMCAs of Mississippi, told the Jackson Free Press. "It's important for seniors to be careful during a heat advisory and be aware of the risk of heat stroke. Seniors' body temperatures may not adjust as well as younger people, and certain medications may also affect their body's ability to regulate temperature."

YMCA also released a list of summer heat safety tips for seniors. Here it is, verbatim:

Talk to your doctor—Know the medications that may put you at risk.

Stay in touch—Let friends and family know if you will be exercising or gardening outside and check in with each other at least twice a day.

Exercise smart—Avoid the heat of the day, direct sun and exercising alone.

Beau Rivage Resort & Casino (875 Beach Blvd., Biloxi) recently opened its new restaurant, TAP Book, Bar & Bistreaux, on Thursday, July 4. On Thursday, Aug. 1, the casino will hold a grand opening celebration to commemorate the first anniversary of the Mississippi Legislature legalizing sports betting in the state in 2018, as well as the 27th anniversary of the state's first casino bet on Aug. 1, 1992.

TAP is a 7,296-square-foot space that has more than 100 HD screens, including a 24-foot-wide-by-14-foot tall video wall made up of 70 screens that can operate individually or as one large display. The lounge also has 14 carrel desks with HD touch-screen monitors.

The smoke-free space also has two separate bars, three video poker machines and two VIP lounges. The main bar in the center has video poker machines, and both bars have free WiFi, power-charging stations, cocktail tables and armchairs. Each bar has 15 beers on tap, including seasonal and regional selections, and more than 30 craft bottled beers, cocktails and wines by the glass or bottle. TAP also serves adult milkshakes in flavors such as strawberry shortcake, mudslide and bourbon.