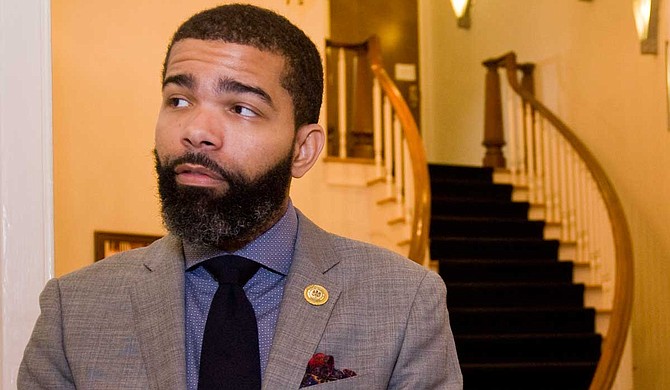 Mayor Chokwe A. Lumumba announces Lead Safe Housing Program, which will test homes for lead-based paint and remedy the hazard, at a press conference on June 17. Photo by Stephen Wilson.

Some older Jackson homes with lead-based paint could get a little safer, especially for children, under a new program City leaders announced Monday.

Residents with houses built before 1978 can have their homes tested for lead-based paint, which is known to cause serious health issues, and remedied if necessary under the new Lead Safe Housing Program. The United States Department of Housing and Urban Development donated $1.3 million to fund the program.

"This is not an issue for people unless they deal with it, but this can have the absolute worse consequences possible," Mayor Chokwe A. Lumumba said in a video of the press conference on Monday.

Mary Manogin, Lead Safe Housing Program manager, said the City of Jackson's Office of Housing and Community Development received funding for the program in October 2016. The program took a little more than a year to get off the ground because they had to learn what was needed so it could function properly, she said.

"Our inspectors were used to testing lead-based paint, but they weren't familiar with the HUD way," Manogin told the Jackson Free Press. "They have specific guidelines that we have to follow to conduct the testing."

She said the 900-page guideline manual helped them understand specific program procedures, including lead based paint inspections. The Office of Housing and Community Development used XRF scanners that inspectors applied on larger painting surfaces for a digital readings. They also established an in-house procedure to make sure inspectors complied with federal guidelines and give accurate reports and they also provided training for contractors to become lead abatement workers, she said.

"We've tested about 70 houses and, of those 70, a little over 30 of them have come back with lead hazards," Manogin said at the press conference. So it's really really important that we get the word out, so you can call us and contact us, so we can remediate your home from lead."

The program targets homes built before 1978, she said. That same year, the United States banned the use of lead-based paint after reports showed it was a health hazard.

"We realized Jackson has a very aged housing stock, and we have tons of children," she said.

Manogin said they are testing houses citywide, but at least half of the houses tested in the West Jackson area near the zoo have tested positive for lead-based paint. She said chipped or peeling paint are how inspectors determine if the paint is hazardous, but testing is key to achieving accuracy. Children are highly susceptible to that type of poisoning, particularly those under the age of 6, she said.

"A very interesting fact about lead-based paint is it's sweet. That's why we target households with children in the home at the age of 6 because they will chew on the paint. They will snack on it," she said.

Medical News Today reports the most common sources of lead poisoning are lead-based paint and water pipes in buildings, lead-based dust, and contaminated water, air and soil. Research shows children are more at risk because they can pick it up from the soil. They are also closer to ground level and may breathe dust that contains lead from the floor. Symptoms of poisoning include abdominal pain and vomiting, jaundice and black diarrhea.

Exposure can also contribute to illnesses such as asthma.

Mukesh Kumar, director of planning and development for the City of Jackson, said the program is open to homeowners and renters, and does not cost residents anything.

"If anything, at the very least, we can cover the paint and make sure that the paint is mediated enough, (and) at the same time, make referrals for children who may have been affected by this," Kumar said.

He said the city expects to have enough resources in the future to take care of other lead-based hazards throughout the city.

"We look forward to serving you and making sure your homes are entirely free from lead," Kumar said.

"We ask that you acknowledge the level of concern and that you communicate with the city, so that we can provide any measures to remediate the problem and make certain that we have healthy citizens," Lumumba said.

Residents who would like to get their homes tested can contact Mary Manogin, or they can contact Green Healthy Homes Initiative, a local nonprofit working with the City. People can mail applications for lead-based paint testing to the City of Jackson or Green Healthy Homes Initiative or find them on the City of Jackson's website. Manogin said completed applications should include supplemental documents such as a photo ID, income documents, and property and household information.

"We want to help and address the issue. We don't want people to be scared to go in their houses," Manogin said.

In a previous version of this story, we said Mary Manogin is the director of the Lead Safe Housing Program. She is actually the program manager. In a couple of instances, we also spelled her last name wrong. The Jackson Free Press apologizes for these errors.