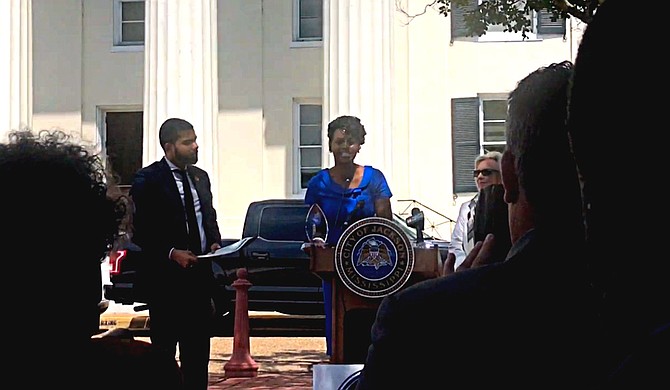 Cassandra Welchlin awarded the City of Jackson for its designation as an "equal pay city" on Mom's Equal Pay Day on June 10. Photo by Aliyah Veal.

Kristian Stamps, 13, wants to become a crime scene investigator when she grows up. Kristian, the daughter of Ward 4 Councilman De'Keither Stamps, said her parents taught her to work hard, study hard and prepare herself to be a productive adult. She believes it's time to take action in the fight against pay discrimination.

The City and the Mississippi Black Women's Roundtable recognized June 10 as Mom's Equal Payday, designating Jackson as an Equal Pay City. Jackson will become the first city in the state to lead efforts to secure equal pay protections for everyone across the state, the city said in a June 10 press release.

The day also marked the 56th anniversary of the Equal Pay Act of 1963, which a U.S. law mandating employers pay men and women equally for equal work in the same establishment.

The city council has passed an ordinance at the May 14 city council meeting that will prohibit the request of pay history upon being hired in the city. Mayor Chokwe A. Lumumba said the ordinance represents a moral document that speaks to the values of the city.

"I now challenge and encourage businesses who do work for the City of Jackson, that will enter contracts with the City of Jackson, to follow suit and adapt policies that will do the same," he said at the press conference. "As a man who has benefited from the genius, the talents and gifts of so many women, I feel that there is no other place that we can be at this time."

Cassandra Welchlin, director of the Mississippi Women's Economic Security Initiative, said her organization has been working hard for the past four years to get equal pay legislation passed in Mississippi. The state is the only one in the country without an equal pay law, she said.

"While we made progress towards closing the wage gap, women are still experiencing pay discrimination," she told the audience.

She said mothers in Mississippi who work full time year round typically get paid 64 cents for every dollar paid to a father. Black mothers get 50 cents for each dollar white, non-hispanic fathers get. She told the Jackson Free Press she hopes this day will help women in Mississippi develop a consciousness about wage discrimination.

"I think it will kind of awaken them so they can begin to pay attention to their own wages and how to be involved in changing the landscape and advocating for not only them, but also for the women in their communities," she said.

"This is election season. I want us all to pay close attention to who is running for office," Lindsay said. "Make this apart of the conversation, tell (the candidates) what we expect, and once they're elected, hold them accountable."

Cassandra Welchlin presented the mayor and council members with an award for their designation as an equal pay committed city.

"I challenge men to accept that we exist in a place of privilege and because of that privilege we have been afforded opportunities that equally talented and often more talented women have not been provided," Lumumba said. "I acknowledge, whether intentionally or not, that I have been a part of sexism and we have to recognize and denounce that."