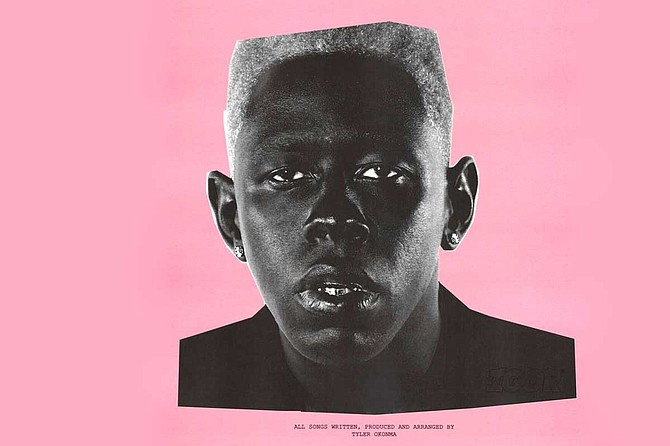 In 2017, Tyler, the Creator caused a stir following the release of his fourth studio album, "Flower Boy." His talk of kissing white boys on "Ain't Got Time" and thinking his attraction to men was a phase on "Garden Shed" gave listeners the impression that he was coming out as gay.

While some listeners were surprised, old tweets and photos surfaced that proved Tyler's many attempts at honesty regarding his sexuality. The emcee clears any lingering doubt with the release of his fifth studio album, "Igor," which debuted May 17. The album, which is No. 1 on the Billboard 200 charts, is an emotional rollercoaster detailing the ups and downs of a relationship with a man.

Although people may know Tyler for his eccentric lyrics and eye-popping visuals, one might forget that he is also a talented producer. He flexes much of that on this album, which he produced himself. On past projects, he has employed budding indie artists and notable starlets to sing the chorus or background vocals on his songs.

On "Igor," these singers take a backseat, as Tyler plays the role of lead singer. During his Apple Music concert for the album, he told the audience that he played Kendrick Lamar some tracks from the album.

Lamar described the songs as "feeling" and noted Tyler wasn't concerned with perfecting his vocals.

"That's why I don't always try to get people to sing. Sometimes, I'm just like f*ck it. I'll sing because someone else can't really sing my truth and what I'm trying to say," Tyler told the audience.

With an album as emotionally charged as "Igor," this extension lends itself to the production as well, which is melodic, using samples from the likes of Al Green and Ponderosa Twins Plus One. To keep along that same melodic theme, all his features, including rappers, sing.

"Igor" is an emotive album. It's a fusion of pop, blues, rock and hip-hop sounds in congruence with his various moods. When Tyler is angry, heavy bass or harsh, discordant rock underscores his sentiments. When he's happy, the production lends itself to funk and upbeat tempos.

The album moves in phases, following the trajectory of a relationship that starts out with promise, but ends in heartbreak. On "Earfquake," the album's single and the second track, Tyler compares the effect his lover has on him to an earthquake—unsettling and dangerous to his well-being. The bass-, hi-hat- and piano-infused track features the smooth vocals of Charlie Wilson and a nonsensical but melodic rap verse from Playboy Carti that is tolerable enough not to ruin the song.

The album transitions into a darker, tone on "New Magic Wand" as Tyler vents his frustration and anger at the crumbling state of his relationship. He feels like second choice as his lover's attention shifts toward a woman. "I need to get her out the picture/she's really f*ckin up my frame," he rap-sings over the bass-induced, synthesized production. Santigold's repeated "Don't leave" paired with Tyler's vision of what their relationship could be hints to his desperation.

This quickly turns to threats of violence in the song's final verse, referencing the song's opening line from comedian and writer Jerrod Carmichael: "Sometimes you gotta close a door to open a window." "A Boy is a Gun" begins another transition for Tyler as he realizes his lover doesn't have his best interest at heart. He puts his own spin on Ponderosa Twins Plus One's "Bound" with the addition of various gun sounds and harmonized vocals. His lover walks the line between safety and danger to Tyler and others, hence the gun metaphor. "Gone Gone/Thank You" is two songs in one that build and transition from acoustic pop to a spacey beat layered with kicks.

“Are We Still Friends?,” the album’s final track, samples Al Green’s “Dream” with its traditional blues sound. Electric riffs and drums build up as Tyler croons, almost painfully, on whether or not he and his ex can still be friends. Pharrell sings a small verse on the second chorus before Tyler takes it away, belting out a frustrated scream to finish.

“Igor” displays an intimacy unlike any of Tyler’s past albums as he displays a vulnerability that does away with all his jokes and playfulness. His ability to share his own pain through singing, similar to that of R&B artists, makes him a lot more relatable as everyone experiences heartbreak or will experience it at some point. It’s an easy album to follow with a variety of sounds that Tyler strings together with a love story.