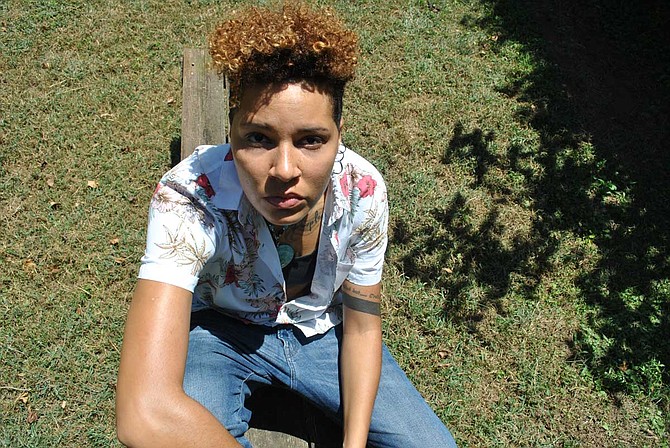 Rapper and activist Genesis Be launches Pledge To Vote campaign to empower women voters and to secure 3,000 new registrants for the 2019 Mississippi Gubernatorial Election. Photo by June Moon

Rapper and activist Genesis Be was sitting at least a dozen rows back from the stage on May 26 at the Mountainfilm Festival in Telluride, Colo., when Oprah Winfrey suddenly made a surprise appearance.

One hundred questions from the audience were posed on an app Strayed read from and by a stroke of good luck, Be's question was one of them. "Is there any hope that Mississippi can heal from our generational trauma?" Be asked the most famous native of Kosciusko, Miss.

"You can't move forward unless there is acknowledgement from the person who betrayed and hurt you. The healing begins when you recognize that that's what it is that needs to be healed," Winfrey replied. "Do I see that in the immediate future? No, I don't. And you don't either, that's why you asked. Right?"

"I want to believe and hold onto hope, but as you said, those in power have a huge issue of trying to acknowledge and meet us halfway," Be told her.

Be, who is 32, did not take Winfrey's answer negatively, though. To her, it meant leadership in Mississippi needs to change for healing to occur. That chance encounter with Winfrey set her immediately on a new course—to get more women in Mississippi registered to vote.

"It kind of just gave me that extra little push that I needed to launch this initiative even though I don't have the proper support or backing," Be later told the Jackson Free Press, noting that Strive Till I Rise is currently sponsored by Focus For Health & The Middle Project, which is based in New York.

"However, this particular initiative doesn't have a big budget or celebrity push behind it," she said.

Two days after her interaction with Winfrey, Be announced her new initiative, Pledge to Vote, in a Facebook video. The goal of the initiative is to get 3,000 more Mississippi women registered by June 30 to vote in the gubernatorial election this fall.

Be is using social media to help spread the pledge, a method that is cost effective and "starts with the people."

"We're bypassing the media that kind of have actively suppressed information from getting around. But it's a new day. Our generation, we're all about sharing positivity, inspiration and empowerment," Be said in an interview.

She said the goal of Pledge to Vote is to empower women in Mississippi to become more active in the political process and hopefully run for office.

"We are focused on empowering women because, although there are more women in Mississippi than men, Mississippi ranks nearly last in the nation when it comes to women represented in local and state office," Be said in the video.

Be, who travels back and forth between Atlanta and her native Biloxi, Miss., said she has seen little conversation in her home state surrounding voting or civil engagement unless it is negative.

"I was wondering how come I don't see anything in Mississippi about the governor's race. I wanted to do my small part to build conversation, excitement and knowledge around this election," Be said.

"Sometimes, I feel like people don't know we're having a race."

'So It Is Life or Death'

Be wants the younger generation to get out and vote because people who came before them risked their lives so that they could have that right. That included her own grandfather, Rev. Clyde Briggs, who helped black people in southwest Mississippi register to vote and get access to good schooling in the early 1960s, inciting the wrath of the Ku Klux Klan.

"So it is life or death—that's how serious voting is," she said. "It's the easiest and most basic form of community service, you getting out and making your voice heard."

Mississippi, of course, has a deep history of suppressing voting rights for black people and women of all races.

Due to the 15th amendment, white leaders in Mississippi couldn't outright ban black people from voting. Instead, they implemented poll taxes, literacy tests and the "grandfather clause," which allowed people to register if their grandfather was eligible to vote before the Civil War, to block African Americans from registering to vote.

When Congress voted in favor of ratifying the 19th Amendment almost 100 years ago to guarantee women the right to vote,  Mississippi's representatives in the U.S. Senate voted against it. Before the vote, U.S. Sen. Pat Harrison, a Democrat from Mississippi, even tried to have language inserted that would have limited voting rights to white women only. Mississippi did not ratify the 19th Amendment until 1984—the last state to do so.

Be speaks to young people in her family and in the community about this history and the need to vote. However, many are not old enough to vote. But she has seen support from black and Latino men, women and community leaders.

Lea Campbell, founder and president of the Mississippi Rising Coalition, saw Genesis Be's interview and performance with Rip Daniels in 2016, where Be put a noose around her neck and tore apart the Confederate flag in protest of the Mississippi flag and the anti-LGBT legislation that passed, House Bill 1523. Campbell called into the show and thanked Be for her courage, and they exchanged numbers.

"We connected immediately because we share the same all-consuming passion for changing the flag and dismantling racism and bigotry here in Mississippi," Campbell told the Jackson Free Press.

When the campaign launched, Campbell immediately shared it through social media and emails. She said Be has a unique voice and platform that allow her to connect with various communities.

"Genesis uses her artistic voice to connect and raise consciousness and awareness in multiple ways with multiple audiences— through her music and writing, her painting and visual arts and her ability to speak in front of audiences and a camera with a clarity of purpose," Campbell said.

Strive Till I Rise

Activism runs in Be's family. Her grandfather, Rev. Briggs, worked as an education reformist and voter-rights activist in the 1960s. Her father is a writer and an  activist. She started rapping while she was in junior high and used music as a tool to rap about what she saw in her community and her experience with Hurricane Katrina.

While studying at New York University in 2010, Be got the idea to combine entertainment with civil engagement to excite young people about voting and community action. She started her own organization, Strive Til I Rise, to speak to young Mississippians and help motivate them to "disregard the negativity and strive to rise above their situation."

In 2017, Be reached out to friends and organized a conversation surrounding the Confederate flag. She brought together those who found the flag to represent legacy and heritage and those who saw the flag as a symbol of racism and terrorism.

Louis McFall, a white man and a high school friend of Be, walked away from the conversation with increased awareness and ultimately, ended up taking down his flag.

Campbell said Be's campaign could be an effective way to address the lack of women representation in local and state office. "We are a state that has historically been resistant to enacting legal protections and policies that uplift women in the home and the workplace," she said.

The wage gap between men and women and the national wave of anti-abortion legislation this year are "anti-woman," Campbell said. Women can change such policies if they get to the polls and help elect women to the Legislature to have a voice in the policy-making process.

"We need to start talking with the women in our state about how they are disproportionately represented in the Legislature and how this is reflected in the policies passed," she said.

Campbell, for instance, plans to vote for Velesha P. Williams, a black woman, for her in the Democratic primary against State Attorney General Jim Hood.  'Give Women a Shot to Run'

Connie Moran, the former mayor of Ocean Springs on the Gulf Coast, found out about Be's campaign through the  Mississippi Federation of Democratic Women Facebook page. As a woman who has been in a position of power, she encourages more women to get involved.

"Well, it's very important (to have women in office) unless you want to have a group of lawmakers who don't seem to care about women's issues," Moran told the Jackson Free Press.

Moran said women should put the issues they value the most in the forefront and fight for them—or else run for office themselves.

"Just register to vote. That's a great start," she said. "Don't let anyone talk you out of it. I've known candidates who have lost by one vote and every vote counts."

Once the campaign ends, Be would like to see a larger conversation and more concern about the representation of women in politics in Mississippi, she said.

"I would like older women and younger women to be having this conversation about what it looks like for us to run for office, from our own community groups, where we are more active in city council and community decision," she said.

"Maybe it's time to give women a shot to run in Mississippi. Mississippi can only go up from here, we can't get any lower," Be told the Jackson Free Press.

This story has been updated to correct a misspelling. The "Strive Till I Rise" organization is spelled with two Ls in "Till," not one. We apologize for the error.