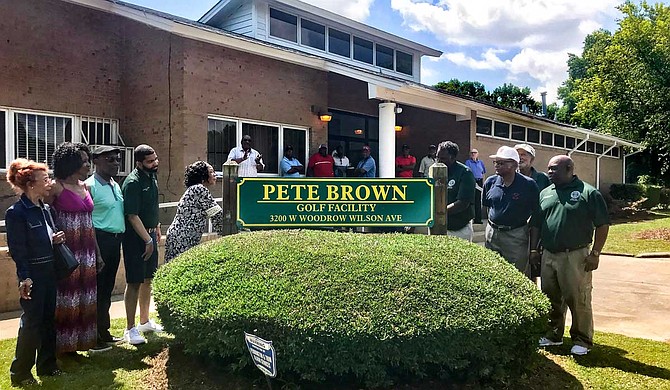 James Ridley, Pete Brown's friend, knew nothing about golf until he became an investment adviser. The first time he played was with his co-workers, who laughed at his poor performance. But then he met Pete Brown, a pro-golfer who took him under his wing and trained him.

"(At) the next outing, which was probably three or four weeks later, they weren't laughing anymore," Ridley told the audience at a ceremony to rename the Sonny Guy Golf Course to honor Brown instead of the white golf pro who has long been its namesake. The Guy golf course was a municipal course that opened in 1947 for white players in its early years. Brown had been "associated" with Guy at the course before he moved on to become the pro at a new "Negro Golf Course," as the State Times reported then in a clipping collected by the Mississippi Sovereignty Commission. Guy oversaw the building of the new Grove Park Gold Course off Livingston Road for African Americans. In 1964, Guy left Jackson to become the part owner and manager of the Confederate Heights Country Club in Rankin County near Florence, which opened for play in 1969. He had previously coached golf at Mississippi State.

Ridley said Brown, too, went on to become a golf coach and acquired a country-club membership in Jackson.

"Needless to say, if you walk with purpose, you'll collide with success. The steps of a good man are ordered by the lord, and I believe that," he said. "Pete Brown is definitely a man who is looking down on us right now, and he's saying, 'I'm happy about this.'"

The City of Jackson held the renaming ceremony at the newly named Pete Brown Golf Facility on West Woodrow Wilson Avenue near Hawkins Field on May 31. Mayor Chokwe A. Lumumba, council members, community members, and Brown's family and friends came together to honor his legacy.

"All over the world you hear about legends, but we have giants right here in Jackson, Mississippi, whose shoulders we stand on, who we don't recognize," Ward 4 Councilman De'Keither Stamps said. "I can think of no better way to recognize the life and legacy of Mr. Pete Brown."

Brown, who was born in Port Gibson, Miss., but raised in Jackson, became the first African American to win a PGA event. He learned to play golf after working as a caddy at the municipal course in Jackson. At last Tuesday's city council meeting, Parks and Recreation Director Ison Harris Jr. learned from Brown's wife, Margaret Brown, that black people were not then allowed to play at the municipal course, so Pete Brown learned by watching others golf.

"He would mimic or figure out what's wrong with their swing, and he'd be able to curtail (it)," Harris said.

In the 1950s, Brown contracted polio and was paralyzed for a year. Eventually, he got the feeling back in his arms and legs, honed his craft, won the National Negro Open in 1961 and 1962, and received his PGA card in 1963. In 1964, he won the Waco Turner Open—the PGA event where he made history. He played the tour for 17 years and won again at the Andy Williams San Diego Open Invitational in 1970. He was the head professional at Madden Golf Course in Dayton, Ohio, for more than 20 years, where he ran a junior golf program.

Brown died at the age of 80 in 2015. His wife, Margaret, and his daughters survive him.

As the City of Jackson made renovations to the golf course, Lumumba said it did not feel complete until he saw Brown's photos and memorabilia, which sat on display at the ceremony for guests to admire.

"To have our golf course named after a legendary golfer—but from what I hear after talking about his memory and talking to people who knew him, someone who was far more impressive just as a person—the City of Jackson is honored today to name this golf course after Pete Brown," he told the audience.

Kyle Alford, Brown's friend, recounted his favorite memories of him at the ceremony. He said Brown was an unbelievable guy, and he could talk about him all day.

"He not only had a great sense of humor, but this man, I tell you I never met anyone so kind," Alford said.

Margaret said Brown lived his life helping people, loving children and getting people interested in golf. He wanted to continue to help even after he was gone, which is why he donated his body for science and research, she said. At first, she was not a fan of his decision, but she eventually came around.

"I'm going to do the same thing. I will be donating my body to science and research because that's what he wanted, that's what I wanted, and I want to be with my husband," she said.

Following the ceremony, Margaret, Lumumba and some of Brown's friends went outside to unveil the new sign, which reads "Pete Brown Golf Facility."

"When we're able to honor a legendary individual such as Pete Brown, I think it says something about what we recognize (as) our history," Lumumba said.

CORRECTION: The above story is corrected to reflect that the Sonny Guy Golf Course was not originally a black course, but one that catered to whites. Brown became the pro at the new black Grove Park Golf Course off Livingston Road; Guy oversaw the building of that course. Editor Donna Ladd added the information based on old clippings and conflated the Guy municipal course with the Grove Park course. She apologizes for the error.