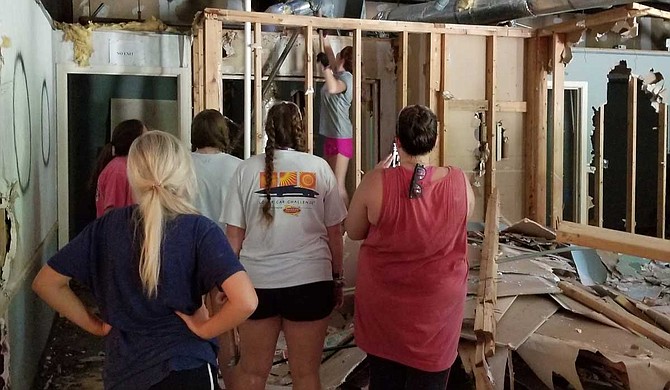 First Baptist Church of Fannin and Super Summer Serving mission groups help the Jackson Resource Center demolish a building in south Jackson to turn into a homeless resource center to help them get back on their feet. Photo by Putalamus White

Putalamus White, founder of the Jackson Resource Center, was working at the Gateway Rescue Mission Shelter on Gallatin Street In 2003 when she met 16-year-old Daniel. His parents had given the teenager a one-way ticket to Jackson and told him "to figure it out." The center did not take underage individuals, however.

There was nowhere for Daniel to go, and he was sleeping outside the shelter. After his first day, White took the boy home with her.

"I got him into high school, he graduated, he went to college, and he's living a very productive life," she told the Jackson Free Press on July 17.

White knows she kept Daniel from living off the streets and that if she had not taken him in, he could be living a very different life. "Not everyone has that (help). There's a possibility we can change that trajectory," she said.

White is hoping to change the state of homelessness in the capital city through the Jackson Resource Center, which The Healing Place is set to build in west Jackson.

"It's going to be a one-stop shop where services, agencies and community organizations are coming under one roof to service the needs of those individuals that are in need," she said.

The Mississippi Department of Motor Vehicles, the Department of Human Services, vital statistics and medical treatment are some of the services the center will offer.

West Jackson residents are resisting White's plans to put the center in their community, however.

Residents made it clear they do not want the center in their community.

White said she has compassion for their rejection of the center, but added that it is disheartening to not have their support. "I understand if we're not open-minded to new and open ideas that we haven't seen, then we'll never see real change," she said.

She has sat down with the west Jackson residents to discuss the center in detail, but they stood firm in their decision to oppose the project in their community.

"I believe a lot of people think we're coming in to be another shelter or another soup kitchen that wants to hand out stuff. We're giving people a hand up, not a hand out," she said.

Sheila Harper told the Jackson Free Press that she has not seen any positive changes in the neighborhood from Stewpot or the opportunity center moving into the west Jackson neighborhood. Harper wants the Resource Center to work with organizations already in the community.

"Help the Stewpot. Help the opportunity center then. Help them create a plan where it can be economically feasible for these people to have a sustainable life," Harper suggested.

Despite Harper's suggestion, White said she has had conversations with the assistance groups in the neighborhood, but that it has been difficult, she said. "The opportunity center is not large enough for the services we're proposing to bring into the community," she said.

White has visited resource centers in other cities for ideas. If the resources are under one roof where most individuals who need the services are located, it will be easier for those individuals to change their life, she has learned.

"We've found that these resources have helped lower the homeless population once they get the help they need. They can go from living on the streets to being in their own apartment and getting jobs," she said.

'We Don't Have True Facts'

Last year, White learned that a young man and his family were sleeping in the lobbies of local hospitals for four and a half months of his senior year in high school. She found out because her neighbor messaged her through Facebook and asked if she could help them.

White said there are many homeless people that "go through the cracks" by not going to homeless shelters or parks for refuge, but go to a neighbor or friend for assistance. Because of this, it is hard to know exactly how many local residents are homeless, she said.

"We don't have true facts," she said. "We have called the Jackson Police Department, hospitals, the Department of Mental Health to get some type of stats, and nobody speaks numbers."

It does not give you an accurate count, White said. "Say we go under the bridge on Gallatin (Street) and see if anyone is out there and count the number of people there at 6 a.m. If it's 20 people there, that's all we can document," she explained.

"There is a spot on Northside Drive near the interstate. There's a building the homeless have broken into, and they stay there. If you don't know that spot, you can't count them. It's a broken system," White said.

White said she had a meeting with Mukesh Kumar, director of the City's Department of Planning and Urban Development, to suggest software, Charity Tracker, that could link all the agencies and organizations in Jackson that help the homeless.

"The fact that we are not all connected makes it hard to get numbers. There's so many that go through the cracks that you don't know about," she said.

The Jackson Free Press reached out to Mukesh Kumar for a response to White, but he was not available for comment.

'Committed to Doing That Work'

In 2015, the City of Gulfport managed to get veteran homelessness to functional zero, which is the threshold demonstrating that veteran or chronic homelessness has ended. Mary Simons, executive director of the Open Door Homeless Coalition, said her group achieved this by partnering with Community Solutions' Built for Zero.

Simons said they had counted 98 homeless veterans in January 2015 and by the end of that year, the city and their partners had housed 276 veterans and their families. She said since 2014, they have placed an average of 150 families in housing and provided services for them.

"Prior to them, we were similar to a lot of communities. We have great programs but weren't necessarily going beyond meeting together. We would track individual programs but didn't pay enough attention to what was happening in between the programs," she told the Jackson Free Press.

Anna Kim, strategic communications, said Community Solutions is a nonprofit that works to end homelessness and the conditions that create it. "(Built for Zero) is a national movement of more than 70 communities that are working to end homelessness," she told the Jackson Free Press.

"Primary drivers of that experience tend to be health crisis-related or connected to job loss, but again, it's so many things. Structural racism also continues to be a massive driver of who experiences homelessness, and for how long," he said.

Kim said Built for Zero uses VI-SPDAT, which stands for "vulnerability index service prioritization decision assistance tool," to help understand homeless individuals, what their vulnerabilities are and what support they need.

Maguire told the Jackson Free Press that VI-SPDAT is a short questionnaire that asks homeless people about their experiences. "What kind of resources might make the most sense? What intervention do we want to triage them towards?" he said. "Communities need an intelligent way, just like when you go to an emergency, to sort through the folks they're dealing with and connect people to the right programs."

He said you use the questionnaire for 15 minutes, and it will spit out an acuity score. The score helps indicate how accurate a person's needs are and how severe their situation might be. "It should never be used alone. It's not a robot. It's designed to be used with clinical judgment and what else we know about that person," he said.

Maguire said each city has a different process for finding and interviewing homeless individuals and it depends on how someone is experiencing homelessness. "Ideally, no matter where you show up as homeless, you get assessed the same way into a shared database with appropriate privacy protections for your data," he said.

Simons said Gulfport has partnered with Community Solutions since 2014, using the VI-SPDAT. The tool made a big difference. "That was the first time we were really seeing everyone by name, understanding their vulnerability, understanding what was really going on with them and what their needs are," Simons said.

Simons said the system also helped them figure out what services to increase. They formed partnerships with mental-health centers, identified homeless veterans who needed mental-health care and made appointments for the centers to see them.

She said it was exciting to get veteran homelessness from 98 veterans experiencing homelessness to functional zero by the, but the work does not stop because they must sustain the effort. They are now working to reduce chronic homelessness, she said.

"We still have lots to do until there is a pathway to a solution for everybody. Even though we as a community have achieved some really ambitious goals, there is still so much work to do, and we're committed to doing that work," Simons said.

There is no date for construction of the west Jackson center, White said; however, she wants to work with the community and not against them.