Stamping Out HIV Stigma in Mississippi 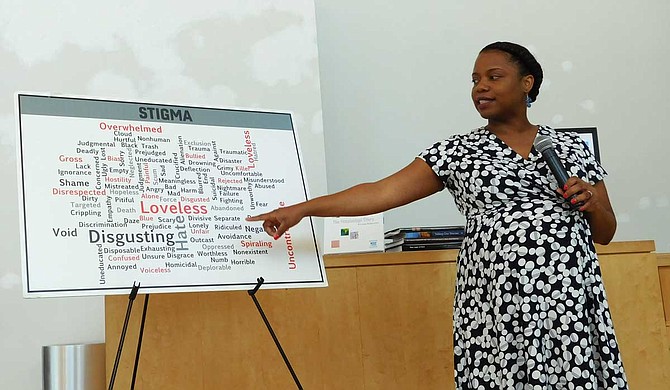 Alecia Reed-Owens, staff attorney for the Mississippi Center for Justice, points to different words that represent the stigma associated with HIV at Refill Cafe’s Friday Forum on July 12. Photo by Josh Wright

When Alecia Reed-Owens and Linda Dixon Rigsby asked people living with HIV to give them one word to describe how the stigma around the disease affects them on a daily basis, they heard things like, "loveless," "disgusting," "painful" and "bully."

"We want to stamp that out and eradicate it because we believe this is what fuels discriminatory behavior, and those numbers are going to continue to increase. We feel individuals won't be encouraged to be tested and know their status," said Reed-Owens, who is a staff attorney for the Mississippi Center for Justice.

At Refill Cafe's Friday Forum on July 12, Reed-Owens and Rigsby, the center's health law attorney, discussed HIV stigma and discrimination. Rigsby said the Mississippi Center for Justice, or MCJ, is a nonprofit public-interest law firm. She and Reed-Owens primarily focus on HIV work, which they have been doing for almost 10 years.

"First, we started by looking for an area to just expand our health-law work. It started with a research project, and I was completely blown away by what I learned, and that's how this project was born," Rigsby told the audience. "We're very proud of the work we do around HIV here in Mississippi."

Reed-Owens said Mississippi has more than 9,000 people living with HIV, and 2,600 of those live in Jackson. The state ranks eighth in the country for new HIV infections, and the city of Jackson ranks sixth in the country.

They also surveyed people living with HIV to see what issues they had. The three recurring ones were employment discrimination, housing discrimination and privacy violations, Rigsby said.

"Now those are all problematic. If you don't have affordable housing, it's hard to be compliant with medications because you don't have stable housing," she said. "If you are having issues on your job because someone learns about your status, and you're being harassed, or you have a decline in hours, that's a problem."

She and Reed-Owens offer individuals living with HIV advice and legal counsel in those areas. People didn't even know they had legal protections, she said.

She said along with doing policy reform and advocacy, the organization is also working on HIV decriminalization. Mississippi Code Title 97, Chapter 27 says if a person knowingly exposes someone to HIV, it's a felony. If a person exposes a correctional officer or anyone in a correctional facility to HIV or Hepatitis B and C through urine, blood, saliva, feces or semen, a person can get up to 10 years in jail.

"I said expose. I didn't say transmit. Now the second layer of that is not scientifically accurate because you cannot transmit HIV through urine, saliva and feces. So people are being arrested, prosecuted and imprisoned for something that's not scientifically capable of happening," Rigsby said.

"When people are newly diagnosed, the last thing they think about is their legal rights," Rigsby said.

Residents can help with she and Rigsby’s mission by being engaged and learning more about HIV stigma and discrimination, she said.

"It doesn't need to be a taboo topic. It's not a black disease. It's not a gay disease. This is something we can all get our support around," Reed-Owens said.

CORRECTIONS: In the original version of this story, we called Alecia Reed-Owens by Alexis Reed-Owens. In one instance, we also said police reform instead of policy reform. The Jackson Free Press apologizes for these errors.