Dan Magee: ‘Keep on Ducking’ at Museum After Hours 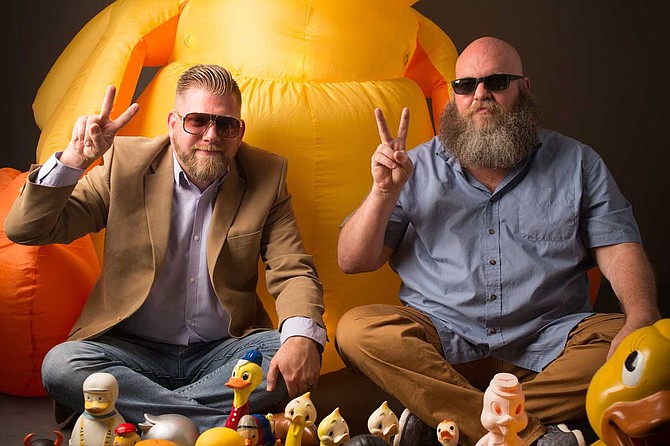 The Mississippi Museum of Art will showcase Dan Magee’s (right) collection of rubber ducks, along with Allen Cotton’s (left) photos of the ducks. Photo by Dan Magee

Dan Magee was on vacation in Miami's South Beach in 1999 when a rubber duck washed up.

"I took it home and put it in the bathtub, and my friend, he said, 'That duck needs a friend,'" Magee says.

He bought another rubber duck, and thus began a 10-year journey of collecting around 5,000 of the toys.

"It started out with a little pile in the bathroom corner in a bowl, and then they outgrew the bowl, and then I decided I would make some kind of duck house to put them in," he says. "The next thing you know, I've got a duck room in my house."

For the Museum After Hours on July 18, the theme of which is "Birds of a Feather," the museum will showcase around 2,000 of Magee's ducks, along with small- to large-sized prints, in an exhibit called "DUCKrageous."

Magee stopped collecting the creatures around 2009 but kept them over the years with a plan of showcasing them somehow. The original plan was to have Magee's friend, James Patterson, photograph the ducks.

"We always talked about shooting the ducks together and having the greatest show on earth," Magee says. "Well, that was me saying all that."

After Patterson passed away in early 2019, Magee didn't think he would get another chance to showcase his collection. Then, he met Allen Cotton, another local photographer and a friend of his brother Matthew. Cotton had come over to Magee's house to hang a disco ball over his kitchen table. He had heard of the collection through Matthew and a couple of other people.

"I just got to talking to him about the ducks and asked questions," Cotton says. "He was almost a little reluctant to show me the duck collection."

At that point, Cotton says Magee was getting ready to throw the ducks out, but then they started talking about Magee and Patterson's plan. "I said, 'Well, let's not let this project die. Let's do this in honor of your friend who passed away,'" Cotton says.

A few days later, he and his son Reese went to Magee's house to begin photographing 400 ducks, the process of which Cotton estimates took about 22 hours spread over three trips.

"I almost became numb to the ducks," Cotton jokes. " ... It was great to just hang out and see how happy the ducks made (Magee)."

The collection at the museum will have vintage and modern ducks, collectible ones, rubber ducks of all sizes and more. People can also see more specific ones such as writer- and court-reporter-themed ones. "They make a duck for just about anything," Magee says.

The name "Birds of a Feather" comes from the bird-themed content in and around MMA right now, including the Birdcap and Big K.R.I.T. mural at the Arts Center of Mississippi, Magee's exhibit and the opening of "Pappy Kitchens and the Saga of Red Eye the Rooster," says MMA Director of Communications and Marketing Stacy Clark.

"We've found ourselves surrounded by a lot of bird content all of a sudden," Clark says of the collection.

Though Magee is unsure about the ducks' future, he has high hopes for it. "... If the future is bright, and I know it is with the 'DUCKrageous,' maybe something will happen, and we can make even bigger ducks and more than just one 10-foot-by-10-foot duck (print)," he says. "We can really fill up the museum. You never know what's going to happen. We just keep on ducking, I guess."