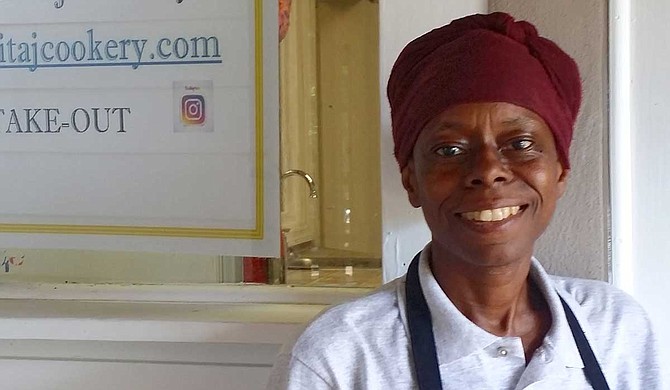 Eritaj" means "inheritance" in Haitian Creole, and Felicia Bell, owner of Eritaj Cafe in the Kundi Compound, has inherited much. Her family has owned and worked farm land in the Brandon area for five generations, so she grew up tending livestock as well as learning about vegetable production for the homestead. She also learned how certain herbs can benefit the body and how she can use them in cooking.

"Different pastries can be very delicate, so (baking is) a tedious type of cooking," Bell says. "You have to be focused. ... I'm  assuming that was her thought process—learning how to (bake) first because it's so tedious."

Bell attended Northwest Rankin High School and graduated in 1989. In 1992, she inherited the land RD&S farm now occupies from her grandfather, R.D. Burnett.

After starting a family, Bell sought ways to sate the appetites of her three boys with healthy meals while also not breaking the bank. Using the Crockpot, she was able to create nutritionally dense meals that satisfied their bodies using less food, she says.   Now, she shares those recipes with the public through Eritaj, which opened in June 2019.

Another benefit of using a Crockpot is it requires less vigilance than using a stove. And because her Crockpot recipes can feed  multiple people, Bell can charge less per meal, allowing people from all economic backgrounds to patron her business.

"If I were to fix a grass-fed burger, that can be upwards of $12 because the meat is very expensive," she says. "But if I take that same ground meat and place it in a Crockpot meal, now I can serve it to more people. Instead of just one person paying $12, now I can let everyone taste that ground beef and say, 'Oh, that is so good.'"

Eritaj operates under a "worker cooperative" model, which means that those involved are business partners rather than employees, and each has equal ownership. Bell's two partners are DJ Baker, owner of farming consulting business Esculent, and Salu Binahtabor, Bell's middle son and owner of Vegone Donuts.

Thus far, Eritaj has received positive feedback, Bell says, which she attributes to the amount of vegan and vegetarian options, filling in an under-represented niche in Jackson.