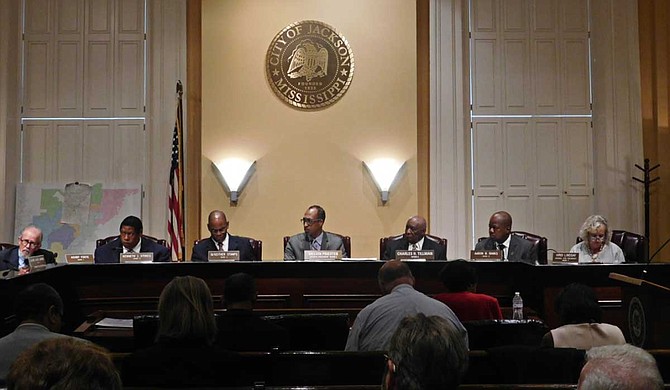 JACKSON—Some west Jackson residents say they fear that a planned resource center for the homeless could make things worse by "segregating" services for homeless populations, the mentally ill and those suffering with drug addiction.

"So we decided to come to you all," Harper told the council members.

The association emailed a letter to each council member on April 30 regarding the meeting and community concerns. Shantia Escalante, a member of the association, read the letter out loud at last week's council meeting. It claimed that residents do not want the community center in west Jackson.

"Once again, west Jackson is a designated location for a project that neither economically develops nor culturally enriches our community; but rather another project that imposes further stress, by segregating services for the homeless, mentally ill, drug addicted, and other transient, marginalized individuals, in one section of the city—ours," Iscalonte said as she read the letter aloud.

Vernon Hartley, a representative of the Poindexter Park Neighborhood Association, said that they are not against helping homeless people, but would like the council to focus city resources on other issues in their area.

'Please Consider the Integrity of Our Neighborhoods'

He said they want the council members to consider the tenants and the "integrity" of their neighborhoods.

"We're not against the homeless, but we need someone to rescue us," Hartley said. "We need help from the city council in making sure west Jackson stays a viable community, in making sure our sidewalks are cleared from grass and overgrowth. We're asking the city council to please consider the tenants. Please consider the integrity of our neighborhoods. Please let us know if and when there are any zoning concerns. Allow adequate time for public notice and a public comment period."

Stokes said he worries that the center could make the neighborhood unsafe for children and families. "We all want to help," he said. "But you cannot allow that neighborhood to be the sole source for trying to do something for the homeless."

Stamps did not say whether or not he was against the center being built, but he did address the rising homeless population affecting the west Jackson parks.

"If we just allow the population to spew over into the park, that's all it would do. We have to find a way to process people to the services and the adequate help they need," Stamps said.

Stokes believes the city should get the homeless out of Poindexter Park and make it a first-class park instead. "I support y'all 100% what y'all trying to do with y'all community," Stokes said.

Putalamus White, founder of the Jackson Resource Center, told the Jackson Free Press that the intention is not to bring more homeless people into the community, but to help the homeless who are already there.

The center does not have a projected opening date, yet. For more information, visit reachjackson.org.

Kimberly Hilliard, who represents businessman and former Jackson State School of Business Dean William Cooley, sought support from the council for the disposal of a surplus property at the corner of Roseneath and 4th avenues. Cooley and the Center of Social Entrepreneurship want to take the property and build it into an education complex in west Jackson.

"It would be named in honor of his late wife, Lillian M. Cooley. It will be innovation center around STEAM, including the arts. It would be an extension of their existing programming at Barr Elementary, which is centered around literacy," Hilliard told the council. STEAM stands for science, technology, engineering, arts and math.

The program takes the lowest-performing students and works with them to improve their reading skills and other life skills, Hilliard said. Due to popularity, they need to extend the program.

"They will erect a new building with your support. It will also support entrepreneurship and workforce development for the ages of 18-24 and adult lifelong learning," she said.

Stokes thanked Cooley for his support for west Jackson. Somewhere down the line, the city and community has to fulfill the dream of removing the blight that surrounds Barr, Stokes said.

"Barr (Elementary) has been a special school in this city for a number of years, and Dr. Cooley has been special. He, his daughter (Toni Cooley) and his wife, while she lived, they cared about this city," he said.

Willliam Cooley is one of those veterans that has "come back to Jackson and put his money where his mouth is," Stamps said.

"I appreciate him and his whole family," Stamps said. "To do this in honor of his late wife, it's just amazing. I can think of no better person that we could trust with this property."

In another STEAM-related item, Mike Williams, representative for the City's Department of Human and Cultural Services, sought the council's approval to revise the department's budget. The department wants to use an unused portion of its funds for a summer STEAM program for rising third through fifth graders.

Williams said kids would be able to sign up for the camp two or three months before the end of the school year. Ward 2 Councilman Melvin Priester Jr. suggested the department come back to the council so they can have an item to notify the public about this opportunity.

"Thank you for doing some really great things for our kids," Priester told Williams.

The council voted unanimously on both items.

The city council voted to pass an ordinance renaming Terry Road Pool to Hertz Pool. California-based Hertz Investment Group has renovated pools in urban communities in cities like New Orleans and Baton Rouge. The group invested funds to help fix the pool, which has been open since 2018 to communities in south Jackson.

"This (is) not hurting anybody to have this pool named after this person. It's something good. So, I'm ready to vote, Mr. President," Ward 3 Councilman Kenneth Stokes said.

"I just want to thank New Horizon church, and I also want to thank Hertz Pool for their investment so that the kids in south Jackson have somewhere to swim," Ward 6 Councilman Aaron Banks said.

Ronnie Crudup Jr. of New Horizon Ministries, and now a state legislator, spearheaded the pool renovation, as he wrote about in the Jackson Free Press in September 2018.

James Ingram, Hertz chief investment officer, said the group sponsors swimming programs in New Orleans and Shreveport. It's not about just playing in water, but teaching young men and women how to swim so they can teach their brothers and sisters how to swim, he said at the meeting.

"So if these people are in a boat fishing 10 years later, (and) one of them falls out of the boat, they know how to swim to shore.That's what we're trying to do is encourage young people to get off the streets (and) go to the pool when it's hot," he said.

Ingram said the pool had not been in operation for seven to eight years, and Hertz spent between $35,000 to $40,000 to get the pool back up and ready. They funded the operation through Labor Day last year.

"By naming the pool Hertz Pool, I think that shows the city's appreciation to my CEO, Judah Hertz. We'll be doing this for many years to come. We thank you very much for this opportunity," Ingram said.

CORRECTION: In the original version of this story, we spelled Shantia Escalante's name wrong. The Jackson Free Press apologizes for this error.