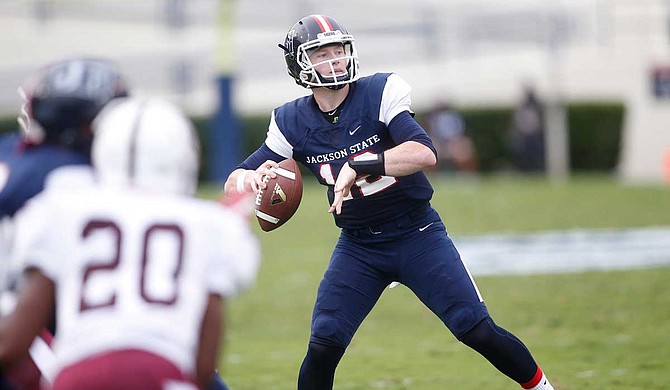 Now that the calendar has turned to July, the unofficial start of college football is upon us. July means conference media days, where coaches and players from each conference meet with the media to discuss the upcoming season.

Since letting go of former head coach Rick Comegy after the 2013 season, JSU has yet to record a winning season. Last season's 5-5 record is the first time the Tigers have finished at .500 since the program let Comegy go.

JSU has struggled to find the right head coach, and that has translated to the players on the field. Hendrick was the interim coach last season before JSU named him head coach this year. It will be his job to get JSU back to challenging long-time rival Alcorn State University for supremacy of the SWAC East division.

One thing that would help the Tigers rise back to the top of the division would be Ponder's play.

Jarrad Hayes then replaced Ponder as the starting quarterback. Ponder played in nine of the 10 games but finished the season with just 521 passing yards, one touchdown and four interceptions. Hayes finished the season with 847 yards passing with six touchdowns and four interceptions but is gone from the team after he finished his college college career last season. Neither quarterback was great for JSU, as the Tigers finished last in the SWAC in passing in the 2018-2019 season.

Ponder finished spring practice as the front runner for starting quarterback over Western Michigan University transfer Matt Little and redshirt freshman Jack Strose. Hendrick didn't name a starter for this fall, but early on it looks like Ponder, a Bells, Texas, native will get a second chance to lead the Tigers.

As a high-school senior, Ponder put up big numbers in 2015. He threw for 4,001 with 47 touchdowns and 12 interceptions. In high school he completed 61 % of his passes. He redshirted in his first season at Navarro College in Texas before the team used him as a back up in his second year. He started playing for JSU in 2018.

If Ponder can regain the form he had in high school, he could help JSU challenge Alcorn State in the SWAC East. If not, the Tigers will have to decide quickly on moving on to a new starter.

Right now, Ponder will get his chance this fall to show he can take JSU back to the top of the conference. Tigers fans will expect nothing less.