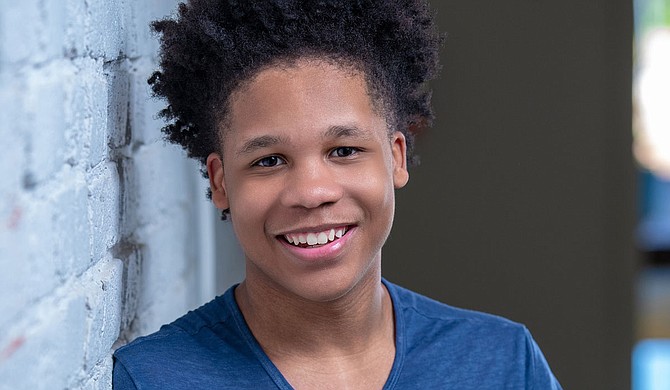 Murrah High School senior Jeffrey Cornelius receives the up-and-coming artist of the year from the Mississippi Jazz Foundation during its 16th annual Night of Musical Artistry. Courtesy of Jeffrey Cornelius.

The Mississippi Jazz Foundation named Jeffrey Cornelius, a senior at Murrah High School, as the up-and-coming artist of the year during its 16th annual Night of Musical Artistry at Duling Hall on Nov. 29. During the event, the foundation honors Jackson artists who have made exceptional contributions to music scene.

Cornelius, 16, has been a musical theater performer with New Stage Theater in Jackson since 2013. He received the up-and-comer award for his recent performance in a cabaret at New Stage’s Toast to Broadway, an annual fundraiser at Jackson’s Old Capitol Inn that honors longtime performers with the theater group.

Lynda Swims, Cornelius’ grandmother, helped introduce him to New Stage when she signed him up for the group’s annual Broadway Junior Theater Camp during the summer of 2013. Cornelius had performed on stage as Tiny Tim during a production of “A Christmas Carol” at McWillie Elementary School before attending the camp, but his time there still proved to be a new and unexpected experience for him, Cornelius told the Jackson Free Press.

“That year, the theme of the camp was ‘High School Musical Junior,’” Cornelius says. “I hadn’t expected much going in, but I ended up getting my first leading role as Ryan Evans. Being there was insightful because I had never thought of theater as something people could take so seriously. Seeing all the teachers there and how they loved what they were doing made me want to do it too.”

After four weeks of rehearsals at the camp, participants got the chance to audition for the following season of performances at New Stage. Cornelius succeeded in his audition and New Stage place him in his first official role as Young Scrooge in its 2013 production of “A Christmas Carol.”

“At this point I feel like I’ve grown up with ‘A Christmas Carol,’ from being Tiny Tim in elementary school to being part of the adult ensemble track now,” Cornelius says. “Looking at kids performing in the junior troupe today, I can remember being where they are now. Getting to work with professionals in the field has made an even deeper impression on me, and now I know it’s what I want to make a living doing.”

Recently, Cornelius received an invitation to attend The Impulse Musical Theater Workshop at the University of Michigan. For three and a half weeks, Cornelius and 39 other students will work with professional Broadway performers to learn about the craft and the college musical theater audition process. Cornelius says he plans to pursue a degree in musical theater from UM after graduating a year early from Murrah High School in May 2020.

“I’ve come to see theater as a chance for me to let go of what’s happening in my day-to-day life, tell a story full of lessons to be learned and focus on giving the audience a good performance,” Cornelius says.

Cornelius is also a member of the speech and debate team at Murrah and is involved in the school’s Power APAC theater department and Power APAC orchestra. Cornelius has been playing instruments since he was 6 years old and currently plays piano, guitar, violin, cello, ukulele and more.

His mother, Kimberly Cornelius, works for United Health Care, and his father, Marc Cornelius, serves as a manager at Nissan.