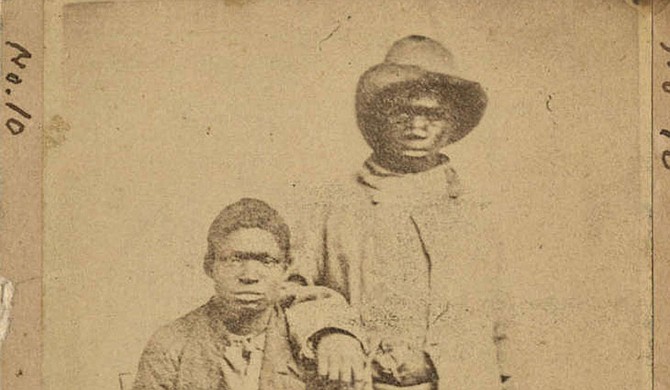 Items in the "Enslaved People in the Southeast" exhibit include records from auctions and plantations, materials from the abolitionist movement and photographs from the Jim Crow South. Photo courtesy MSU

Mississippi State University Libraries recently partnered with the Association of Southeastern Research Libraries to launch a shared online exhibit titled "Enslaved People in the Southeast." The first-of-its-kind exhibit commemorates the 400th anniversary of the beginning of the slave trade in the English Colonies, a release from MSU says.

University Archivist Jessica Perkins Smith serves as co-chair of the collections group that developed the exhibit, and MSU Coordinator of Manuscripts Jennifer McGillan served on the exhibit's curation team.

"Enslaved People in the Southeast" contains materials from 33 ASERL member institutions, as well as material from three members of the HBCU Library Alliance. Items in the exhibit include records from auctions and plantations, materials from the abolitionist movement and photographs from the Jim Crow South.

Perkins Smith said in the release that items on display from MSU's archives include freedom papers, receipts for enslaved persons and letters from plantation owners relating to enslaved persons on their land.

To view the online exhibit, visit the ASERL website.

The University of Southern Mississippi recently announced that it will make the role of women in democracy the focal point of its upcoming spring 2020 University Forum programming.

USM's Honors College presents the University Forum, and all events are free and open to the public. The theme of this year's event is "A Year of Speakers, a Century of Progress."

Thomas will present "The Hate U Give: Finding Your Activism" on Tuesday, Feb. 11, at 6:30 p.m. in the Thad Cochran Center Ballrooms.

Her debut novel, "The Hate U Give," was on the New York Times young adult bestseller list for two years and received a film adaptation starring Amandla Stenberg in 2018. Thomas' second novel, "On the Come Up," was published in February 2019. She received the 2018 William C. Morris Award and the 2018 Waterstones Children's Book Prize.

Spruill, a former USM history professor who served as the University Forum director from 1986 to 2000, will present "Votes for Women: The Story of the Nineteenth Amendment" on Tuesday, March 24, at 6:30 p.m. in Bennett Auditorium.

Her book, "New Women of the New South: The Woman Suffrage Movement in the Southern States," is about the lives of 11 leaders of the women's suffrage movement and their views on race and states' rights. She also wrote "Divided We Stand: The Battle Over Women's Rights," which covers the rise of the modern women's rights movement in the 1970s.

Spruill is a distinguished lecturer of the Organization of American Historians and professor emeritus at the University of South Carolina.

Kantor will present "Breaking the Sexual Harassment Story that Helped Ignite a Movement" on Tuesday, April 7, at 6:30 p.m. in Bennett Auditorium.

Kantor, a New York Times investigative journalist, worked together with Megan Twohey in October 2017 to break a story about decades of sexual abuse allegations against film mogul Harvey Weinstein, which helped sparked the #MeToo movement and its new standards of accountability for sexual harassment.

Kantor, Twohey and Ronan Farrow with the New Yorker all received the Pulitzer Prize for Public Service in 2018. Kantor later wrote about the aftermath of the Weinstein story in her book "She Said: Breaking the Sexual Harassment Story that Helped Ignite a Movement."

The Else School of Management at Millsaps College recently announced that it has developed a new certificate in data analytics program, which the university will launch during its spring 2020 semester. The certificate is only available in an online format.

Kim Burke, dean of the Else School, says in the release that students in the program can complete the certificate within 12 months.