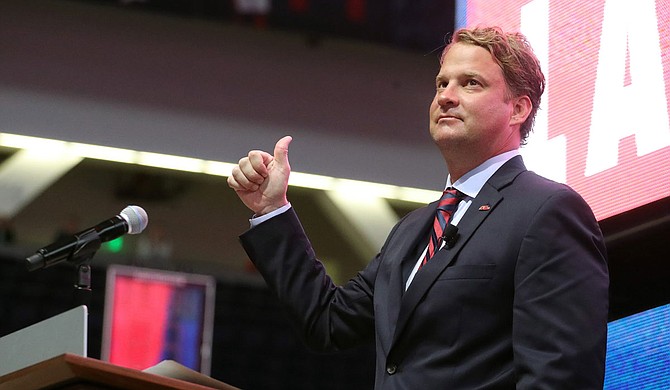 He replaces Matt Luke, whom UM fired after losing this year's Egg Bowl, and will become the 39th head coach in the school's history.

Kiffin coached the Owls for three years and led the program to two C-USA titles. He is leaving FAU with a 26-13 overall record with conference titles in 2017 and 2019.

No coaching hire this season will come with the baggage that Kiffin is carrying into Oxford from his past coaching stops. Controversy has followed Kiffin from the NFL and college ranks throughout his career.

Kiffin is the son of well-respected defensive guru Monte Kiffin, and that relationship allowed his career to take off quickly. After spending 1997 to 2004 as a position coach at Fresno State University, Colorado State University, the Jacksonville Jaguars and the University of Southern California, Kiffin became offensive coordinator for USC for the 2005-2006 season.

At age 31, Kiffin became head coach of the Oakland Raiders. He lasted just 20 games, going 5-15 before late owner Al Davis fired him. The breakup, like most of Kiffin's endings, was ugly and messy.

Kiffin made his first stop in the Southeastern Conference at the University of Tennessee in 2009. He picked fights with nearly every coach in the league, even saying how he would enjoy "singing Rocky Top all night long after beating the University of Florida."

The Gators won 23-13 over Tennessee, and Kiffin irritated then-SEC Commissioner Mike Silve. The marriage to the Volunteers didn't last long, however, as Kiffin jumped ship after a 7-6 season to take over the head coaching job at USC.

Things started well at USC as Kiffin went 8-5 in his first season in 2010 and finished 10-2 in his second season with expectations on the rise for season three. USC slipped in 2012 to 7-6 with a loss in the Sun Bowl.

USC fired Kiffin while he was waiting on a ride home from the Los Angeles airport after starting the 2013 season 3-2 and 0-2 in the conference. Lane Kiffin being fired on the tarmac ended up being something you expected to hear about the controversial head coach.

Needing an image rehab, Kiffin joined Nick Saban's coaching staff as quarterbacks coach and offensive coordinator. It was a position he excelled at and allowed him rework his image.

As all things Lane Kiffin, it was not a happy goodbye at Alabama. Saban dismissed Kiffin after feeling he was spending too much time preparing for the FAU job instead of focusing on Clemson University in the national title game.

FAU is the first job in a long time Kiffin left on good terms or at least not being run out of town before it ended. Landing at the Oxford Airport, a fan handed Kiffin a baby and told him to get a burner phone.

Time will tell if his three years spent at FAU helped Kiffin grow up or if his mouth and Twitter account land in him hot water. Only time will tell if the Rebels are just a stopping point before another blueblood like USC comes calling.

Until then, it is all aboard the Lane Train in Oxford.