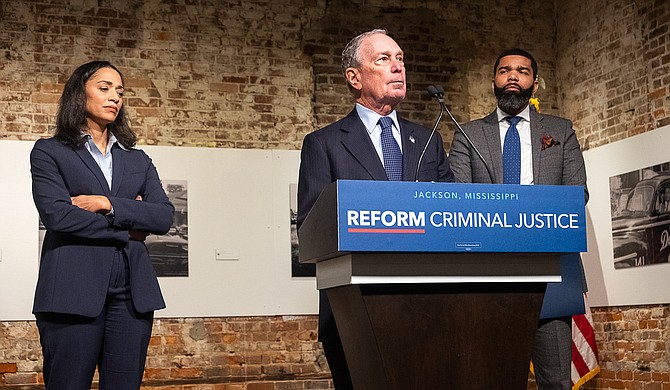 Following the private meeting, the former New York City mayor revealed to members of the press that he is running on a criminal-justice reform platform. He promised to cut the United States prison population in half by 2024, eliminate juvenile incarceration for non-violent offenses, invest in alternatives to incarceration initiatives, and fund local violence-interruption efforts across the country.

Criminal justice reform is particularly urgent in the State of Mississippi, which has the third highest incarceration rate in the country and the largest black population, a demographic that the U.S. justice system continues to disproportionately criminalize.

Since announcing his campaign for the presidency on Nov. 24, Bloomberg has responded to criticisms for his role in ramping up the controversial "stop-and-frisk" street-policing program when he was mayor of New York City from 2002 to 2013. The program, which allows officers to stop, question and search people without a warrant on the grounds of suspicious activity, disproportionately targeted African American and Latino men between the ages of 18 to 24 under Bloomberg's tenure. Most of them were innocent, but were nevertheless initiated into the criminal-justice system as a result of contact with police.

"I made a mistake. I was wrong, I regret it, but I can't undo history," Bloomberg told reporters at the Smith Robertson Museum, which focuses on African American history.

"What I can do is continue to work as hard as I can to make sure that we stop all of the murders and shootings," he said, adding that he hoped to "take back to New York ideas that the private sector can implement."

Bloomberg had not apologized for his administration's harsh application of stop-and-frisk until after he announced his presidential campaign this year.

Lumumba lauded Bloomberg for owning the failures of "stop-and-frisk," a policy that Lumumba emphasized that he does not support and that a federal judge eventually ruled unconstitutional. "The type of leadership I admire is the leadership that can not only take account of its successes but can be introspective enough to recognize that things maybe did not go as they should have gone," Lumumba said.

The mayor, who has faced criticism due to Jackson's participation in "Project Eject" and for taking more than a year to reveal the names of officers involved in shootings, also urged the press to consider Bloomberg's more effective work in other areas of criminal justice.

"I think that he (Bloomberg) deserves us to give a complete account of the fullness of his record ... [M]any of the programs in which he implemented in the City of New York, we are now taking on in the City of Jackson," Lumumba added, alluding to a credible-messenger and violence-interruption program that aims to launch in Jackson in January 2020.

During his opening remarks, Bloomberg referred to the criminal-justice system as being "tilted" against black and Latino people and vowed to fix it.

"You only have to look at the people in jail to see that that is true. It is disgraceful and I have said that if I am lucky enough to be president of the United States, that would be one of my key things to work on. I think we can fix that," he said before citing data from his time as mayor.

During the same period, however, crime dropped dramatically in cities around that country that did not employ the same level of "stop-and-frisk," and similar tactics targeting neighborhoods of color, including "Broken Windows," also known as quality-of-life policing as a way to increase misdemeanor arrests. Bloomberg had publicly defended the NYPD's racial-profiling tactics, arguing that people of color are more likely to commit crimes.

Police stopped more than 5 million people under the "stop-and-frisk" program during Bloomberg's tenure. During the program's peak in 2011, the NYPD made 685,724 stops—about 2,000 per day. Despite representing about half of New York City's total population, Black and Latino men accounted for 87% of those stops. In 88% of cases, they were innocent. While the practice has decreased significantly under current New York City Mayor Bill DeBlasio, the New York Civil Liberties Union reports that significant racial disparities continue to persist when NYPD officers do stop and frisk people.

Lumumba also framed Bloomberg's visit within the context of Mississippi historically being overlooked in national conversations on politics, education, the economy, criminal justice and more, a point he raised in a letter he co-authored with several other southern mayors earlier this fall. Bloomberg's visit to Jackson, Lumumba hopes, will provide an opportunity for the city and state to air its concerns in the lead-up to the 2020 presidential election.

"We wanted to make certain that as we go through this experience, that it is not a perfunctory experience but it is one based in the interest of our community and that people look at what's important to us," Lumumba said.

Criminal-justice reform is one of the most pressing issues for Mississippians, he added.

The need for violence-prevention strategies is especially profound in Jackson. In 2018, the city experienced its highest murder rate in two decades, with 84 homicides—a 31% increase from the year before. Organizers of a new credible-messenger and violence-interruption program hope to address the roots of gun violence and prevent crime in Jackson starting in 2020. While the City of Jackson has earmarked a small amount of money for the program, funding remains the biggest obstacle to implementing a dedicated, full-time and effective violence-interruption program in Jackson.