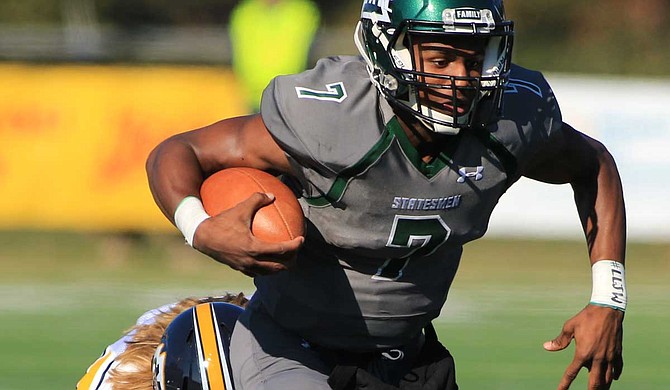 Barring major injury, there should not be much that keeps the Braves from another SWAC East championship.

Mississippi Valley State University won just a single game in head coach Vincent Dancy's first year at the helm of the program. Dancy has one of the toughest jobs in college football as he tries to turn around a program that has not won more than two games since 2012. Dancy returns just 34 players from last year's team, with 46 new players coming in as freshmen, junior college signees and transfers. All of these new players will have a chance to get on the field  quickly this season.

The Delta Devils did not land any players on either the First or Second All-SWAC Preseason team. One factor for no players from MSVU  receiving preseason honors could be the high amount of  player turnover.

The team could find a win in its game against  Virginia University-Lynchburg, but finding a second win looks difficult to predict at this point. Nevertheless, MVSU could pull out a surprise victory like they did in last year's win over the Arkansas-Pine Bluff.

Under head coach Todd Cooley, the 2018 season was a flop for Delta State University, as it lost its first seven games of the season before collecting a victory against Shorter University on Oct. 25. The Statesmen fell short, though, in the next game against the University of West Georgia in the penultimate game of the season. DSU finished the season with 28-21 win over Mississippi College. Finishing with two victories over the final three games gives some hope for the 2019 season.   One way Delta State can improve right away this season is by winning on the road. DSU went 0-5 away from home last season. Don't expect the Statesmen climb to the top of the Gulf South Conference, but the team should improve over last season and begin to move back up in the GSC.

The Choctaws have not had a winning season since going 9-3 in 2009, although this may partially be due to moving from Division  III to Division II and the adjustments that come with that.

Last season, MC led the Gulf South Conference in rushing per game with 266 yards per contest. That shouldn't chance in year two under  offensive coordinator Tommy Laurendine and his option attack. The defense finished near the bottom of the conference and needs to improve Tony Gilbert, new defensive coordinator. A middle-of-the-conference defense could mean a chance at a winning season if the offense doesn't slip.

Mississippi College should compete in the Gulf South and at the Division II level this season. If this team isn't in the running for a .500 season, changes could be coming to the coaching staff.

Belhaven University started the season on a three-game  losing streak that included a season-opening 18-3 to rival Millsaps  College. The Blazers earned the first win of the Blaine McCorkle era in a 20-19 win over Howard Payne University.

That winning feeling didn't last long, as the Blazers lost the next five games. Belhaven finished the season on a high note with an 8-0 win over Sul Ross State University. Belhaven, like  Mississippi College, is transitioning as a program. The Blazers  officially finished their move from NAIA to Division III.

While it would be a mistake to think the Blazers are ready to play for titles even with full Division III membership, an improvement from two to four wins is a step in the right direction.

Millsaps College started out hot to begin the 2018 season, winning its first four games, including a season-opening win over Belhaven and the first two games of Southern Athletic Association. The Majors, however, dropped the next five straight games after the fast start. The first three losses were close. Millsaps lost by three points to Rhodes College and 11 points to Austin College, and had a seven-point double-overtime loss to Berry College. A play or two difference in those three games could have led to a winning season, but the Majors finished 5-5 on the season.

Head coach Larry Williams has spent the last two seasons putting foundation and his stamp on the Hinds CC program. He has done a fair job replacing a legend in Gene Murphy as head coach.

This team started out losing two of its first three before going on a three-game winning streak. The season went south over the final three games, though.

HCC plays some of the toughest competition in the nation at the junior college level. That won't change this season. This year, the Eagles should finish with a winning record, but it won't be elite.

Holmes Community College has been going backward since 2016's 7-3 score. In 2017, the Bulldogs slipped to a 6-3 record, and last season they fell to a 5-4 record. If that holds, HCC should finish 4-5 this season, the same as the 2015 season. Just like Hinds, Holmes plays tough foes week in and week out.

Avoiding a midseason losing streak will be key for this team to finish near the top of the division. Just like Hinds, it feels like the Bulldog will turn things around and start to climbing back up the division. Prediction: 6-3