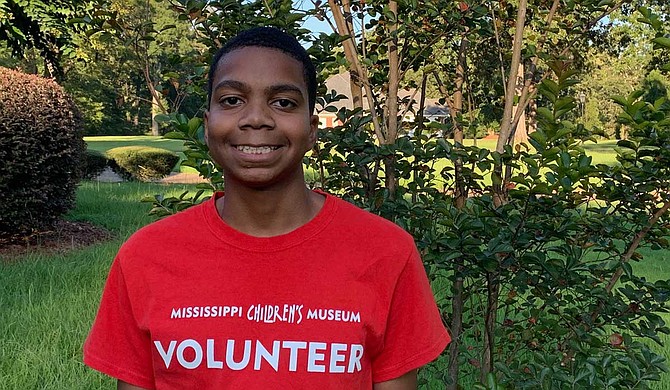 While some teenagers may have spent their summer relaxing, John Wicks III spent half of his volunteering with the Mississippi Children's Museum, where he became "Volunteer of the Month" for June of this year.

"MCM is in Jackson, and that's where I live, so it gave me the opportunity to give back to my community," he says.

Wicks, the 15-year-old son of Felice and John Wicks II, became affiliated with MCM on the recommendation of Monique Ealey, the museum's outreach coordinator and a member of Mount Nebo Baptist Church, where Wicks' father serves as pastor.

Wicks agreed to the idea and began working at the museum once school ended for the semester and summer began. He worked from 9 a.m. to 5 p.m. the first half of his tenure as a volunteer and from 9 a.m. to 1 p.m. the latter half. As a youth volunteer, Wicks would assist various stations within the museum, often with other museum volunteers and staff members.

"(Working at MCM) emphasizes teamwork. A lot of the times when you work in different stations, you're working with one or more people, so in order to do that you have to have teamwork," he says.

During his first day, Wicks had a positive encounter with a middle school-aged child who had autism—a moment that ended up aiding to his earning the honor.

"I was just walking around looking for things to do, and I saw her kind of by herself," Wicks said. "She looked like she maybe wanted to talk with somebody or something like that, so I just went over to her and asked her what she was doing. And we just talked for a little bit. And she was drawing with the art—she enjoyed art—and we were talking about that and things she likes to draw and things like that."

Afterward, the girl's mother made a point to go to Sharon Griffin, MCM's volunteer coordinator, and tell her how well Wicks did with interacting with her daughter.

"I didn't actually meet the mom that day, but the next day, they called me into Ms. Sharon's office, and they told me what the mom said our interaction was like," Wicks said. "She said the girl can be really paranoid and feel uncomfortable in a lot of situations but that she didn't feel uncomfortable talking with me. ... She doesn't talk much, but I guess she liked the fact that I came up with her and started a conversation with her."

Wicks finished with MCM the first week of July, but his busy summer did not end there. In the weeks leading up to the start of the new school year, Wicks attended a number of camps, including band camp and Tougaloo College's SLAM program. SLAM, which stands for science, language, arts and mathematics, gives students educational lessons that involve hands-on activities and applications of what they learn. Sponsored by the Jackson Heart Study, students such as Wicks learned about health and even dissected animal hearts to help them learn more about the organ.

In his free time, Wicks enjoys reading, practicing his trumpet and playing basketball with his two younger sisters, Faith, 12, and Grace, 9. Faith also volunteered alongside Wicks at MCM this summer.

Wicks is also involved with his church, where he sings in the choir and is in the church's Awana program, a world-wide nonprofit ministry that focuses on instructing youths with biblical lessons. On Tuesday, July 23, he participated in an oratorical contest with the General Missionary Baptist State Convention of Mississippi, Inc.

On Thursday, Aug. 8, Wicks began his sophomore year at Jackson Academy, where participates in both marching band and speech and debate. He currently aspires to possibly become a lawyer in the future.