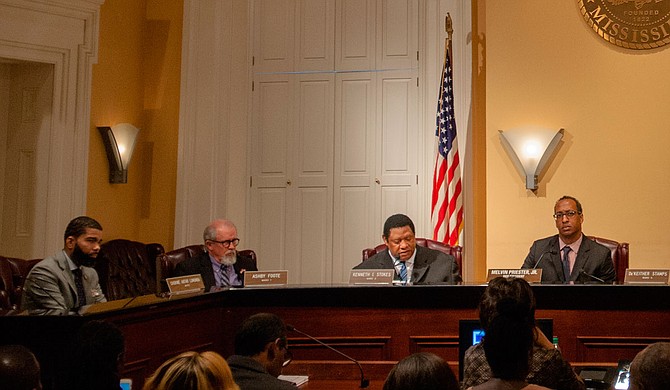 JACKSON—Each year, thousands of people gather at the state capitol complex for the Mississippi Book Festival. Over its five years of existence, more than 750 authors and 20,000 people have attended, data from the festival show. The City of Jackson recognized the festival's influence and importance at the Aug. 6 meeting.

Mayor Chokwe A. Lumumba called the upcoming book festival kicking off Aug. 17 a "world-class event" and said people travel from all over the world to attend.

"When we think about what Jackson has offered to the world, one of the things we fail to truly appreciate is that we have made such significant contributions to the literary arts," he said. "There are so many literary geniuses that have held from this sacred ground."

Holly Lange, executive director of the book festival, said Dav Pilkey, author of the "Captain Underpants" and the "Dog Man" series, will launch his new book at the festival. The event marks the first stop on his tour, she said. Lange said Pilkey is also going to meet with 4,200 schoolchildren, who all will get a free copy of his book, at Thalia Mara Hall on Friday morning, Aug. 16.

U.S. Supreme Court Justice Sonia Sotomayor is also attending the festival and will visit with children that Friday, Aug. 16. During the festival the next day, she will be on a panel with Newton County native and author Margaret McMullan at 10:45 a.m. in the sanctuary at Galloway United Methodist Church (305 N. Congress St.). Sotomayor will do a book signing at noon in Galloway's parlor.

"We like to give away books. We love to encourage reading, and there is something for everyone at the book festival, even if you don't love to read," Lange said at the council meeting.

C-Span will air the festival live.

"We are the third-most-watched book festival on C-Span TV. People all across the world watch us live," Lange said.

The council voted to approve three projects that will improve Jackson's roads and bridges.

The State Resurfacing Project will resurface State Street from Fortification Street to Woodrow Wilson Avenue. Waggoner Engineering Inc. will oversee the project, which will include pavement rehabilitation, sidewalk repairs and the replacement of traffic signals. The project will cost $412,285.36 for construction engineering and inspection services.

The City of Jackson accepted a bid from Hemphill Construction Company Inc. for $375,790 for the Meadowbrook Road Bridge Rehabilitation project. The company will replace the bridge, which closed in spring 2018 due to structural deficiencies, the agenda packet said.

The mayor will execute an interlocal agreement with the Hinds County Board of Supervisors to make improvements to Sheffield Court, Sheffield Drive, Sheffield Place and Shanton Drive in Ward 1. Each street will cost $38,000, $120,000, $18,000 and $16,000, respectively, to repair. The goal of the project is to provide a better driving surface for motorists, the agenda packet says.

District 3 Supervisor District 3 and Board President Peggy Calhoun said District 1 Supervisor Robert Graham picked those streets because they were in critical need of being resurfaced.