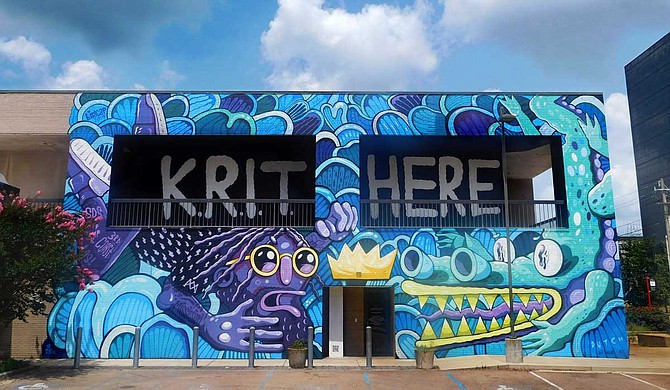 Birdcap, born Michael Roy, designed and painted a Big K.R.I.T mural on the side of the Arts Center of Mississippi in downtown Jackson. Photo by Josh Wright

Michael Roy, an artist and Moss Point, Miss., native, has been drawing for as long as he can remember, but it was attending the Mississippi School of Arts in Brookhaven that solidified art, and murals, as a serious profession for him.

After graduating from MCA in 2009, Roy did not really know where the direction his artwork was going and did not know himself as a person, he says. He backpacked around the country for a few months  before moving to South Korea in 2010.

"I got a job as an illustrator for some magazines," Roy says. "I got into  graffiti with the Korean graffiti scene. That's when I got into murals and got more serious about the current style I'm in. It glued  together, and I started the Birdcap thing.

Roy goes by the moniker Birdcap and describes his style as a hodgepodge of  motifs inspired by graffiti, world mytho-logy and Saturday-morning cartoons.

After living in South Korea for four and a half years, he moved to Memphis, Tenn. While there, he stayed with friends for three years, doing graffiti to get his name out there and trying to work  seriously as an artist.

"After a few years, it got easier. I was painting anywhere I could. I would paint for free in alleys or abandoned buildings," he says.

Roy has painted some murals in Memphis, but recently he got the opportunity to do a mural project for Mississippi native rapper Big K.R.I.T.

He has been listening to the rapper for 10 years, he says, and to him, Big K.R.I.T. is the greatest rapper of the time.

"I remember before my career took off at all, I was painting murals in  abandoned buildings. Me and my friend  (artist) Nosey would hang out  listening to Big K.R.I.T. with $16 in the bank account," he says.

Big K.R.I.T.'s label, MULTI Alumni, reached out to him over Instagram and asked for his information. Dutchington, the rapper's manager, called him about painting murals for Big K.R.I.T., and Roy told him if they could get him flights and hotels, he could paint a mural in any city.

Birdcap painted four murals total in Chicago, Denver, Houston and Jackson. The "Southern Hospitality" murals are Big K.R.I.T.'s gift to his fans, old and new, for supporting his music and vision, the rapper said on his Instagram page.

"This was my ode to you all! It was important to combine my love for the arts and the artist with my love for the people to create a groundbreaking  campaign," he wrote.

The mural project helped promote K.R.I.T's fourth album, "K.R.I.T. Iz Here," which debuted July 12. The murals were part of a contest where fans could visit them and take a picture of the QR code for a chance to win a trip to his album listening party in Atlanta.

Roy said the Jackson mural was more personal because he does not get to paint in his home state often. In the mural, which sits on the side of the Arts Center of  Mississippi, Big K.R.I.T. is diving into some water to capture a crown, and on the other side there is an alligator that is also going after the crown, he said.

"I wanted him to compete against something that's indigenous to Mississippi. I wanted to make it a statement of being a creative in Mississippi and the goal of going after your passion," he says.

"Sometimes it can feel like you're up against the state when you're coming up 'cause there's so little support."

Roy said the rapper makes hustle gospel for people who are born in the middle of nowhere.

"That's why it's so palatable to people in creative fields in the South. It becomes a piece about our shared experiences," he says.

Roy also designed the cover art for the rapper's second single, "Addiction"  featuring Lil Wayne and Saweetie, as well as  illustrations for each song on his album for K.R.I.T's album listening party. He is working on T-shirts for the rapper's "From the South With Love" tour as well.

"It's been surreal. I'm trying to get used to it. Every time I checked on my phone, and it says Big K.R.I.T. tagged you, it's a part of me that goofs out about it," he says.