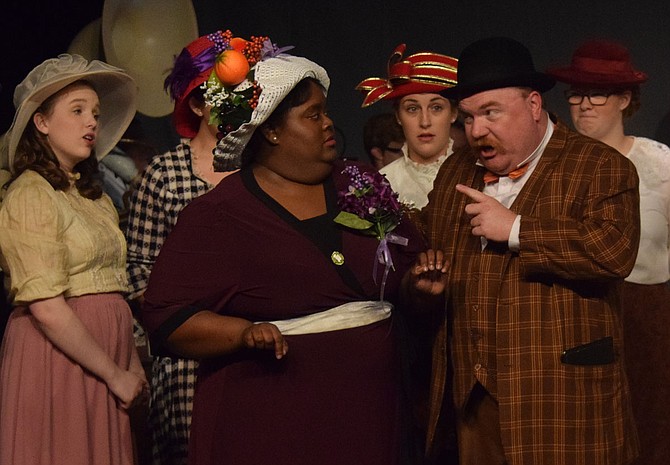 Actor Chris Roebuck paces at the front of the stage at Black Rose Theatre, singing out lines for "The Music Man" as other cast members call back.

His character, Harold Hill, is trying to convince the town that trouble will befall the community with the addition of a pool table at a local billiard parlor. How to prevent that trouble? Forming a boys' band. Hill has plans to sell them instruments and skip town, but his interest in the librarian and the only trained musician in town, Marian Paroo, puts a fork in those plans.

Black Rose is performing the musical Aug. 2-4 and 8-11. The theater's performance will be more stripped down than some other versions, says director Joshua Harris.

"Owing a lot to the small and intimate space there at Black Rose and owing a lot to current trends in musical theater when it comes to revivals today, our production of 'The Music Man' is more of a down-to-earth production," he says. "We're not really concerned as much with the stereotypical spit-and-polish as we are with authenticity, with authenticity in the sound and authenticity in the characters. It's going to be a little more scaled down than other productions of 'The Music Man.'"

Originally, Harris was not much of a fan of the show, he says.

However, after Black Rose asked him to be the director in late 2018, he began researching the musical and found out that playwright Meredith Willson based it on his childhood in Mason City, Iowa.

"It resonated a little bit more with me because it was the story of an actual person," he says. "... I had actually seen other plays that may have on paper been more appealing to me, but 'The Music Man' has been a great match for me."

Black Rose's production will not use any painted background scenery. Instead, the theater will project the scene onto a white screen in the back of the musical's space. One thing Black Rose, is not doing, though, is using canned music, in which musical cues are prerecorded. Instead, the theater has a real band.

"I don't know if my conscience would be clear if I didn't have a visible, live concert band for a show about a marching band," Harris says.

Finding the band was one of the bigger challenges, he says. He needed musicians that could both tackle the level of music in the show and would have time in the summer for the production. Because the vocal parts of the music were not as difficult as they can be, Harris says they were able to work on the purpose behind the music and why a certain character is singing lyrics in certain notes.

"I think you'll see that work come out on stage," he says.

With the musical's first opening in 1957, some parts of the play could seem dated to some audience members (for example, Hill's persistence to win Paroo over can border on harassment), but Harris says "The Music Man" is a production that should not be reimagined too much.

"It is the playwright's life story," he says. "This story was actually inspired by Meredith Willson remembering himself as a 10-year-old."

Willson may have even written himself into one of the characters, but Harris says he will leave audience members to figure that out.